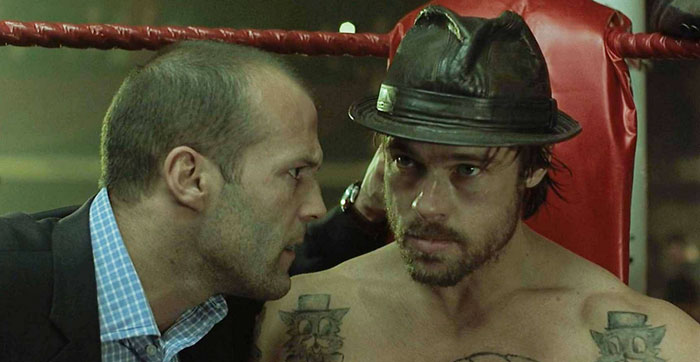 Movie Dirtbags That Get Us Hot And Bothered

Forget the dapper chaps with fine manners, the silver foxes with smooth moves, and the nice guys with mature emotional boundaries. This one goes out to the dirtbags of cinema, who would definitely break your heart—and maybe steal your wallet—but who we lust for all the same.

Brad Pitt as Mickey in Snatch


If I asked you what is Brad Pitt’s most dirtbag role I’m sure a lot of people would answer Tyler Durden. But here’s the thing; Tyler Durden is a male power fantasy. He’s cool, collected, wears stylish clothes and accessorizes well. He oozes charisma. Mickey the Pikey is just incoherent and dangerous. Everything he wears looks like it came out of a box left on the side of the road. It’s unclear when he last showered, if ever. He lies, cheats, steals, drinks constantly, and is more than happy to settle disputes with his deadly fists. “Bareknuckle boxer” is not a career that has any long-term prospects. He also happens to have a same wicked grin and a devil-may-care attitude that would be the start of a very exciting night and an extremely painful morning after. —Genevieve Burgess


The ultimate slacker for the ultimate Gen X movie. He was the perfect combination of greasy hair and well-timed disaffected cynicism. And oh those meaty goddamn hands, how they set my heart (sure, let’s say heart) aflame in the days when I was still young enough to believe the dream. Dyer is a good friend, funny, cute, deep-feeling, artistic, and also broken in a way that he plays out via commitment issues. That’s part of his appeal. IRL he would definitely flee like he did, and he might even come back, but it would only be to flee again, or at best cheat on you mercilessly until you caught him because he gave you chlamydia and then make you feel bad for how bad he feels. But oh how good that happy ending felt, even if it did probably set me back years in finding an actually solid mate. And with “All I Want Is You: by U2 under it? Mwah. —Heather Huntington

Blake Lively as Krista Coughlin in The Town


Does Blake Lively’s character in The Town count as a movie dirtbag? Well, considering that her brother is a bank robber, her sometimes f*ck buddy-who-she-wants-to-be-her-boyfriend is also a bank robber, she helps them set up their bank jobs, thinks it’s funny to sprinkle her drugs in his drink even though he’s a recovering addict, and she considers “You gotta chase the rabbit if you wanna get the tail” as a valuable lesson that her mom once taught her when it comes to dealing with men, she certainly falls into Movie Scumbag territory. But because she looks like Blake Lively and because it’s damn near impossible to make her look that scummy and that unattractive (even The Rhythm Section couldn’t entirely pull that off), the thought of sex while seated in a La-Z-Boy before she smirks right in your face and then leaves because she has other things to do has a lot more appeal than one would think. — Brian Richards


Ah, the cad dirtbag — so irresistible, and so ideally cast as Hugh Grant. Flirty, handsome, polished, charming AF — cad dirtbags like Daniel Cleaver are like uniquely lethal harpy sex vampires. It’s like you’re in on a little joke with them — I know, I’m awful! I shag everything! But then they turn their light on you and say things like, “that’s a silly little dress” and call you by your last name and you’re beans on toast. And sure, maybe somewhere they know that you don’t think you’re quite at their level, so you feel in a way honored to get any of their attention that should probably be lavished on prettier/posher ladies. And maybe they use that to their advantage. And maybe they also really like you, but also will only actually wind up with the posher/prettier lady. Who they will also inevitably cheat on and disappoint. I don’t overidentify with this, I don’t know what you’re talking about. —Heather Huntington

George Clooney as Seth Gecko in From Dusk Till Dawn


The Gecko brothers of Robert Rodriguez’s From Dusk Till Dawn are pure, untethered dirtbags (although the toe-sucker played by Quentin Tarantino is clearly the worst one.) George Clooney is just your run-of-the-mill criminal who’s sick of having to murder so many people but will happily manipulate the hell out of a wayward preacher and his kids for his own personal use. Sure, he likes a strip show now and then but he’s also ready to straight-up slaughter any number of topless vampire babes when the occasion calls for it. He’s maybe less of a dirtbag and more of an amoral scumbag, but that tattoo, man… Just… George Clooney will never EVER be hotter than he was when he took off his dusty coat to reveal a tattoo that stretched from his neck to his wrist. Like any self-respecting dirtbag, he also knows his own self-worth. “I may be a bastard but I’m not a f*cking bastard,” he tells Juliette Lewis as he leaves her for a new life in Mexico. Respect. —Kayleigh Donaldson


The alpha and omega of my dirtbags, the one that started my (very deep, very real) Scottish fetish, Ewan McGregor in Trainspotting. He’s meant to be a heroin addict and generally shitty person (albeit shades less shitty than some of his friends, e.g., Begbie), but all I saw was cute cute cute and hello accent. To the point that my big takeaway from the movie was, “Apparently everyone is on heroin and could be infected with something, so definitely do not let anyone touch you ever, which is very hard because have you seen Ewan McGregor?” What can I say? It was the ’90s and I was not very smart. I still love me a good Scotsman, though, ye ken? —Heather Huntington

Amy Adams as Charlene Fleming in The Fighter


Honestly, my first choice was probably the same as Brian’s above, because there is something about trashy Boston women that is apparently universal. Second on that list of trashy Boston women is Amy Adams in The Fighter. Adams is a very attractive person, obviously. But she never did much for me, until she told a bunch of homely Boston women, “Don’t call me a skank. I’ll rip that nasty hair right out of your head,” and then broke one of their noses. After that, I was in love. —Dustin Rowles

Matt Damon as Donny in EuroTrip


Damon’s been a Hollywood hunk and dashing hero in a slew of films since the mid-90s. Yet the movie where he proved a powderkeg of sexual charisma was the one where he briefly cameoed as a grody punk for a trashy song number. One second, you’re enjoying the gleefully dumb humor of this R-rated comedy. The next, Damon crashes in with a shaved head, soul patch, a tacky tribal neck tattoo, and enough piercings to make your mother wince. It works on him. Especially when he kicks into gear lipsyncing to the undeniable banger, “Scotty Doesn’t Know.” Donny is the kind of dude who definitely smells like stale beer, sweat, and ditch weed. And yet, you want a taste, don’t you? Forget the good will hunting and good boy schtick. Damon’s at his hottest playing the kind douche-bro who relishes in savage PDA, sings about the joys of cheating, and publically brags, “I did her on his birthday!” Do me dirty, baby. —Kristy Puchko