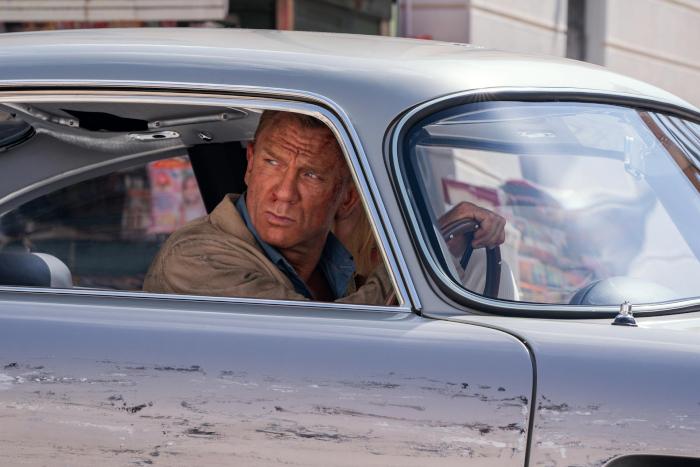 The (Forever Postponed) Future of James Bond: Where Would You Like to See the Franchise Go?

WARNING, HERE BE SPOILERS FOR NO TIME TO DIE

So this tweet was making the rounds yesterday on Twitter’s always nuanced conversation:


Who should be the next James Bond??? pic.twitter.com/NywtYvIN1t

It, of course, angered people: First, they’re accused of segregation, as the Black actors are not mixed with their white counterparts, but the account is a Nigerian content aggregator so … yeah, I’m gonna NOPE. Also, you’ll notice the absence of women, Riz Ahmed, Dev Patel, and the presence of an American. And as much as we love Michael B. Jordan, the one thing we can actually agree on is that James Bond CANNOT be played by an American.

But it once again leads us to a conversation we have at least twice a year, whether there is a new Bond movie coming up or not: Who should be the next Bond. But I think there’s a better question to be made: What should be the future of this whole film series?

Full disclosure: I actually finished watching all the 007 movies just a few months ago, and I haven’t read any of the novels. So according to the average gatekeeper, I’m a phony, a fake Bond nerd. I mean, I didn’t even make the effort to catch Casino Royale in theaters, given that my crush on Eva Green started long before her casting was announced.

And yet I love this series so damn much. I say “series” so that I can give it a veneer of respectability, though I should say franchise. I can’t understand why, because every single part of my brain is aware this is a very dumb, very problematic film series. Also, I will get down to reading them, but I reckon one paragraph of a weaker Le Carré novel is worth all the best parts of Fleming’s writing. Combined. And the comics don’t even go here, they are in a category of their own. Whatever the case, I know I will always be excited about the next installment in the Bond film series.

There is an argument to be made that Bond’s continuous success is due to a carefully cultivated artificial scarcity, but that’s more of a recent development. All the longer gaps between installments happened before and during Craig’s tenure: Four years in between Die Another Day and Casino Royale, four in between Quantum of Solace and Skyfall, and five between Spectre and the original release of No Time to Die. Only the gap between License to Kill and Goldeneye was slightly longer, and that was in between a change of guard and with MGM going under. Nevertheless, there has been a new EON Bond movie every 28 months during a stretch of almost 60 years, with most of the movies being released within two or three years of each other. Of course, contrast that with the MCU, which has released the same amount of films in just 13 years.

The reality is that the series hasn’t had any real competition in its genre/weight class. The Bourne series tried to position itself as a “thinking” (and left-leaning) alternative, delivering a perfect trilogy, but failed to come up with an expanded universe and was capped with a profitable but forgotten fourth entry. The Kingsman ride on Bond’s coattails, but they basically take the most outlandish approaches of the franchise (as with Roger Moore and Die Another Die) and gleefully turn them up to eleven, unashamed of their CGI-reliant style. Back in the 90s, the always watchable The Saint tried and succeeded in making something that could match Bond in style, but failed at the box office (same thing happened to The Man from U.N.C.L.E.). In the 60s, there was an entire subgenre of “eurospy” parodies and copycats that probably left a bigger imprint on future Bond films than Connery’s own tenure. Jack Ryan’s franchise, despite being portrayed by US actors at the prime of their coolness, is too tied to Tom Clancy’s boring, neocon schtick. Then there’s the Mission Impossible series, which could be considered its true competition, were it not for the fact that they have developed their own identity, Tom Cruise’s stunts being just one part of it. If anything, they have more in common with the Fast & Furious franchise, sharing the premise of a chosen family of super-agents fighting against megalomaniac villains. Except that in M:I, it makes sense that the characters would have special forces training.

Nevertheless, all of these franchises have been inspired by Bond in some way or in its entirety, either as a response or earnest tribute. But it has been a long, long time since a Bond film has ever been the one to influence the industry instead of the reverse, and those influences can be traced mostly to Sean Connery’s films. It’s not just about his tenure being the first. His first five films were so successful they made the equivalent, in today’s money, of almost $4.5 billion dollars, in no more than six or seven years. That’s more than enough to become perpetually ingrained in the fabric of global culture. It bears repeating: every single James Bond movie has made money. Maybe No Time to Die could be the exception, but then again, it was an exceptionally troubled release during exceptional times.

However, if there was ever an original identity to Bond, whether in film or in the novels, it has become diluted after 60 years of EON itself copying trends in the film industry, which in turn remixes elements of the series into new pastiches, which are then copied by the original, a feedback loop of Xeroxes of a Xerox.

That’s the secret to the persistent success of the Bond franchise, it has managed to ride on whatever genre, trend or style is popular at the time, but it only adapts its surface level aesthetics without truly letting them enrich the franchise: Blaxploitation in Live and Let Die without true Black representation, just fried chicken and voodoo jokes; Hong Kong martial arts movies in The Man With the Golden Gun, but limited to a single scene and the setting; Star Wars and the promise of the Space Shuttle program in Moonraker, limited to space laser a big space station fight; violent 80s action films in Timothy Dalton’s run (though succeeding at that); Paul Greengrass’s action style and criticism of US foreign policy in Quantum of Solace; The Dark Knight’s psychotic villain that is always ten steps ahead in Skyfall; the realistic aerial stunts from the Mission Impossible movies in Spectre and No Time to Die (they even copied the “stealth HALO jump from a C-17” from Fallout). And of course, the MCU’s serialized storytelling, that ends in No Time to Die (SPOILERS LAST CHANCE) with the protagonist dying a heroic death and leaving behind an adorable little girl.

Copying imagery is a crucial part of the Bond formula, complemented with the girls, the action, the gadgetry, and the fashion. This shouldn’t be a problem in and of itself. But it has kept the series dumb, it has kept it a bunch of parts that don’t make for a sum that is more, it has kept it complacent and it has kept Bond the character as a non-entity that never quite lands: Connery’s would be a great unlikeable character, but he is portrayed as a hero; Lazenby didn’t have the acting prowess to match the journey of his Bond; Moore’s is too whimsical, the epitome of the producers not taking the character seriously; Dalton was pitch perfect but didn’t have enough time; Brosnan’s was perfect, but too empty, a reflection of the 90s; and with Craig, they tried to give him an arc and gave him emotions, but it came across as the producers desperately trying to catch up, as on-screen characters, across every single medium, underwent an exponential jump in complexity.

At every turn, there have been promises and intentions about the future of the series. I patently remember that during the press tour of Casino Royale, Craig wanted Bond to have an affair with a man. Then you have the yearly round of claims that this or that actor of color will be the next Bond, followed by troll backlash. With the same regularity, someone will suggest the possibility of a female 007, followed by an even worse backlash. All these skirmishes don’t address the bigger issue, that EON has never taken any risks, that they are hellbent on protecting the integrity of their IP, even though their formula is based on taking in influences. They have never had the incentive to take their bread and butter seriously, and I don’t mean this in the Snyderverse way, just to stop taking characterization and the implications of the plot as an afterthought. James Bond will never have a future because EON only needs to halfheartedly flow with the future of the industry. They can coast on being a scarce product in the landscape, until the day a true challenger shows up.

If EON really had a vision for Bond’s future, my recommendation is very simple: Just option the comics by Dynamite. They should start with that before even thinking who should play him next. I also subscribe to the ideas in this essay I included here (#shamelessselfplug).

Timing and age kept us from having Idris Elba. Timing also kept us from seeing Chiwetel Ejiofor, my personal favorite, taking on the role. I understand why many would love to see Dev Patel, but apparently he doesn’t want it and personally, I think his (beautiful) face is too sweet. I’m all in for Regé-Jean Page, the fact that he will start in a new version of The Saint is actually, as history has proven, a good sign. If it has to be a white guy, there is a non-obviouys option I think would be perfect: one Jack Lowden. Especially if we go back to the 60s with the character.

With all this said, I still don’t understand why I love this series so much. Does this franchise really matter? Shrugs.

What about you guys, who do you think should be the next Bond? I’d love to hear three types of suggestions: Your actual favorite, the one as a joke, and the “if it has to be a white guy, SIGH”.

Alberto Cox would like EON to know that he would drop everything, and we mean EVERYTHING to write for Bond, and he needs very little. Find him at @ThisAlbertoCox in Twitter and @autos.heroiques in the ‘Gram.

← 'And Just Like That' and the Infantilization of Steve and Miranda | HBO's 'Euphoria' Returns: Follies of Youth →