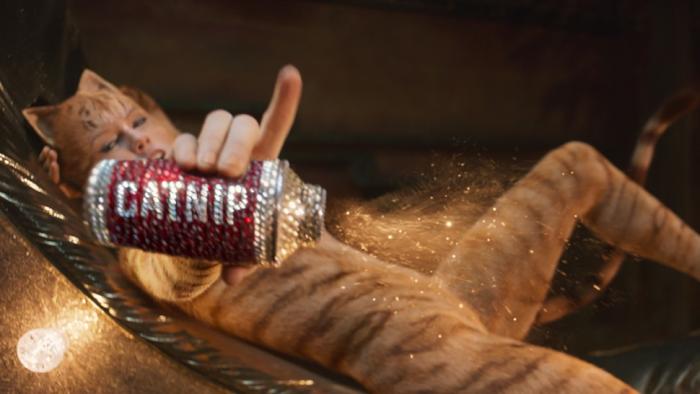 Cats has been a catastrophe for Universal. From its first trailer, its flummoxing “digital fur technology” made this $95 million movie an easy punchline. Critics relished ripping it apart. Awards bodies stuck up their noses at the bold performances of Idris Elba, Jennifer Hudson, and Dame Judi Dench. The Oscars made a mockery of the Best Visual Effects award with the help of Cats co-stars Rebel Wilson and James Corden. Still, Cats is finding its audience in a series of “rowdy” screenings at the Alamo Drafthouse.

The Alamo is a movie theater chain that’s built its reputation on its firm no-talking policy. “Rowdy screenings” are where the rules are bent. Side conversations are still verboten, as this is intended as a communal—albeit cacophonic—experience. However, audiences are encouraged to sing, purr, hiss, meow, roar, and more as they watch the featured film. Last weekend, I was invited to host one of five such showtimes at the Alamo Drafthouse in Brooklyn, New York. This wild time gave me a whole new appreciation for Tom Hooper’s Cats and its evolving fandom.

Revival cinema is a common feature at the Alamo. Terror Tuesdays, Weird Wednesdays, and other film screening series offer audiences the chance to see maligned movies, hidden gems, and boldly bonkers flicks on the big screen. In my experience, the people who turn up for these screenings are primed for fun, either because they are already fans (who maybe know every word by heart), or because they know the film only by its strange reputation and are eager to be shocked or awed. While Cats is still in its first theatrical run, it’s already scored notice from both these groups, and neither was afraid to howl or catcall this unique piece of cinema. As I presented the film last Friday, I asked who in the crowd had seen Cats before, urging them to answer not by show of hands or shouted out affirmations, but with meow for yes and a hiss for no. The loud wave of meows that met me told me we were in for a great time.

Leading up to the rowdy screening, I’d wondered if this experience would be more The Rocky Horror Picture Show or Mystery Science Theater 3000. Would the audience be quoting the movie, singing along, and chanting at the heroes onscreen? Or would they be trying to score laughs with shouted snark? It was a bit of both, with one particularly vocal young man serving as a self-appointed conductor of chants and commentary. Mostly, it was a chorus of voices shouting out in the darkness in a fun mix of praise, revulsion, and frenzy.

During a number involving a chorus line of cockroaches, the audience burst with screams and laughter. Whenever the infamous visual effects flaws revealed completely “un-effected” human hands, the audience would scream out “hands” with a victorious tone. When Jennifer Hudson sang, “Memory,” there were cheers and proclamations she deserved another Oscar, as well as chants of “wipe your nose” and a few napkins waved overhead with a courteous flare. And of course, there was a recurring chant in praise of Judi Dench.

Any time a scene began where this grand dame of stage and screen was soon to appear, a rumble would grow of “Dench, Dench, DENCH!” It was an audience-made drumroll that made her every appearance feel like a magical miracle worthy of Mr. Mistoffelees. There was also much singing from the crowd. The audience clapped to the beat of one tune after another, then belted out the silly songs about gumby cats, railway cats, mischievous cats, fickle cats, and a fat cat who dreams only of gluttony. These moments took me back to the fantastic thrill of the Frozen sing-along release, where a theater full of adults on a Friday night gathered together to let it go with all they had.

Ahead of the Cats rowdy screening, I wondered what I should expect from the crowd. Would they be fans who liked the film in earnest or came to laugh at it? What I found was both, often within the same fan. Yes, they came to laugh at the horrendously horrific character designs that never claw their way out of the uncanny valley. They came to hoot at a Hollywood hunk who dances naked, save for flesh-colored “digital fur technology” covering his broad shoulders, long legs, and digitally flattened crotch. But they also came to belt out a Broadway standard alongside Jennifer Hudson, whom they proclaimed “QUEEN” at every opportunity. They came to cheer two-time Academy Award-nominee Ian McKellen gamely lap water out of a cat bowl, then champion Judi Dench finally living her Cats dream, decades after missing her chance to play Grizabella and Jennyanydots on the West End. They came to squeal over Jason Derulo as Rum Tum Tugger just as teen girls once squealed over The Beatles. They reveled in this movie that is so bad and so good often in the very same moment, and in a way that was suitably outrageous.

There’s a distinct joy in loving a “bad” movie. The world tells you it’s dumb or ugly or terrible. To you, however, its treasures feel like an illicit secret buried beneath its discourse. There’s a defiant fun in others not getting it. Yet at the Cats rowdy screening, everyone is in the know about this infamous movie’s treasures. We came to feel the thrill of wonder and wtf that Cats gives, whether Hooper intended it or not. Whether the film is good or bad, is beside the point. How it made this audience feel was everything. It made us feel everything, from horror to elation, from sidesplitting laughs to snot-wobbling sobs, and the mind-melting mix of excitement and terror when you realize Judi Dench as Old Deuteronomy is staring right at you to tell you a cat is not a dog.

The Alamo’s Cats rowdy screenings give space to movie musical fans who can appreciate camp and missteps alongside flawless diva moments and the perfectly executed choreography of Francesca Hayword and Robbie Fairchild as Victoria and Munkustrap. Sitting among them, I was thrilled from the first frame to the last, relishing in the big swing of this mad movie, even when it whiffs hard. I went in having a grudging respect for Cats and came out in awe of it. Not so much for the movie it is, but for what it inspires in people. I not only witnessed an audience coming together as a yowling clowder but also saw history in the making. As the screenings sell out and rage on, Cats’s cinematic legacy evolves into one that might well rival The Room’s or Rocky Horror.

So make the Jellicle choice. Relish in the antici……….pation, and make a memory you’ll never forget. Go see Cats at a rowdy screening near you.

Cats is still in theaters.

← Harrison Ford Confirms 'Indiana Jones 5' Is Still a Thing That's Happening | Review: 'Sinner' Season 3 Is Just Over Here Minding Its Own Business and Being Great →