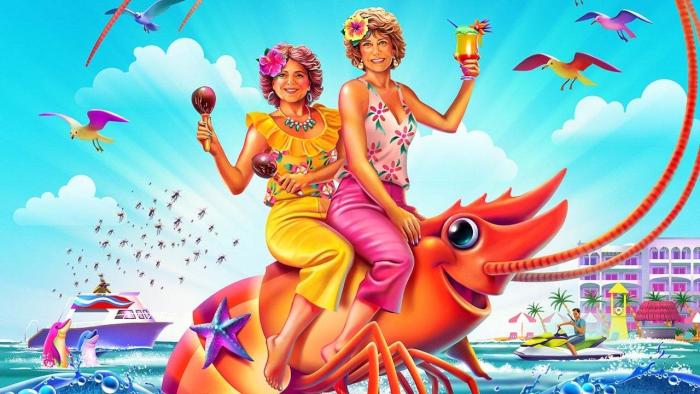 The Best Films of 2021 So Far, And Where To Watch Them

We’ve hit the halfway point of 2021. So, now’s the time to reflect on the best cinema we’ve seen so far. Pajiba’s film critics have put our heads together, compiling a list of our favorites, from streaming, theatrical releases, and festivals. Good news for you: many of these are easy to watch right now.

Be sure to click through the titles to the reviews to get the full picture of these films’ greatness.

Barb and Star Go To Vista Del Mar
“Seagulls in the sand can you hear my prayer: Send me a warm-hearted goofball good-time about two middle-aged Stellas trying to get their grooves back in the trippiest Sandals Resorts commercial ever created! Well somebody (somebody probably named Trish) was up there listening, and this weekend, swimming on the generous backs of two big turtles here to make all our day-spa dreams come true, is Barb and Star Go to Vista Del Mar. Directed by Josh Greenbaum and co-written by and co-starring the team behind Bridesmaids Kristen Wiig and Annie Mumulo, this thing’s a sweetly surreal sparkling diamond in the surf, Tommy Bahama approved and tested. Get to this movie fast, then take it slow…” - Jason Adams

In The Heights
“The long-gestating film adaptation of In The Heights might have been filmed pre-Covid, but it feels tailor-made to lure audiences back into theaters—the sort of movie that’s made to be seen on a big screen with a tub of popcorn and an Icee. It’s a hefty dose of summer sunshine that can be enjoyed in air-conditioned, mosquito-free comfort. The summer tentpole is back!” -Ciara Wardlow
Watch here or in theaters.

Werewolves Within
“Werewolves Within comes together like the cup of hot chocolate you’d want to be sipping by the in-world fire. It’s cozy. That’s what [Josh] Ruben does; he creates horror spaces that feel welcoming, beckoning you into them with a pointed claw. Along with [screenwriter Mishna] Wolff, he’s created a thicker story that feels very “now,” born of modern themes and bolstered by modern vernacular. Drop a monster into the mix and arm the characters with jokes and firearms, and you’ve got something to howl about.” - Lindsay Traves
Now in theaters; available on digital on July 2.

Censor
“The tales of horror filmmakers tussling with the censors reining them in are the stuff of a full century of movie-geek legend. So it seems quite literally insane to me that Censor here marks the first time I’m seeing that relationship play out on-screen. Major props to [writer/director Prano] Bailey-Bond for seeing the story sitting right in front of us all these years. But even beyond that Bailey-Bond doesn’t make a wrong turn, using that story to investigate the reciprocatory exchange between viewer and violence.” -Jason Adams
Watch On Demand.

Luca
“Childhood memories just burn brighter. The grass greener, the sky more blue. I remember the summertime fields where my best friend and I would play as a buzzing, lush kaleidoscope of color and life. I have no doubt if I went back today these same spots would now seem muddy and small; the magic of our imaginations seeped out like ink washed off by a storm. So one of the great joys of film animation has been when it’s well wielded to carry us back to such hand-drawn places, simplifying everything to tactility and Crayola-instinct; to where we believed the stars were little fishes in the pool of the sky. And just because we believed it, it was so. Pixar’s latest animated feature, Luca, wields this sort of simplicity with such grace and ease that I quadruple dare you to not be swept up, up, and away.” -Jason Adams
Watch here.

Nobody
“Nobody never asks you to take it too seriously. The emotional beats don’t land, and the plot threads are flimsy, but who cares? That’s not why anyone is here. We’re here to see our favorite TV actor [Bob Odenkirk] thrust into a gaggle of melees, taking and giving hits in good measure. We’re here for a collection of fight scenes strung together by a lot of ‘you messed with the wrong guy!’s. I can’t say Hutch is nothing like John Wick, but Wick would never get this much blood on his suit.” - Lindsay Traves
Watch here.

White Tiger
“Overall a provocative, wonderfully energetic tale of class, corruption, and people being terrible in a deeply watchable way, White Tiger is well worth your time despite some unfortunate pacing issues. A much-needed revisionist take on the feel-good fantastical nonsense that is the standard rags-to-riches story, it’s the sort of bold, razor-sharp commentary that asks the tough questions while still being hugely entertaining—a winning combination.” -Ciara Wardlow
Watch here.

Days of the Bagnold Summer
“Coming-of-age comedies tend to traffic in exaggeration. Perhaps the teens talk in rapid-fire dialogue that’s an intoxicating blend of pseudo-intellectualism and hip slang suitable for catchphrases and merch. Perhaps the tone of the humor is ramped to raunchy to reflect raging hormones, or broad to revel in juvenalia. Perhaps the every-teen hero is meant to be ordinary, yet boasts a jaw-dropping fashion sense, flawless skin, and looks like they’ve got a whole style squad at the ready for every vexation and victory. Somehow, Days of the Bagnold Summer rejects every one of these cherished cliches, yet is still winsome, funny, and flat-out fantastic. As I explain, you’ll think ‘this shouldn’t work,’ but I assure you, it truly does!” -Kristy Puchko
Watch here.

Shiva Baby
“The line Shiva Baby walks between gently mocking the terrible situation that Danielle has created for herself and deeply empathizing with her desire to take charge of her own life is its greatest strength. Shaped by [Emma] Seligman’s exceedingly clever script and Sennott’s smartly self-aware performance, Shiva Baby is a pitch-black comedy that not only lives up to the cheekiness of that bagel-and-cream-cheese-gown poster, but surpasses it.” -Roxana Hadadi
Watch here.

Oxygen
“Oxygen shoves you in a box so that you can brush up against infinity. Those questions of identity, of who we are when everything is stripped away come into focus. It’s a film that succeeds at being more than the sum of its parts by intertwining a story of life finding a way with whispers of a ship of Theseus.” —Steven Lloyd Wilson
Watch here.

Undine
“On paper, the plot of Undine seems sparse, but that simplicity adds to its effectiveness. Each new detail about Christoph and Undine’s relationship has the potential to tip the story more into drama, romance, or horror, and [Christian] Petzold cycles through the genres with intentionality. Beer and Rogowski sizzle together, and the latter seems well on his way to becoming Petzold’s new muse, a la Nina Hoss. Undine certainly luxuriates in its own strangeness, and its slow pacing and puzzling narrative might grate on some. But as another example of Petzold’s interest in the stories that shaped us, and as an offering of where those stories could go next, Undine is compelling, unsettling, and as beautiful as it is baffling.” -Roxana Hadadi
Watch here.

Holler
“[Nicole] Riegel’s quiet confidence in constructing a tale of politics, poverty, and girlhood is extraordinary. It’s dizzying to know this is her first feature film. She refuses to talk down to her audience, giving us all we need in visuals and slight exposition cues. She spares us histrionics because such garishness would be a disservice to the spirit of her defiant protagonist. With this, she builds a film that is heart-rattlingly poignant, haunting, and among the best of the year.” -Kristy Puchko
Watch here.

The Father
“I understand that The Father is a film that a lot of people will want to avoid. How do you glowingly recommend something that’s so difficult to watch and tackles a very real illness that has devastated countless lives? You know that stories like this can’t and won’t end well. What’s the happy-ever-after for a disease that robs you of your very being? Hell, writing this review was hard enough because it meant revisiting particular scenes and sobbing my heart out for a few minutes before I could go on. Still, for those who can take it…The Father is the best possible example of how a story like this can and should be told.” —Kayleigh Donaldson
Watch Here.

The Perfect Candidate
“‘Girl power’ is too simplistic of a term to fully capture the energy filmmaker Haifaa Al Mansour builds into her films. Still, on a surface level, the phrase applies. In 2012’s Wadjda, the first feature-length Saudi film made by a female director, Al Mansour captured a girl’s desire for freedom in the face of traditionally conservative thinking. (A solid trio of viewing would be Wadjda, the Dardenne brothers’ The Kid with a Bike, and Maïmouna Doucouré’s Cuties.) After her subsequent films, 2017’s Mary Shelley and 2018’s Nappily Ever After, took her outside of the country narratively, Al Mansour returns to Saudi Arabia with The Perfect Candidate.” -Roxana Hadadi
Watch here.

Swan Song
“Udo Kier is a revelation, unfurling viciousness and vulnerability with a masterful flourish of his bejeweled fingers. Watching his Mr. Pat come alive is mesmerizing and inspiring … perhaps especially after a year in lockdown. One sequence in particular, where Mr. Pat parties with the current LGBTIA+ community of Sandusky, filled my heart with joy and hope, and my eyes with tears. 2020’s lockdown robbed Pride Month from Americans, but in this magical movie, I felt that familiar rush of elation, pride, and community as if I were on that dance floor too. I’m crying now thinking back on it, an emotion too big and bold to keep inside. That is the power of Swan Song. It’s a fantastic film about the radical act of being truly seen while queer. Beautiful, smart, irreverent, and really f*cking funny, it’s a comedy that celebrates, condemns, and champions, all with the extravagant attitude of a queen. Simply put, it’s divine.” -Kristy Puchko
Coming to theaters on August 6, then On Demand August on 13.

← Review: Netflix's 'America: The Motion Picture' is a Very Special Kind of Bad | 5 Shows After Dark: 'The Beast Must Die' Premiere AMC, 'When Sharks Attack' on National Geographic Channel →