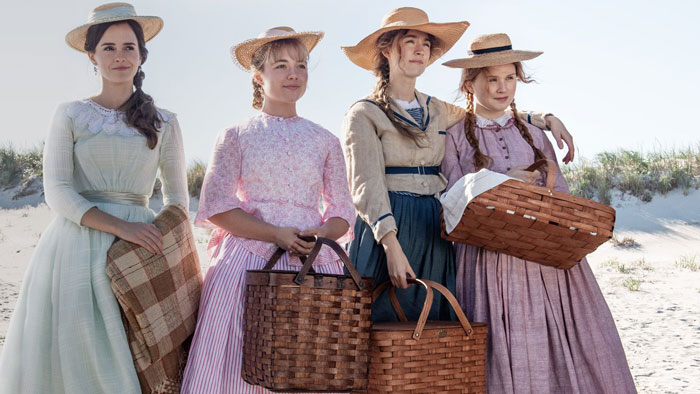 #10 Booksmart —Booksmart is Olivia Wilde’s directorial debut, but I would prefer to use the term declaration. This is a movie that knows exactly what it is created by a group of women who know exactly what they want to say. Wilde smoothly directs a script written by Susanna Fogel (who wrote The Spy Who Dumped Me), Katie Silberman (who wrote the screenplay for Isn’t It Romantic), and Emily Halpern and Sarah Haskins (who co-created that Malin Akerman TV project Trophy Wife); casts an array of diverse young actors; tells a story that isn’t cruel to any gender or race or sexuality; and makes the whole thing disgustingly funny. —Roxana Hadadi

#9 The Lighthouse — Anybody who watched Robert Eggers’ first film, The Witch, and wondered whether its forays into comedy were intentional (reminder: The Witch’s villain is a goat called Black Phillip) will receive giddy confirmation from watching The Lighthouse, which pushes the boundaries of form even further, tipping into outright farce on several occasions. That this comes in a film that pulsates with anxiety and a turbulent sense of impending doom makes Eggers’ achievement all the more extraordinary. The Lighthouse is a dizzying, joyous celebration, a riot of smell and clanging noise dressed up in formally austere arthouse clothing, whose unsettling crescendo of derangement pushes the spectator into a state of semi-rapture. —Caspar Salmon

#8 High Flying Bird —High Flying Bird is a film that benefits through multiple viewings (I’ve watched it three times since it premiered on Friday, and noticed something new every time), whose character motivations click together more and more upon further consideration, and whose final messaging is not unlike one of my favorites from last year, Boots Riley’s Sorry to Bother You. You can try to enact change in the world, and you can try to make things better, and you can try to build coalitions, and you can try to foster understanding, and sometimes you just have to smash it all down. If the men in charge won’t hear you, you have to remind them. Wealth isn’t the only form of power. There’s labor, too. —Roxana Hadadi

#7 The Last Black Man in San Francisco —“If you’re going to San Francisco/Be sure to wear some flowers in your hair … There’s a whole generation/With a new explanation,” Scott McKenzie sang in “San Francisco,” but the wide-openness those people are looking for is lost, traded in for multimillion-dollar condos, for overpriced acai bowl food trucks, for high-paying tech jobs at meaningless startups. The Last Black Man in San Francisco is a eulogy for an American way of life that doesn’t exist anymore, and how it finds poignant beauty in undeniable tragedy will hit you right in the heart. —Roxana Hadadi

#6 Once Upon A Time…In Hollywood —Quentin Tarantino is interested in how much badness we’ll tolerate from his characters, how much violence we’ll go along with, how much narcissism we’ll accept. Only one person is fully good in OUATIH, and Tarantino pays homage to Sharon Tate in a way that ties her legacy to the promise California used to hold. Margot Robbie is ethereal and effervescent here, every bit a contrast to Rick and Cliff. These are men who assume that others will be immediately in awe of their performances and their talent; Robbie’s Tate, rather, regards her work with pride but waits for the reactions of others. She doesn’t assume people will love her, but she’s willing to earn it. Her whole future awaits. — Roxana Hadadi

#5 Hustlers —Hustlers is an exhilaratingly entertaining crime-drama that gives the gangster fantasy that’s so often male-focused a ferociously feminine spin. Rather than suits and the best table at a swanky nightclub, it doles out designer bags, swanky fur coats, and magnificent Manhattan penthouses piled high with poshly wrapped presents come Christmas. But more than the material goods, Hustlers explores the sisterhood of these gangster girls. As she did with Seeking A Friend At The End Of The World, [Lorene] Scafaria centers her fantastic film on the bond between two people, and how it pulls them through even the most outrageous adventure. —Kristy Puchko

#4 The Irishman (tie) — At once fresh and pleasantly familiar, innovative and nostalgic, watching The Irishman feels like meeting an old friend for the first time — the sort of delightful impossibility that can only be crafted by a true magician. After all this time, [Martin] Scorsese’s still got it, and it’s a joy to behold. — Ciara Wardlow

#4. Little Women (tie) — [Greta] Gerwig’s scripts offer moments of striking vulnerability, like a broken-armed Lady Bird asking her mom, “What if this is the best version (of myself)?” Or a fired-up Jo confessing the about the burn on her dress, not only revealing her sloppiness but exposing her family’s poverty. And in each, [Saoirse] Ronan delivers a performance that’s so rich with layers, each viewing allows you to see another, be it agony, rebellion, or curiosity. With a glance, she can convey so much, and knock us out, and Gerwig knows it. These moments let us sink in the skin of these girls, who are strong yet fragile, magnificent and messy. And through them, we might feel seen, loved, and forgiven for our faults. Or at the very least, we feel alive—radiantly, messily, and unmistakably alive! — Kristy Puchko

#3 Us — [Jordan] Peele manipulates his audience masterfully, breaking moments of unbearable tension with brilliantly curated comic relief that lasts only a second, just enough to pop the balloon before throwing another at you. The film’s color contrast is its own story, straying from sunny beaches to tension-laden darkness to an almost clinically bright, neon-lit nightmare that’s far scarier than it should probably be. Every inch of every frame is meticulously, almost obsessively designed, and it’s a film that will once again likely require multiple viewings to find every vividly imagined bit of imagery. — TK Burton

#2 Knives Out —There’s much more to this mystery than meets the eye. Just when you might think you have things figured out, you realize the movie’s been toying with you. What a delightful realization that is! This central mystery is masterfully constructed, and frankly, I’d expect nothing less from the mastermind behind Brick and The Brothers Bloom, two mystery movies that are only enriched once the secrets are all unveiled. Like those films, Johnson’s impeccable taste in casting makes a stellar script into a phenomenally thrilling film. —Kristy Puchko

#1 Parasite — The film is consistently funny, but its jokes are like acid burning through your flesh; they’ll leave scars. Every actor is called upon to deliver performances on top of performances, and they all knock it out, finding the exact right balance of authenticity and artifice. And while the plot has certain moments of profound shock, the overall vibe is more of a steady, thorough burn, the kind of incineration that starts at the end of a cigarette and then consumes its length and then keeps on spreading, producing ash and smoke and poison. You can put out a fire, but you can’t reverse it. Whatever it destroys stays destroyed. — Roxana Hadadi

← Everyone on 'The View' Hates Meghan McCain Now, Including Abby | Ranking the Contestants on Netflix's 'The Circle.' Who Do We Love? Who Do We Hate? →