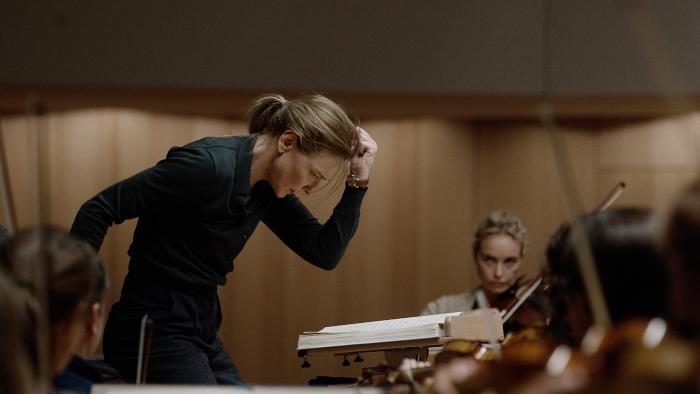 'Tár' and the Language of Prestige

By now, you’ll probably have heard the news: Tár is a damn good movie. It’s about a lot of things: separating Art from the Artist, stories we tell ourselves about who we’re supposed to be, and the cut-throat top-tier minefield of the art world. Before we go further, let’s clarify: here be spoilers. Seriously, go watch the movie then come back. I’ll wait.

Tár, which follows the fictional titular composer—a role written for and conquered by Cate Blanchett—spends a good portion of its opening sequences communicating the heights of cultural cache that Lydia Tár occupies. To wit, we begin the film listening to the list of stunning accolades she’s accumulated over her career—as recited by an interviewer from The New Yorker in a packed auditorium.

It’s immediately clear as soon as the interview gets underway that Tár speaks this language of intellectualism and articulate artistry with masterful precision. She has made herself at home in this world of sharp, powerful people. There’s a small moment when she flinches during the interviewer’s introduction though: when he lists her name, somewhat ironically, alongside Mel Brooks as a rare EGOT winner. Tár’s mouth subtly tightens: Mel Brooks belongs nowhere near her accolades, she seems to imply, because Mel Brooks is not high art.

Let’s get one thing straight: the bullshit distinctions between high and low art are as much products of the prestige industry as the Oscars—just much more deeply culturally rooted. Shakespeare wrote bawdy comedies full of dick jokes. Literary fiction is as much a genre of writing as high fantasy. Schemas and rules and value hierarchies hand out cultural cache according to its proximity to the most money, or the most fame, or the most education. Different styles, forms, and approaches to art all have their own particular beauty, their own excitement, their own value. Nobody’s better. And the patterns of how cultural cache are assigned are flexible with trends in consumption, just as in any other industry: twenty years ago, sci-fi wasn’t firmly literary as it’s allowed to be today (though of course we must call it speculative fiction as a dog whistle that we don’t mean we read that sci-fi). (Manifesto over, back to the movie…)

But when you’re in that world, prestige is tangible. Tár makes it visible: the clean beauty of everything Tár touches, the precision of everyone around her, the expectations of tradition and behavior. It’s palpable through the screen. It’s a secure, fine, glassy kind of security to belong to the echelons that Tár calls home. And that’s part of her character’s power: she is fully aware of her power as gatekeeper and wields it with all the subtlety and mercilessness of her lofty artworld status.

The phrase the canon haunts conversations throughout the movie, along with specific knowledge of notable performances and their nuances, the intricate trivia of composers’ lives and the histories associated with their works. There is a full language within these discussions, especially in Tár’s conversations with her fellow musical heavyweights, a language of prestige, of proving I belong here, I am unchallengeable. It’s a language that personally I feel I’ve been taught to aspire to through various mazes of higher education and literary circles. It’s never articulated outright—privilege rarely is—only osmosed atmospherically. A kind of watchful stiffness steps in when you know you’re playing the prestige game.

Capturing that sense of preciously safeguarded cultural cache is one more thing that Tár gets very right. However, the style with which the character embraces her own power is tremendously nuanced—particularly in regard to gender. On one hand, Tár proudly proclaims herself a “U-Haul lesbian” during a (brilliant) scene about the line between artistry and artist. But her persona is crafted to a T, embracing various aspects of the power available to her. Rolling Stone did a fantastic job dissecting the gendered aspects of that power, how Tár embraces the aura of male genius, feeding from that particular well of cultural cache.

The cultural product that is Tár, the conductor, the musical figurehead, is a product as constructed, produced, and monetized as her book cover or her careful portraits. But what makes the movie shine is that she’s also for real. This would be a much easier story to tell if it were simply the story of a high-achieving celebrity at the top of her field, maintaining and wielding the power on which her persona rests. No, instead, this is also the story of an artist wholly dedicated to her craft, with such a deep and brilliant and exceptional understanding of that craft that I personally found it very hard to root against her. How can you root against the art, when it’s this good? But what price does the art pay when it must belong to the prestige industry to be recognized for its brilliance? Tár herself made tremendous personal sacrifices to belong to that world, to give herself a chance: it isn’t until nearly the end of the movie that it’s revealed even her name is a construct, a gesture toward the privilege machine. Really, she’s from a working-class New Jersey family who call her something entirely different than the powerful artist she has branded herself as.

The prestige and the art itself are not so easy to separate—the prestige industry, that is, its language and strictures. Tár takes separating the art from the artist to a whole new level of nuance. Suddenly prestige is a crystal castle housing, protecting, and celebrating the art inside. In short, making that art possible. Tár makes it clear, through its intricate language of prestige and gatekeeping, that Tár is not simply an artist whose remarkable career is threatened by her own behavior. She is part of the machinery of prestige, part of a centuries-old mechanism of translating talent into something far more siloed and arcane: beauty, but a beauty engineered to be for the few and the anointed.

And where does that commentary leave us, in a film angled to conquer the very system of awards, honors, critical accolades, and timeless recognition that the film itself depicts, albeit in a different creative field?


← Everything You Need to Know About 'Buffy the Vampire Slayer' On Its 25th Anniversary | Review: Amazon Prime's 'The Devil's Hour, 'The Ending Explained (Spoilers) →