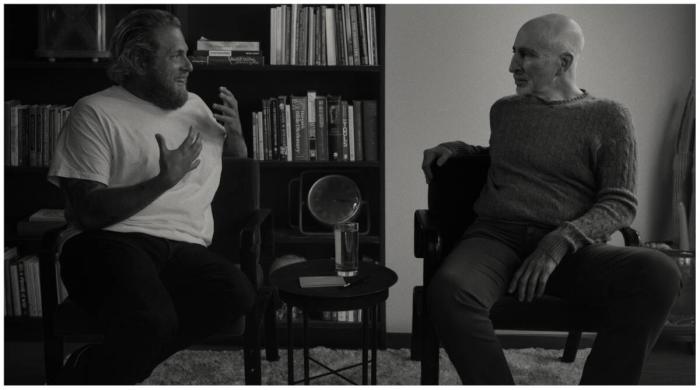 ‘Stutz’: Jonah Hill Made a Movie About His Therapist and It’s Interesting

As a public figure, Jonah Hill has been through a lot. The actor, director, and Frat Pack-adjacent funny guy has a bunch of awards to his name, a slew of hit movies, and BFFs that include Leonardo DiCaprio. He’s also been the subject of much scrutiny over his weight, attitude, and anxiety. Several months ago, he announced that, in order to prioritize his mental health, he would not enter the exhausting and demanding publicity trail for his next film as a director. A few publications tried to spin that as selfish, but most people seemed supportive. After all, what makes more sense than putting your well-being first when you’ve made a movie about your therapist?

With Stutz, his second film behind the camera after Mid 90s, Hill puts himself front and center alongside the man whom he credits with changing his life. Phil Stutz is a former prison psychiatrist who set up practice in Los Angeles in the ’80s and quickly became one of the mental health favorites of the Hollywood set (yes, he is Goop approved.) He’s also the co-author of The Tools, a self-help book that claims to offer techniques ‘to help you find courage, creativity, and willpower—and inspire you to live life in forward motion.’

Reading up on a foul-mouthed therapist who has no qualms about getting close to his patients, it’s hard not to feel somewhat trepidatious about Stutz. Hill explains in the film’s opening that his life has gotten immeasurably better since working with Stutz, and he hopes that, by introducing him to a wider audience, his methods could help others. Going into Stutz, I had flashbacks to Oprah plugging The Secret on her show as the ultimate fix-it for all of your problems. Mercifully, Hill is keenly self-aware of the pitfalls of making a movie not only about therapy but his own therapist and mental health journey. How do you make a film about that? Stutz knows it’s kind of impossible.

I can’t say that Stutz entirely works, but I don’t think Stutz itself believes everything about it works either. It’s an intrinsically flawed set-up that acts as a knowing break of the fourth wall as much as a shaky foundation for its intent. Hill has put himself into a tough bind. He opens up with remarkable candor on many issues but tries to pull away on others, insisting the film is about Stutz and not him. Using the Errol Morris-style direct-to-camera approach, allowing both men to stare into the eyes of the viewer, they open up about deaths in their families, Hill’s body image problems (for which he brings out a life-sized cardboard cut-out of his younger self), and Stutz’s dealings with Parkinson’s disease. In the first act, that hesitation and artifice of honesty can’t be ignored.

Therapy is not something that can present itself in a universal way, and attempting to do so can offer helpful aspects, but Hill and Stutz know there’s no way to act as a one-stop guide for everyone tuning into Netflix. Stutz is unconventional, sure, especially in the way he seems to encourage Hill’s closeness to him beyond professional boundaries, but he’s mercifully not a Dr. Phil or Dr. Oz type (although all of his tools do seem to have buzzword-friendly names that made me cringe somewhat.) Given that he’s the star of the show, he seems refreshingly uninterested in latching onto that spotlight.

So, how do you acknowledge the elephant in the room? How do you deal with the cold hard reality that making a movie about your own dang therapist is a bad idea? Well, you say it out loud and you pull the set apart. 20 minutes in, Hill pulls back the curtain on his production. What seems like a documentary is really a sophisticated production. They’ve been filming for two years, not one typical session. Stutz’s office is actually a set with a green screen. Hill is even wearing a wig to keep continuity in place. If you’re going to try and sell authenticity to your audience, especially on such a sensitive subject, then maybe your sole option is to own your bullsh*t. It’s a great moment in the film, perhaps the only way to do it, but one that still pulls the rug from underneath your feet. Not only does Hill let us in on the directorial process but he shows it to Stutz.

And now, Hill can’t avoid being truly open, even though it brings him evident pain. He talks about his self-loathing over his changing body and other people’s reactions to it. He brings his mother (who looks SO much like Beanie Feldstein) to a session. The back-and-forth between therapist and patient, subject and filmmaker, offers clashes that seek satisfying answers where there aren’t any. Can it be about the journey, not the destination, during a therapy session?

I’m not sure how helpful, overall, Stutz will be to general viewers. Stutz’s tools seem sensible and accessible. It certainly can’t hurt to let people have more means to look after their mental well-being, particularly since therapy is, for way too many, overpriced and out of reach. Still, don’t view Stutz as The Solution. It’s also worth remembering that these tools are The Tools, which are a part of Stutz’s brand that can handily be purchased in a book available now on Amazon with glowing cover quotes from Mehmet Oz and Marianne Williamson! So, even at its most earnest, there’s an undeniable sense of this operation being a TED Talk-esque sales pitch.

Yet, it is oddly comforting to see Hill, an actor about whom I was previously ambivalent, seem so truly at ease with himself. This method is working for him and that’s good to see. Anyone who is in or has been in therapy can relate to that sense of lightness that comes from being able to find solutions to previously impossible binds that have your brain in knots. Is Stutz somewhat self-indulgent in that regard? Yeah, but it’s a good thing to indulge in.


Stutz is available to watch now on Netflix.