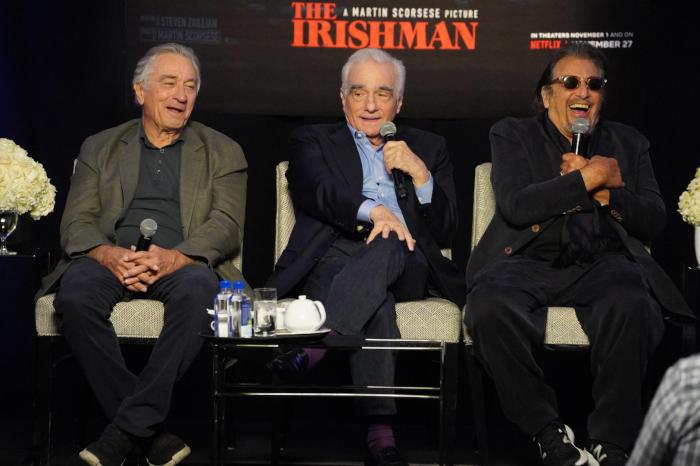 Today, Martin Scorsese’s latest, The Irishman, hits theaters. This critically heralded crime-drama reunites Robert De Niro and Al Pacino to tell the incredible story of alleged mafia hitman Frank “The Irishman” Sheeran, and what he may have had to do with the disappearance of Teamsters leader Jimmy Hoffa. To celebrate the film’s release, Netflix invited press from across the country to The Irishman’s Los Angeles premiere. Pajiba was in attendance for the big night, and the press conference the following day, where Pacino settled in to tell stories of his early days as an actor.

The press conference held at the Four Seasons brought Scorsese, De Niro, and Pacino on stage, where they talked broadly about their careers and the movie. Thankfully, no one asked about the MCU, so Scorsese discussed his decades-long attraction to stories of criminals and corruption.

“In terms of corruption, that part of a human being,” Scorsese said. “In The Asphalt Jungle, Louis Calhern has a line that’s great where it goes, his wife says ‘Why do you always’— he’s a lawyer—‘Why do you always defend the bad guys and gangsters and that sort of thing?’ He goes, ‘Well, I look at crime as sort of a left-handed endeavor of the human condition.’

“The whole sense of that’s part of who we are,” Scorsese continued, “And it’s always there. The dark forces are always there. Do we succumb to them? All the time. Do we get sucked in and pulled back out? I mean, this is the whole thing. It has to do with our pride, too, in the case of Jimmy (Hoffa) when he keeps saying it’s my union, it damn well is his union, but he lost it. In any event, it’s more than corruption. It’s about what’s in ourselves as human beings.”

Pacino was less interested in talking about the film. When asked what The Irishman might look like if he and De Niro had swapped the roles of Hoffa and Sheeran, he opted instead to tell a story about his days at Lee Strasberg’s Acting Studio. He warned the assembled press this story would be a long one, teasing, “Finally, a question that I got a parable for. I’m so ready.” He turned to his colleagues on stage and said, “Sorry, guys,” then “Anybody got a pillow?”

For the proper effect, please read the following with Pacino’s voice in your head. I’ve tried to recreate the flow and emphasis as best I can.

Here it is. I was at the Actors Studio. A young man at the Actors Studio. I was about 25 at the time. And I was too shy to do a scene there. I’ve been there for about six months and I would be sitting, watching, and I would go home. I didn’t know anyone there. Then I finally signed up to do a scene, because at the Studio, you have sessions…I was going to do a Hickey from Eugene O’Neill’s Iceman Cometh and Hamlet. I wrote it down [on the sign-in sheet]. And it was my turn—finally—to go up in front of the great Lee Strasberg at the Actors Studio—you know—the hallowed Actors Studio with all these people who sit out there. And what they do is you do a scene and afterward they sort of—they don’t criticize it—they discuss it with Lee as the moderator. Because it is for professionals, It’s not an acting school, the Actors Studio.

So I went up there and I did a monologue from The Iceman Cometh, which I had done all my life. And I did it. And it was over. And then I turned around and I started Hamlet, ‘Oh what a rogue and—’ Because he’d looked at the card and he’d said, ‘Al Pacino. Hamlet? And Hickey from The Iceman Cometh.’

So I thought, ‘Alright. Okay. Let’s still do it.’ And I got up there and I did Hickey, I did it all, then I turned around and did Hamlet. And he stopped the class, he said to me, ‘Alright. I want you to do Hickey as Hamlet. And Hamlet as Hickey.’ What did I do? IMMEDIATELY! I went into Hickey as Hamlet and Hamlet as Hickey. I did ‘em both! And you know what he said? ‘We take in all kinds here!’

He told us the audience at the Actors Studio gave him a standing ovation. Then, he apologized for going on and shrugged. Scorsese said supportively, “It’s good.” Then, the assembled press whooped and applauded, because Al Pacino.

The Irishman is now in limited release. It hits Netflix on November 27.

← What's Going on With D'arcy Carden's Bad Janet in 'The Good Place'? | Let's Talk About the Democrats (and Specifically, South Carolina) →