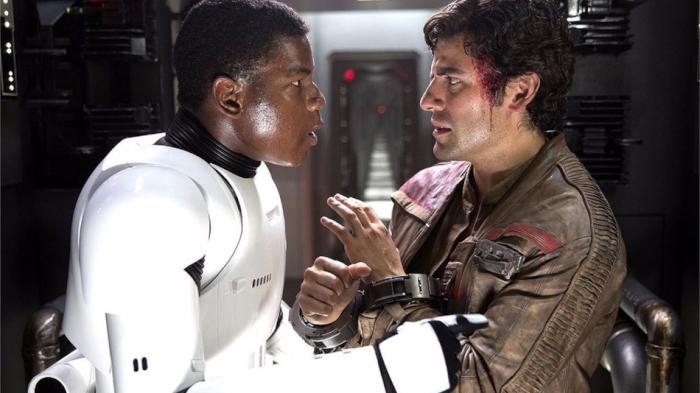 Since the Poe Dameron first flirted with Finn, there’s been a new hope that Star Wars movies might recognize the existence of LGBTQA+ people in a galaxy far far away. Shippers dreamed up plenty of scenarios over the course of The Force Awakens and The Last Jedi. But when The Rise Of Skywalker finally brought its gay moment, it was of the Disney variety, meaning it was bullshit.

VERY minor spoilers for Star Wars: The Rise Of Skywalker below.

Following in the footsteps of Beauty and the Beast’s “exclusively gay moment,” Avengers: Endgame’s “first openly gay character” in the MCU, and Frozen 2’s Schrödinger’s cat of Elsa’s could-be queerness, Star Wars: The Rise Of Skywalker featured a blink-and-you’ll-miss-it moment of LGBTQA+ representation when two female rebels kiss in the finale celebration.

This brief same-sex smooch between two minor characters was enough for THR to declare this “makes history.” Meanwhile, this latest Star Wars installment refused to confirm a Poe and Finn romance and introduced two new female characters for each man to flirt with. It was a “no homo” device as blatant as wedging Sharon Carter as a love interest into Captain America’s arc to shut down Stucky shippers’ speculations. It’s as if Disney forgets bi people don’t exist. We do. Hi. And we’re claiming Poe, Finn, and Cap!

In an interview with Variety, The Rise of Skywalker’s director/co-writer J.J. Abrams suggested the LGBQTA+ community should be grateful for this scrap, saying, “In the case of the LGBTQ community, it was important to me that people who go to see this movie feel that they’re being represented in the film.”

The bar for LGBTQA+ representation in major studio releases remains so low that Babu Frik would trip on it. Thanks, J.J.

Nonetheless, this kiss has been cut from the Singapore release of The Rise of Skywalker. The New York Times reports that keeping the kiss in would have bumped the film’s rating from PG-13 to NC-16, barring those under 16 from admittance, thereby potentially crippling its profits there.

When conversations about LGBTQA+ representation in-studio cinema arises, Disney defenders often suggest that such representation would risk a film’s release in China, which boasts heavy box office promise along with strict guidelines about the content of theatrical imports. However, Variety reports China’s censors did not cut this kiss, noting, “Though homosexuality is no longer a crime in China and no longer classified as a mental illness, censors continue to be strict - but also inconsistent - regarding gay depictions on screen.”

Yet these censors let a quick same-sex kiss between two characters even die-hard Star Wars fans would struggle to namecheck get by? What a clearly resounding moment in cinematic history for gay rights.

← 'Star Wars,' Disney, JJ Abrams, and the Fetish of Nostalgia | The Best and Worst of 'Outlander' Season 3, Now On Netflix →