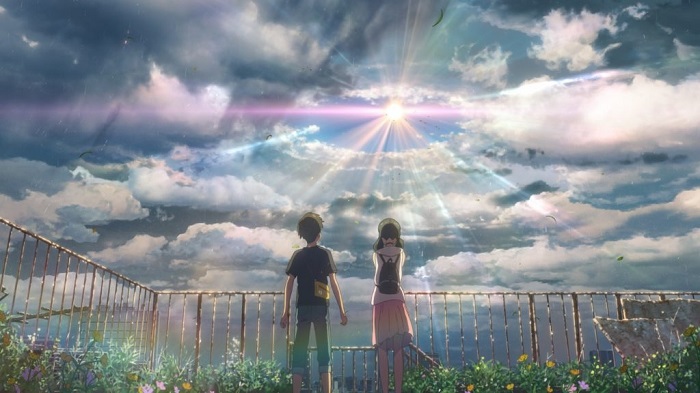 Japanese filmmaker Makoto Shinkai has said in interviews that he does not want to be called the new Hayao Miyazaki, the co-founder of Studio Ghibli, and yet the comparison has been made many times anyway. But to a certain degree, I get it: Shinkai has named the iconic Miyazaki as an influence, and Shinkai’s two phenomenally successful films, 2016’s Your Name and last year’s Weathering With You—which is playing in limited release around the U.S.—share some DNA with Studio Ghibli’s particular combination of whimsy and melancholy. And when it comes to cinematic considerations of the harmful effects of industrialism and climate change, then too does Weathering With You in particular overlap with Studio Ghibli’s Nausicaä of the Valley of the Wind and Princess Mononoke, which depict young female warriors battling to protect their natural world from pillaging invaders. What I can’t stop thinking about after seeing Weathering With You, though, is an existential question regarding climate change that spooks me to my core: What if we’re already too late?

SPOILERS BELOW FOR WEATHERING WITH YOU, BE AWARE

Petr has written about overwhelming climate change dread for us before, and I think you should read his essay “On Trying, and Failing, To Deal With Climate Anxiety” because, you know, it’s honest and brutal and great. And I also think you should see Weathering With You, which is beautifully animated, achingly romantic, and thoughtfully incorporates elements of Japanese folklore. I’ve been thinking about the film more and more as I watch David Attenborough’s currently airing nature documentary, the insanely detailed and sprawling Seven Worlds, One Planet, and after recently revisiting Bong Joon-ho’s Best Picture winner Parasite, which features a climactic flood sequence that makes clear the yawning gap between the wealthy and the poor. Weathering With You also explores the myriad effects of climate change on our industrialized society, but I think its message is one of simultaneous resignedness and hope: The natural world has intentions of its own, and our lives don’t matter very much at all—so we better enjoy them while we can. 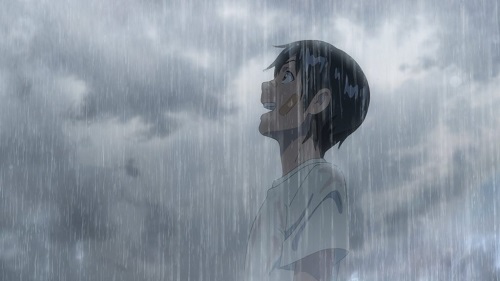 Weathering With You is set in Tokyo, which is deluged throughout the film with perpetual, endless rain. It rains all night. It rains all day. Every so often, a raincloud dumps a particularly concentrated amount of rain on a certain area, like a bucket of water being flipped upside down. Streets are flooded; cars and motorcycles can’t get through. Passengers on ships flee below deck to escape being soaked. And all the activities that people like doing when it’s dry and sunny outside—playing in the park, going on a picnic, shopping in an outdoor bazaar, soccer games and birthday parties and all that sort of thing—are on hold.

Into this perpetually soggy locale arrives teen runaway Hodaka Morishima (voiced by Kotaro Daigo), who has fled his island home to what is essentially homelessness in Tokyo, until he connects with the tabloid journalist Keisuke Suga (voiced by Shun Oguri). Keisuke saved him from being swept off a ferry during a particularly nasty storm, and soon Keisuke is housing Hodaka, too, essentially employing him as a publishing assistant. With his niece Natsumi (voiced by Tsubasa Honda), Suga runs a magazine that investigates the supernatural, folklore, and urban legends, and Hodaka begins accompanying Natsumi on interviews and assignments. Over and over again, they keep hearing the story of a “sunshine girl,” a young woman whose prayers can cause the rain to stop. “Messing with nature always has a cost,” someone warns: “Whoever uses too much weather power gets spirited away.” Hodaka is skeptical, and Suga totally disbelieving, but when the former meets Hina Amano (voiced by Nana Mori), well, she seems like the real deal.

With a raindrop-shaped pendant always at her neck, Hina is bubbly, friendly, and practically the personification of the sunshine that arrives after her prayers. The clouds part, the rain stops, and light finally breaks through, pausing the months of bad weather. And as people become increasingly aware of her ability, with Hodaka’s help, Hina sets up a “Sunshine for You” website so she can start offering her services to whomever can pay. “We used to have beautiful springs and summers,” Suga’s mother says, and while that’s not the case anymore, at least Hina can offer a little bit of happiness. 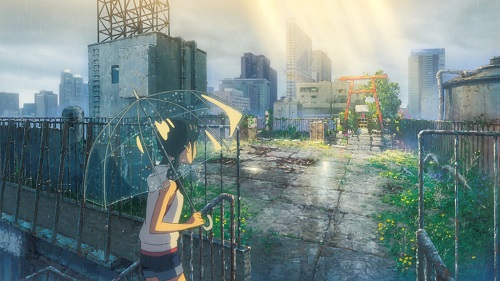 But as Hodaka begins to fall in love with Hina, Weathering With You shifts away from a narrative that suggests that the key to stopping climate change is individual action, and instead toward a plot that makes plain that the problem is bigger than the efforts of just one person. With each prayer, Hina gives away some of herself; we see that her body is losing its physical form as she incrementally transforms into water. The rain never stops for very long; more and more portions of Tokyo, and smaller islands around it, are flooding for good. “A blue sky makes you feel happy you’re alive,” but at what cost to Hina?

Much of the romance of Weathering With You involves the lengths to which Hodaka will go to save Hina, including his travel through a shrine gate to the sky world where Hina is trapped among the clouds and schools of fish made out of water, a “deeper unknown world than the sea,” as a character observes earlier in the film. And while Hina never exactly voices the same level of romantic interest in Hodaka that he does in her, their bond is incredibly strong, and their sacrifices for each other make clear their loyalty and commitment. But Weathering With You also gives power to the older generation throughout the film, who warn of the toll of being a “weather maiden” and who talk of humanity’s lack of power against the natural world. And in fact, once Hodaka saves Hina and they return to Earth, her prayers seem to stop working. The rain keeps falling. Three years later, a grandmother who Hina and Hodaka met during Hina’s “sunshine girl” days notes that Tokyo, now mostly submerged, has “gone back to its original self.”

All that’s left to do, then, is to keep on living. Hodaka and Hina, after Hodaka finishes his probationary period for various crimes he committed while trying to save Hina, are eventually reunited; he interrupts her mid-prayer, and although we don’t see if her wishes bring back the sunlight, you can infer from three years of constant rain that her powers are gone. Still, they have each other. Suga is shown playing with his daughter, who despite her asthma has adapted to the constantly rainy climate; they seem closer than before. And Tokyo itself has transformed, with people moving deeper into the city as the fringes of the island return to the water.

Perhaps this feels like a placation, a sort of conciliatory “Nature and humanity can coexist” message. And I do think there is some of that in the ending of Weathering With You, which does communicate some happiness for its characters without, like Parasite does, demonstrating the utterly devastating effects of the flood for the city’s poor. But I think it’s inarguable that Weathering With You also makes plain that to a certain degree, we’re already too late to fix what we’ve fucked up. We’ve lost the sense of balance that our ancestors had with our environment. We’ve forgotten the warnings from the folklore, the caution hidden in our myths. At a certain point, maybe all you can do is accept that we’ve lost, and that your individual life is all you can be responsible for. “The world’s always been crazy” and “I’m sure we’re gonna be OK” are some of the last lines in Weathering With You, but I’m not so convinced of that last bit, to be honest. Maybe we’ll be alright in this specific moment, but the people after us? They deserve sunshine, too.

Weathering With You is playing in limited release around the U.S.