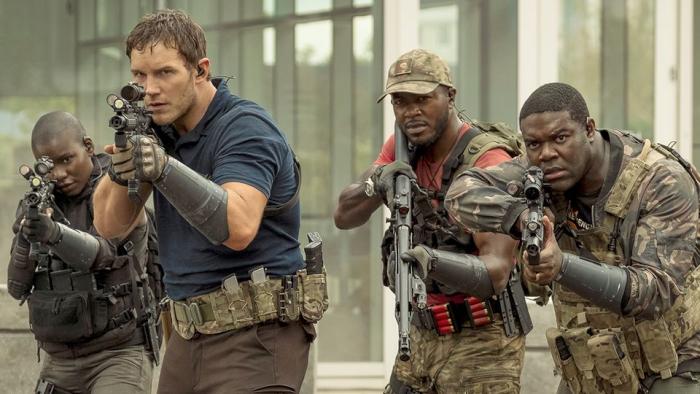 On Prime Video: 'The Tomorrow War' Review: Kyle Reese Did Not Die for This Bulls**t

The Tomorrow War is the latest entry in terrible science fiction movies released for Independence Day because nothing says freedom like punching aliens in the mouth.

Directed by Chris McKay, the movie centers on humanity being on the verge of annihilation by an alien invasion a few decades in the future. So naturally, they build a time machine. Rather than do anything remotely intelligent with their time machine, they just draft a bunch of unqualified people and human wave them unto the breach, dear friends. Chris Pratt stars as the obligatory former special forces soldier who decides to save the future because, you know, he has a daughter. And as the father of a daughter, he can understand why the world ending might be bad.

I’m going to try to focus on the positive. To wit: while it might be 138 minutes long, at least it’s not 139 minutes.
What else? There is some excellent creature design in play, I can at least give them that. The alien race called the White Spikes are vicious and massive constructions like hairless albino bears with tentacles. That can also shoot harpoon thingies out of their tentacle whats-its. And glide. And burrow. And at one point swim en masse to a fortress dozens of miles off the coast. They’d be unbeatable Door Dash delivery monsters. But they look fantastic.

The first views of them are harrowing, their grotesque faces peeking from smoke and darkness, their throats swelling with a gleeful clicking that thrums from their gullets as they spot humans, like a scaled-up nightmare of the way your cat clicks at birds flitting outside the window. That’s just gorgeous original design work with top-notch CGI amidst forty years of xenomorph rip-offs.

It’s all wasted on endless tedious gunfights with rifles that always hold exactly enough bullets to run out when a White Spike closes to tickling range. Then, the chargee either dies horribly or—if they have a laminated protagonist card—they drop the rifle to pull out a patented hero pistol which amazingly gets the job done. Like, eight times that happened. Eight. Times.

Wait, I was trying to be positive. Um. Oh! So Chris Pratt’s estranged father in the movie is played by J. K. Simmons, and someone told him he was going to be in an action movie, so he decided he was going to finally use that Marvel personal trainer they gave him three Spider-men ago. More like J. Jonah Jackedson, am I right? That was terrible, I apologize. But seriously, I think he could choke out a rhinoceros.

Ah, and Sam Richardson, bless Sam Richardson squeezing gold out of the failure sack of Zach Dean’s script. He just flat out brings VEEP’s Richard Splett to the alien apocalypse, and it is a joyous and effervescent relief to allay Chris Pratt’s soldier cosplay. Richardson has a masterful ability to light up the screen with sweetness and good-natured drollness. “I’m glad Will Smith didn’t have to see this” he observes as they survey a Miami annihilated by tentacle monsters.

It’s when playing off of Richardson’s friendly goofiness that Pratt most shines because you can practically sense the relief as he regresses to shades of what we loved about Guardians of the Galaxy’s Peter Quill and Parks and Recreation’s Andy Dwyer. Until the script demands he start rattling off “sir, yes sir” and dramatically grunting and shooting things again.

See how many positive things I managed to cram into this review? I can’t take it anymore, so let’s talk problems. That would be the rest of the movie.

Hot Tub Time Machine is a better time travel movie than whatever this is.

There are many different shades of time travel in fiction. The most common is the Terminator or Back to the Future one in which the moment you go back in time and change anything, the future has changed and the old version of the future is gone. There’s the All You Zombies or 12 Monkeys variety in which time travel is possible but it’s not that you can’t change the past but that you already have. And then there’s the alternate-timelines version, in which a change to the past spins off a new alternate timeline.

Cool, be any of those. The key is that you have to pick one because otherwise, your story is completely incoherent. The Tomorrow War is a time travel movie that cannot decide how its own time travel actually works.
Spoilers ahead for the final act of The Tomorrow War.
At the beginning, we’re explicitly told by the time travelers that we’re in option B. The timeline cannot be changed. The last half of the movie is Chris Pratt returning to the present in order to change the timeline and succeeding, a la option A.

This isn’t a matter of ah okay the first guy must have been wrong and then they learn the truth. It’s a matter of the movie’s entire set up depending on that being the case. The movie goes out of its way to explain that the reason that they don’t just nuke the aliens at the appropriate time when they land is because the timeline can’t be changed. And since the movie has millions of people being drafted, sent to the future, and then coming back to the present after fighting … the timeline has to have changed. Because in the original timeline that led to their apocalyptic future, they have no records or memory of time travelers showing up.

Screw going back and stepping on a butterfly, they show up on television in the middle of the World Cup live, announce what’s happening, and then get millions of people killed, and nothing changed the future. The setup of the movie proves its own setup incoherent because the moment they go back in time they can see that the future hasn’t changed … despite their presence in the past by definition meaning the timeline has noticeably changed. I mean, COME ON. Kyle Reese did not die for this bullshit.

That’s without even getting into the utterly incomprehensibly stupid sequence of logic that passes for a plot. See, they need soldiers in the future, so they institute a worldwide draft and send tons of people forward in time. But all of these civilians? They literally give them an afternoon of training, hand them a gun, and zip them into a war zone where they all die. If they survive for a week, they’re zapped back to the present. Because if we’ve learned anything from history, it’s that the most effective military force is completely unqualified people given no training or information and then sent on a seven-day tour of duty before retiring.

At no point does The Tomorrow War try to explain why any of this makes sense to anyone. On the contrary, the characters — okay, Richard Splett to be specific — point all of this idiocy out including the nonsensical way that the time travelers strip of them certain items (like cargo shorts) while leaving them with other random things (like sending some people forward in the business suit they were wearing when they were drafted).

They hammer so hard on how nothing that is happening makes the slightest bit of sense that I was convinced that the first half of the movie was much better than it was. Because I assumed that they were pointing out all of these flaws in their own logic because they were building towards some sort of reveal of what was really going on. But nope, all of the matter-of-fact pointing out of flaws was just the script shooting itself repeatedly in the foot to highlight its own inadequacies.

That odd obsessive harping on its own inconsistencies convinces me that at some point in the process this script was way better than what actually made it onto the screen. It has kernels of themes it never does anything with but are present throughout. Of parents realizing they were failures. Of being confronted with being a failure in a future you haven’t yet lived. Of parents looking with pride and awe upon children now grown who have exceeded your wildest dreams. Of sacrificing everything to give others a chance.

There’s speculation on the internet from defenders of the film that the time travel in the film is actually option C. That the apocalyptic future knows that it cannot change the past to save themselves, but knows that every change it makes in the past spins off alternate timelines. There’s a gorgeous seed of an idea there, of a future where the last survivors know they are doomed and instead of living out their lives the best they can, sacrifice everything to develop a toxin that can kill the creatures. They know full well they are doomed, but die to ensure there is a future where that’s not the case.

But that doesn’t resolve the incoherence of the plot, or any of the other inconsistencies pointed out by our once and future president Splett. It’s a glimpse though of a story they might have told before it was diced and reedited and beaten to death by studio committee.

That would be a beautiful story. It’s not the story that’s on the screen.

The Tomorrow War is streaming on Prime Video.

← Review: Steven Soderbergh's 'No Sudden Move' Plays it Too Subtle for its Own Good | How the John Mulaney and Olivia Munn Pictures Show Why Celebrity Tabloids Still Matter in the Social Media Age →