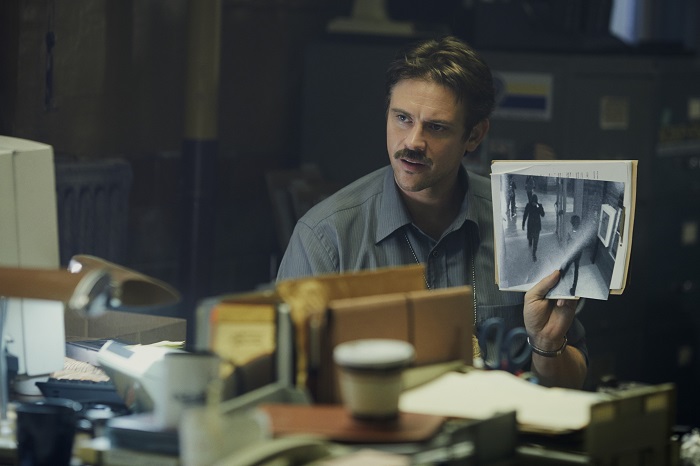 Spoilers: ‘In the Shadow of the Moon’ is Inconsistently Fascinating, Often Muddled, and Totally Ignorant of Why Time Travel Rules

So this is how I ended up watching In the Shadow of the Moon on Netflix last night, which is being marketed as a “crime drama.” And it mostly is, but it’s also a sci-fi movie, and also a race-relations saga, and a hero’s journey, and also an intergenerational family story, and … it’s way too many goddamn things. Way too many! I don’t even know what this movie wanted to be, but it’s so muddled it’s hard to tell! I need to complain about this!

The film by director Jim Mickle (of the TV show Hap and Leonard and the fairly good thriller Cold in July, with Michael C. Hall and Sam Shepard, RIP) and writers Gregory Weidman and Geoffrey Tock (who worked on the TV show version of Bradley Cooper’s Limitless and the amazingly good-bad CBS show Zoo, about animals going wild!) begins in 2024, when we see the aftermath of a gigantic explosion in downtown Philadelphia. Windows are shattered up and down numerous buildings. There’s smoke everywhere. And an altered version of the American flag flutters in front of us, with five or so stars instead of 50. Hold that thought!

THEN we jump back to 1988, with a grotesque, astonishingly bloody array of deaths: A bus driver, a professional piano player, and a diner cook all suffer massive hemorrhaging and bleed out. Blood is everywhere, gushing from their eyes, noses, ears, mouths; their brain matter oozes out; they are left basically hollow—and the only mark left on their bodies is three little pinpricks on the back of their necks in the shape of a triangle. Beat cop Thomas Lockhart (Holbrook) sees an opportunity for himself and partner Maddox (Bokeem Woodbine): If they can figure out who killed these people, or what is connecting them, maybe they’ll secure detective. 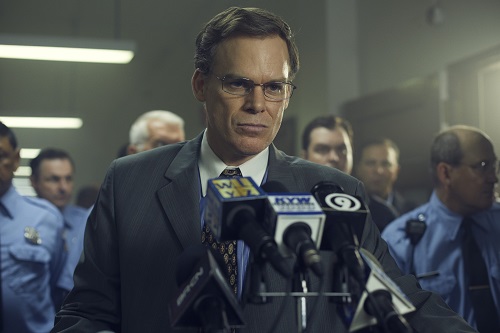 Lock’s detective brother-in-law Holt (Michael C. Hall, working one of the best Philly accents I’ve ever heard, in that it sounds exactly like the dying Baltimore accent) isn’t really looking for the help—he would rather Lock take care of his pregnant sister and his upcoming daughter instead of stepping on Holt’s toes. But when Lock does catch up with the killer, a young black woman in a hoodie (Cleopatra Coleman) in an subway station, she says things he doesn’t understand. She knows his name. She apologizes for what happens to Maddox. And she tells him “see you soon,” before being dissected into two by an oncoming train.

Whoa, right? Wild! And then In the Shadow of the Moon makes its first turn: Fridging the wife. Because of course Lock’s wife dies in labor, leaving him with a daughter he has to raise by himself. We jump forward to 9 years later, when we learn that annual protests are held throughout Philadelphia. Protesters ask “Who was she?” about the black woman Holt killed who was never identified, and this is when the movie tries to say something about race, but fails. Because Holt isn’t really bothered by the protests; he thinks they’re out of hand, and he’s more concerned with grieving his wife than the mysterious woman who died. Until the killings happen again, and he realizes that the woman is back: But how?

Finally, an hour in, the movie introduces its sci-fi element with Dr. Naveen Rao (Rudi Dharmalingam), a physicist who corners Lock and explains how a certain lunar cycle could create a sort of bridge between two worlds. Maybe, the woman who is killing these people isn’t even of this time. It takes an hour to get to this point! An HOUR! And because I value you, I’ll jump forward, too: In 9-year gaps, In the Shadow of the Moon unveils that what connects the victims is that they’re all future white supremacists. Yes! They’re all members of some alt-right white-America-first group, and the woman who is traveling back in time is killing them one by one to avoid a race-riot civil war in the future. That’s what we see in 2024: A bombing that kills 11,000 people, organized by this group, with their own special flag. The bombing then leads to a civil war that kills millions. And it turns out that the woman who is traveling back in time to kill these people before they can start this war, Rya? She’s Lock’s biracial granddaughter. Did you get it? Because she’s both races together, which is what we need to fix America, and because Lock is the one who told her to do this. DID YOU GET IT??? 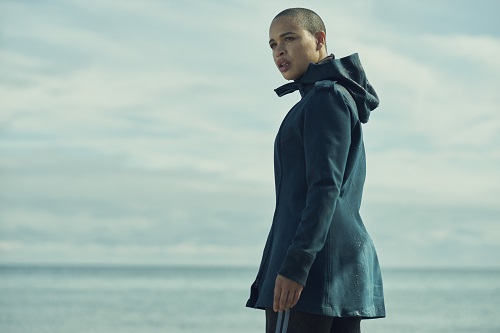 I actually think In the Shadow of the Moon raises a very interesting question: If you could kill people before they come criminals, would you? It’s a familiar sci-fi idea, one we’ve seen in Minority Report, and it’s also a fantastical scenario we’ve seen in movies like Quentin Tarantino’s Inglourious Basterds and Once Upon a Time … in Hollywood. But there’s no actual exploration of morality here. Lock spends 9 years camping out on a beach waiting for the next time Rya comes back after he knows that the people she’s killing are white supremacist separatists, but he still calls them “innocent,” but then we learn that later on he realizes they’re bad? Why didn’t you realize that already in those 9 years? And yet, does that automatically mean all of those people—and their entire families, as Rao reveals—should be murdered? I don’t have the answer for that, but the movie doesn’t, either. And what is frustrating about this entire line of thinking is that, as we know from our current reality, racism doesn’t exist in a vacuum. Racism takes many forms, grows from many sources. Would killing a few people solve the entire problem?

There are so many other ways In the Shadow of the Moon could have explored this idea: Instead of beginning the film in 1988, why not set it in the present day? Why not focus on an online conspiracy-theorist group like QAnon, who we know has already incited people to violence? That would help the film feel more relevant, and more aware of how violence and radicalization occur. Or, why not set the film in the future, and tell it from Rya’s perspective? Show us her journey, her decision to be the woman who goes back in time and sacrifices herself for the greater good. Show us the civil war, and focus on the people of color fighting back against these racist villains, and give us the perspective of that experience. But focusing on a white detective who has to realize that racism is bad because he has a biracial granddaughter, and whose entire motivation is fueled by his dead wife, and whose journey is, frankly, pretty boring compared with those of the other characters we meet? Come on, man! That’s the most uninteresting way to tell this story!

I wrote about Synchronic, another time-travel-involving crime film, a few weeks ago after seeing it at the Toronto International Film Festival, and I kept thinking of Synchronic while watching In the Shadow of the Moon. That film wasn’t perfect, but it did what all time-travel movies should do: Focus on the perspective of the person doing the time travel! That’s what made Anthony Mackie’s role in Synchronic so compelling! The movie was exceptional at demonstrating to us why time travel was imperative for that story! If you’re going to go the sci-fi route, make that choice matter. But In the Shadow of the Moon takes a colossal misstep in throwing in time travel without exploring the details of it or making it clear why that element is integral to this story. The film’s one clever element is making Lock’s forward-only understanding of time and Rya’s backward-only journey through time intersect in their meetings every 9 years, but that’s about the only fun thing the movie does with this premise. If you could have made a better, more interesting movie by setting it entirely in the future and focusing on this race-inspired civil war, you should have done that.

In the Shadow of the Moon visually goes for the bluish-tinged look that so many of these urban thrillers have, which is fine if uninspired, and Holbrook is effective enough, although the character is severely underwritten. Ultimately, though, what you’ll remember of this movie is the exceptionally gross way the racists often die—including one scene where that diner cook falls forward onto the grill flattop, and his oozing brains get caught in the grease trap—and if that comeuppance was what In the Shadow of the Moon wanted to focus on, that should have been what this movie was! But then leave out the time travel. Leave out the cop-working-to-become-a-detective subplot. Don’t give us a narrative exposition dump from Rya in the final 10 minutes of the film that explains everything the script couldn’t. “You will love. And you will heal. You will teach me how to live. And you will make me who I am. A fighter. Just like you. Because right now both of our lives are about to begin,” Rya solemnly tells Lock. Cool. That sounds like a more-intriguing movie than the one we got!

In the Shadow of the Moon is streaming on Netflix as of September 27, 2019.

← Sitcom Watch: 'Superstore,' 'Sunnyside,' 'Perfect Harmony,' and 'The Unicorn' | 'Women Of Reddit, What Do Men Do They Think Is Okay But Is Actually Creepy?' →