Spoilers: About the Ending of ‘Candyman’ and How the Film Can’t Decide How to Treat Its Main Character

MANY, MANY SPOILERS FOR THE NEW CANDYMAN FOLLOW, SO BE AWARE

Let me get this out of the way first: I love the original Candyman, it has given me more nightmares than most horror movies, and I found the new Candyman so thoroughly underwhelming that I did not even jump or scream once. I wasn’t scared, and I was also underwhelmed by the repetition—but lack of nuance—in the film’s social justice messaging. There were certain scenes where my partner and I turned to each other and said, “Wait, what just happened?” because the script was so nonsensical, and although some of the kills were solid (the art gallery, the critic’s apartment) nothing felt particularly impactful because of the disjointed pacing. Disappointing all around, I thought!

I know opinions on this one vary—our very own Ciara Wardlow found the film quite entertaining, while some other critics like Angelica Jade Bastién at Vulture and Robert Daniels at Polygon basically ether-ed it—and as always, I think that if you like a movie, more power to you and your enjoyment. But my main issue with Nia DaCosta’s Candyman is that it felt to me like three different scripts mashed into one unwieldy whole, and I think the film’s incredibly muddled third act captures that.

A certain question has nagged me since I watched the movie last week: What the hell was that ending? I don’t mean the “Nu Candyman is summoned by his girlfriend to kill a bunch of white cops,” which is clearly a scene screenwriters DaCosta, Jordan Peele, and Win Rosenfeld came up with and then tried to form the film around. On a visceral level, sure, it is great to watch Candyman attack the manifestations of oppression that have long preyed upon Cabrini-Green, and it all syncs with the “say his name” idea. It doesn’t make much logical sense that Candyman wouldn’t kill Brianna (Teyonah Parris), his summoner, since we’ve seen every iteration of Candyman immediately slaughter the people who dared mention his name five times in a mirror: he kills children, he kills high schoolers, he kills douchey art scene people, he kills critics. But the film clearly wanted to end on a statement and a reconfiguration of Candyman as a kind of folk hero, and do you, I guess.

Yet how the film gets there is what I remain puzzled by, and I think it’s because Candyman can’t quite decide what approach it wants to take. Is it a reboot? A remake? A retcon? A sequel? A CGI-de-aged Tony Todd appears in the film’s final moments, and it made me grimace at how silly this technology can look! That nod, coupled with how a solid third of this film is just animated flashback sequences that fill in our narrative, indicate that Candyman is perhaps too indebted to the past. Which leads us to what I can’t figure out: What is the point of Colman Domingo’s character, Burke? I will never complain about Domingo in any movie, but the character of Burke makes zero sense in terms of what he has the power to do. (Also: Why give this character the same name as the psychiatrist from the first film? This is confusing!) 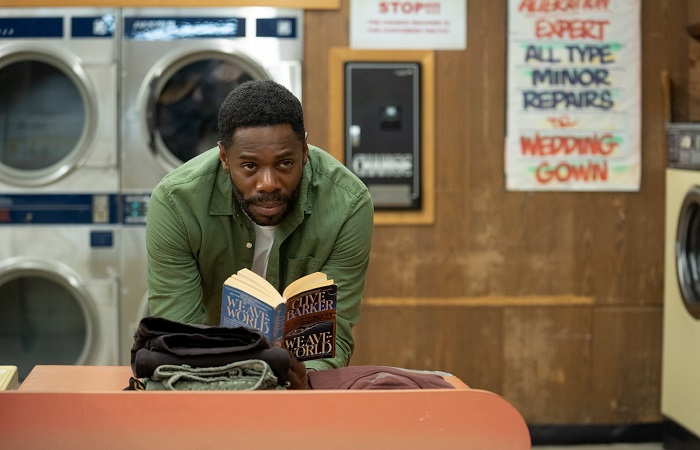 Because let’s go over this: What causes Candyman? On the one hand, the film suggests that main character Anthony McCoy (Yahya Abdul-Mateen II), an artist from Chicago’s South Side, is intrinsically drawn to the Candyman story once he moves into the newly gentrified Cabrini-Green. There is some kind of pull that he cannot explain, and his curiosity is exacerbated by a physical reaction to a mysterious bee bite that he receives while investigating the church from the first film. For some reason, no one seems to notice that this bee bite turns Anthony’s arm into a mass of rotting, scabbing flesh that oozes pus. The wound keeps growing and keeps spreading (over how much time is unclear; the movie is bad at delineating days vs. weeks) until eventually it reaches his face and neck and resembles serious burns. We finally learn that Anthony was the baby from the first Candyman film who was kidnapped by Candyman and eventually saved by Helen Lyle (Virginia Madsen) from burning in a bonfire here in Cabrini-Green.

If you didn’t remember these details from the first Candyman, the scene where a very fucked-up-looking Anthony confronts his mother Anne-Marie (Vanessa Estelle Williams, reprising her role) would have solid dramatic impact. But if you do remember these details, once again, this reveal doesn’t quite land, because you remembered who Anthony was already. Anthony does all this research into the Candyman legend, but the details of who the baby were never hit the press? The projects are so abandoned that Burke is literally the only resident left? This is an in-film surprise that doesn’t exactly work as an out-of-film surprise, and it’s frustrating too because with Anthony’s bee sting and his physical transformation, Candyman lays out one narrative track: that this was inevitable. That Candyman’s kidnapping of him predetermined his fate, and Anthony was always going to come back home, and he was always going to get stung by that bee, and he was always going to become Candyman. That was his destiny, and you can’t change destiny.

That would have been great! That would have synced up with elements of the first film, which suggest that Helen looks exactly like, and may even be a reincarnation of, the white lover of the Black artist Daniel Robitaille (Todd), who became the first Candyman. She too was pulled to Cabrini-Green, and she too couldn’t seem to control the hold the place had over her, and she too became part of the Candyman legend. Fine! Cool!

But Candyman doesn’t stick to that reasoning, or at least, doesn’t rely on it completely. And this is where I become confused by Burke’s place in this story. Because in the film’s final sequence, once Anthony has learned that he was the kidnapped baby, and once Burke abducts Brianna from his laundromat, he brings the lovers together into that old abandoned church. We know that Burke had his own interaction with a second incarnation of Candyman, Sherman Fields (Michael Hargrove), who in 1977 was murdered by white cops after scaring Burke and after being framed for putting razor blades in candy. (A little too literal to have another hook-handed man be the Candyman? Arguable.) And we also know that Burke saw the violence of Sherman Fields/Candyman after his sister and her friends said Candyman’s name, and Sherman appeared to kill them. So Burke has been through some shit. Does that make Burke … a magical entity powerful enough to summon Candyman, though, in such a way that he can take control of the legend? I don’t think so! And yet that is exactly what the closing act of this film posits.

In the church, with Brianna watching and Anthony in some kind of daze, Burke explains that it was his plan to bring Candyman back all along. Cabrini-Green has been ignored and abandoned (“rotted from the inside out,” Burke says) and so Burke plans to repurpose Candyman: “We need Candyman … to take back what’s rightfully his: his legend. When it’s all done, they’ll tell his story. Candyman will live forever.” Then he saws off Anthony’s arm with a bone saw (gross), plunges a hook into his arm (double gross), and enacts his plan of having Candyman killed by white cops (very fucked up). Brianna watches this ritual but manages to flee and kill Burke, the cops kill Anthony in front of her, and then when Brianna is arrested and threatened by the cops, she repeats Candyman’s name and brings him back—to kill the cops and not her.

… Why, though? This framing obviously aligns police brutality and the “say his name” component of Black Lives Matter and social justice movements with the five-times-in-the-mirror dare of Candyman as a legend. But overall, it doesn’t make any sense that Burke would have the power to do this! That’s not how any of this works! Candyman already exists, because Anthony is imagining Sherman everywhere! I don’t know why he is imagining the Sherman version of Candyman, not the Daniel version of Candyman, because it was the Daniel version of Candyman who kidnapped him, but that is what the film gives us! He keeps seeing Sherman in the mirror, which doesn’t sync up, because Sherman wasn’t even the original guy! I do not understand! And people already tell Candyman’s story! That is why there is a Candyman legend to begin with! We don’t need Anthony-as-Candyman transforming into Daniel-as-Candyman and imploring Brianna to “tell everyone” the legend! Everyone already knows! And how are Burke or Brianna able to make Anthony-as-Candyman act on their behalf rather than act on his own behalf? There’s no explanation for any of this! Again: It doesn’t make any sense, especially when Anthony has already come back to Cabrini-Green. Burke says that his actions and Anthony’s return to his home are actions “in perfect symmetry,” but they seem to me like a script unable to make up its mind.

Candyman has always killed indiscriminately, including people within Cabrini-Green, which has complicated this legend and avoided a didactic understanding of how race and class intersect upon the nature of good and evil. But this Candyman not only flattens that complexity, but also overly complicates its characters’ motivations and movements. Anthony could have been the prodigal son come home. Or Anthony could have been an innocent transformed by Burke’s machinations. He didn’t need to be both, and his muddled characterization reflects the larger confusion at play in Candyman.