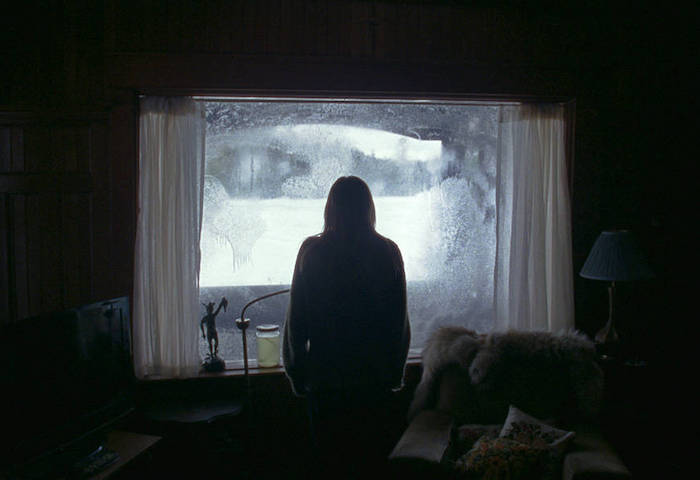 Spoiler Review: Horrifically Bleak but Hardly Horrifying ‘The Lodge’ Not Worth the Trip

WARNING: this review contains spoilers. If you do not want to be spoiled, proceed no further.

If you’re a horror fan and you’ve seen promotions for The Lodge, you might be looking forward to the second feature film from Veronika Franz and Severin Fiala, the duo behind Goodnight Mommy. On the surface, it does present a pretty promising picture, and to be fair, it does have redeeming qualities as far as aesthetics are concerned. Cinematographer Thimios Bakatakis is good at his job; and the first fifteen minutes or so are remarkably promising as his crisp, geometric framing builds a compellingly frigid atmosphere. Unfortunately, once the action moves to the eponymous lodge, everything stagnates—the action, the aesthetics, my ability to care. There’s a point in The Lodge where a character makes a desperate journey out into the snowy wilderness only to turn around empty-handed after several wasted hours, which aptly summarizes the experience of watching this film: a cold, miserable, and utterly pointless trudge through a vaguely dramatic landscape.

I would say that calling The Lodge a horror film is a bad joke only this film has no sense of humor whatsoever so that would be inappropriate. It’s a haunted house movie only the house isn’t haunted, everyone in it is just an asshole, and the whole experience is miserable that by the end it turns you, the viewer, into an asshole, too. A dog freezes to death and I had to force myself not to chuckle as the thought of “pupsicle” flashed through my entertainment-starved brain, for which I will never forgive myself.

The basic premise—mid-life crisis poster boy Richard (Richard Armitage) divorces the mother of his children, Laura (Alicia Silverstone), to marry his twenty-something girlfriend, Grace (Riley Keough). Laura promptly commits suicide after Richard breaks the news in a spectacularly callous fashion. Kids Aidan and Mia (Jaedan Martell and Lia McHugh) weren’t exactly interested in warming up to Grace before this all went down, so needless to say they’re not looking to make friends afterward. So, what is Richard’s genius plan for dealing with this hell of his own making? Bring Grace and the kids to the family lodge for some quality bonding time in the middle of snow-covered nowhere. Only he has work to do, so he’s just gonna leave them all there to work everything out amongst themselves. Nicely done, my dude. Way to make a mess and then bail for the cleanup. That “Worst Father of the Year” award will look great on your mantle.

One thing I failed to mention earlier: Grace grew up in a cult, and at age 12 became its sole surviving member after everyone else killed themselves in a mass suicide—which is actually the reason she became acquainted with Richard in the first place, as he was writing a book about cults. Knowing this, the angry, grieving children come up with a plan to make the unwanted vacation more bearable: they are going to gaslight the sh*t out of their loathed soon-to-be-stepmother.

The premise of The Lodge has potential, but the execution is utterly inexplicable. The film clearly intends to build “tension” around Jaeden and Lia’s gaslighting scheme—is Grace losing her grip on reality or are the kids manipulating her?, that sort of thing—only it shows the kids scheming and gathering the materials to pull off their master plan right out of the gate. It’s like if The Sixth Sense made it clear Bruce Willis was a ghost ten minutes in. There is no mystery to The Lodge, no real suspense, no real horror unless you are somehow unaware that children—and particularly, children in considerable emotional pain—are also capable of being unrepentant assholes, something that really shouldn’t come as a surprise to anyone who remembers childhood.

Sure, in many regards Grace is their victim in ways that subverts the traditional “kids vs. evil stepmother” narrative, but that alone is hardly intriguing enough to fuel an entire film and the subversion itself is hardly all that subversive. Keough does what she can with Grace’s character but the filmmaker’s efforts to keep her mysteriously distant take things too far and push her into the realm of blandly opaque. She might not be evil, but she’s made unempathetically monstrous by circumstance. Aidan and Mia are angry children in desperate need of an outlet for their grief, but through their own actions, they also render themselves monstrous. Richard’s just a dick from the word “go.” Everyone in this movie deserves the terrible fate they get but there’s little here to invest in on either an emotional or intellectual level so you don’t even care to see that comeuppance meted out.

The Lodge is fifteen minutes of interesting exposition followed by a stagnant hour and a half of waiting for everyone to just die already so that this slog of a movie can finally be over. If you’re someone who intentionally seeks out being miserable for some reason, I suppose I would recommend it, but I would recommend therapy more. The Lodge is not really a horror film so much as a dreary drama about how being an awful person has no age limit and screwing with emotionally unstable individuals can backfire. No sh*t.

← Entire Romance Writers of America Board Resigns Following Racism Row | 5 Shows After Dark: 'The Sinner' on USA, 'Man with a Van' on Investigation Discovery →