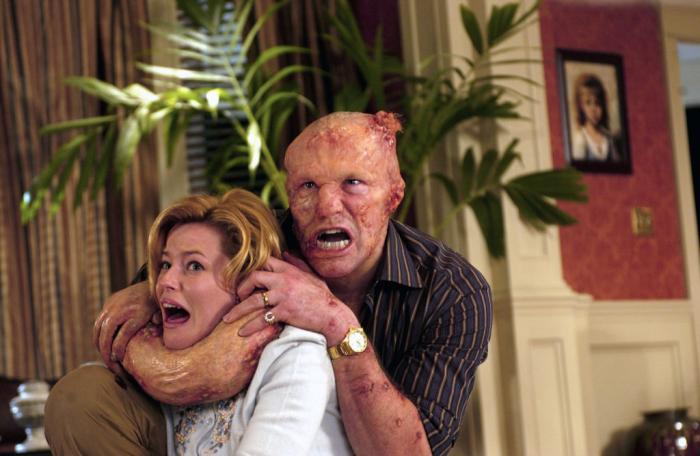 'Slither' Is One Hell of an Entertaining Ride

I could start off by getting all academic on you and talking about the conscious role of the metaphor of sexual violation in horror films, or I could get all polysyllabic on you and use words like “polysyllabic,” and while I can’t promise I won’t commit those sins later on in this review, dear reader, I will say at the start that Slither is one hell of an entertaining ride. It’s a comedy filled with acid-spitting zombies and a horror film full of laughs and one-liners, and the fact that the film manages to gleefully straddle the divide between such diverse genres is just one of the many things that makes it so much fun. Writer-director James Gunn uses humor to ground the outlandish situations in reality, to keep us giggling past the graveyard while telepathic slugs from outer space infect townsfolk and eat stray dogs (I’ll explain). Slither isn’t a great film by any means, but it’s certainly a good one.

Bill Pardy (Nathan Fillion) is the sheriff in the small Southern town of Wheelsy, but his duties are mainly relegated to dozing off in his squad car while waiting for speeders that never show. It’s while he’s nodding off in his car as the film opens that he, again, misses all the action: A meteor crashes in the woods nearby, and Bill’s none the wiser. Bill still carries a torch for Starla Grant (Elizabeth Banks), who teaches at the high school, but she’s married to Grant Grant (Michael Rooker), a frightening and nerdy ball of energy that really could only be played by Rooker. After Starla gives Grant the cold shoulder in bed one night, he goes out for a walk in the woods, which would be weird even under the most normal of circumstances, and in this case seals his fate. He’s out with a townie named Brenda when he comes across the meteor and something slimy on the ground and, genre rules being what they are, he foolishly pokes it with a stick, which is when it fires a small needle that burrows into Grant’s chest and, in a solid bit of CGI-rendered X-ray, winds its way through his body and wraps itself around the base of his brain. Grant stands up and appears to be fine, except for some blood on his ears and a hankering for raw meat. Back home the next morning, Starla makes up for the previous night by playing their song, Air Supply’s “Every Woman in the World,” and as Starla and Grant progress through foreplay on the couch, we see Grant, who we know to be possessed by a parasite, fall in love with Starla all over again. He may be the soulless killer of all life-forms on multiple worlds, but he’s got feelings, too. It’s a smart and almost touching turn from Gunn, but then, the director who gave us Tromeo and Juliet obviously has a soft side.

But the fun really starts when Grant slips off one night to visit Brenda, leaving Starla on her own at the local Deer Cheer festival (where, complete with line-dancing, the townies celebrate the start of hunting season). Grant’s been developing what looks like a wicked rash since his encounter with the alien and, once inside with Brenda, he unbuttons his shirt to reveal two squirming protuberances on his chest that reach out for the now understandably terrified Brenda. He pins her down and, in one of the film’s thinner metaphors, covers her mouth while the pair of pink, hook-tipped proboscises pierce her chest and start pumping something into her. The threat of violation is what makes horror films so scary, which is why the concept of some masked psycho stalking babysitters pales when compared with an alien face-hugger laying eggs in your stomach. There’s a world of difference between your body getting beaten and your body getting invaded; the latter takes on the fear of being pursued and couples it with a terrifying loss of control. The bad guy doesn’t kill you when he catches you; he takes you over.

So anyway, Grant turns into a giant squid thing and starts roaming the countryside for raw meat, and it’s up to Bill and his deputies to stop him. Mayor Jack MacReady (Gregg Henry) is on Bill’s case to fix the problem so the town doesn’t lose hunting business, so Jack tags along with the expedition to capture Grant that leads them to a barn that houses a grotesquely swollen Brenda, grown huge and ready to burst with thousands of slugs. It turns out that the slugs like to jump into people’s mouths and take over their bodies, turning them into meat-craving zombies that can spit acid to immobilize their prey. And what’s worse, they share a mental bond with Grant, each one seeing what the other sees in a kind of shared hive-mentality. Plus they eat household pets.

It’s all pretty bloody, and it’s extremely fun, the kind of pure entertainment that revels in being enjoyably lowbrow. Gunn’s script is packed with the kind of deadpan jokes we could see ourselves making in the same situations. Humor in horror films is the dip in the roller coaster, a moment’s break when our gut drops and we laugh and think we just might get out of this alive, before cresting another hill and getting terrified all over again. The first third of the film dallies a bit with exposition, as Grant’s growing skin condition becomes apparent to Starla, though when she asks him about the swelling bumps on his head, he says, “It’s just a bee sting.” It’s a funny enough line, but the film is filled with them, these quirky little moments that feel like the characters know perfectly well that they’re just acting out a B-grade 1980s horror flick. In fact, there’s no set date for the story, but it could easily be 20 years ago: Starla drinks Tab, Grant wears gold-wire-framed glasses with giant lenses, and when Jack sees the armory the deputies break out to chase Grant, he sarcastically asks if “the Russkies” are invading.

In all honesty, I expected the film to be gorier. Gunn uses a mix of CGI and prosthetics, usually dependent on the framing: Computer animation for long shots or ones with lots of creature movement, and in-camera effects for close-ups or static shots, like the uber-mutated Grant snarling at the cops or a solitary slug pinned down by a teenage girl wielding a curling iron. It’s satisfying to see the sucker bubble up and explode, but it’s almost like the “real” creatures and the “fake” ones exist in two different movies. Shaun of the Dead set the bar for horror comedies, and it also mixed effects media without specifically calling attention to them; for instance, when a character gets his head ripped off and insides pulled out, you’re not marveling at the animation, but disturbed that one of the good guys could bite it in such a messy way.

While Slither isn’t breaking any new ground with its effects, it’s forgivable since everyone on screen seems to be having such a good time. Banks, previously known as the barbecue-sauce-smeared hottie from Wet Hot American Summer and the sexual sociopath in The 40-Year-Old Virgin, has the perfect blend of beauty and humor for movies like this, and is believable as both the romantic lead and gun-wielding heroine. Character actors like Rooker and Henry are vastly underrated, and are always fun to watch, especially Henry, a marvelous go-to guy for sleazy authority figures. Fillion has the looks and dry humor to be the next Harrison Ford, and though his next project is White Noise 2, here’s hoping he breaks free from genre roles and gets his shot at mainstream drama and comedy. The man deserves it.

Gunn and his actors play the story for camp, but beneath the gentle mocking is an obvious love for this stuff. An avowed Stephen King fan and Troma associate, Gunn infuses Slither with the love of a true fanboy, creating a detailed backstory and inhabitable world just to watch giant worms try to eat it. Kind of like Eli Roth, only without the homophobia and with a sense of humor. I don’t know what’s next for Gunn, but it’s bound to be good.