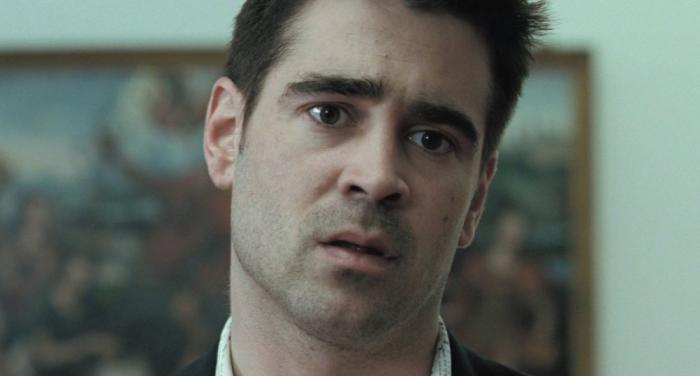 (spoilers for In Bruges abound)

And so begins In Bruges, Martin McDonagh’s 2008 feature-length debut. Widely considered one of the best films of the aughts, the plot is familiar to many, but just for a refresher: Hitmen Ken (Brendan Gleeson) and Ray (Colin Farrell) have been sent to Bruges, Belgium, on an unknown assignment by their vicious boss, Harry Waters (Ralph Fiennes). Ken is eager to take in the sights, but the moody Ray has little interest in the city, save for fetching film crew member/drug dealer Chloe (Clémence Poésy). It is eventually revealed that Ray, on his first hit ever, managed to turn the job tragic by accidentally killing a young boy while shooting his mark, a priest played in an uncredited role by Ciaran Hinds. The incident haunts Ray and it becomes apparent that beneath his offensive smart ass exterior, he’s barely holding it together. Meanwhile, much to Ken’s chagrin, the “assignment” is revealed to be a setup for Ken to kill Ray as retribution for the boy’s death. When Ken wavers, Harry decides to take matters into his own hands.

Bruges is repeatedly referred to as a “fairy tale” by Harry who, in his utter self-absorption, is convinced that Ray being exposed to the city makes for a sort of parting life gift. The gag is, of course, that Ray outright refuses to enjoy a moment of it. From refusing to climb the towering Belfry of Bruges (“Ray, you’re about the worst tourist in the whole world”) to behaving like an obstinate five-year-old in the Basilica of the Holy Blood, whining “do I have to?” when asked if he would like to join Ken to touch the revered vial said to contain the blood of Christ. The only thing Ray even mildly enjoys occurs during a visit to the Groeninge Museum, when he stands before a Hieronymus Bosch triptych, The Last Judgment.

The facts surrounding the artist, including the years that he was born and the number of paintings that can be attributed to him, is steeped in mystery. Considered the great surrealist of the middle ages, Hieronymus Bosch was born as Jeroen van Aken (though the man had more name variations than Daenerys Targaryen) between 1450 and 1455 to a family of painters in the Dutch city of ‘s-Hertogenbosch. That city name is not a typo, it’s a contraction of des Hertogen bosch, “the forest of the duke” or “the duke’s woods,” but I welcome any Dutch speakers to chime in otherwise. Another fun fact is the city has become known for holding a floating parade along the river each year in honor of the famous artist who loved the city enough to adopt it as his working name. Bosch saw success early on, enough to make a financially advantageous marriage, a merchant’s daughter named Aleid van der Mervenne, a move which garnered him additional financial resources to advance his art.

Bosch began his career with fairly typical religious depictions commissioned by wealthy donors. His work became increasingly more eccentric as his success grew, incorporating more and more dark, nightmarish imagery. And while the depiction of religious scenes has been a classical art staple since forever, Bosch resisted common conventions by incorporating secular imagery and altering the traditional religious triptych presentation by reserving center panels for the most hellish imagery, as opposed to the more common practice of reserving that space for the sacred.

Painted in approximately 1486 (the entire piece can be viewed and magnified here) in oil on wood, this is a prime example of a deeply religious work with secular imagery strewn throughout. On the left portion of the triptych, a towering fountain can be seen in the distance, with people cavorting about the scene, gathered in large fruits or riding on the backs of impossibly large birds. In the foreground, a boat outfitted with a pink tent contains an assortment of passengers, possibly intent on sailing onwards towards the tower and beyond. In the triptych’s center, Christ is suspended within a glowing orb, right hand up, left hand down, the stigmata visible on each. A pair of trumpeting angels are on either side, symbolic of the judgment that has come to those below, for while there seems to be a relative peace throughout the left, the bottom center is a hellscape that continues through the right panel. An endless variety of hellish punishments are being meted out across this desolate region, from people crushed beneath people-powered machinery, bodies strapped against harps played by demons or sliced against giant knives, and much more. 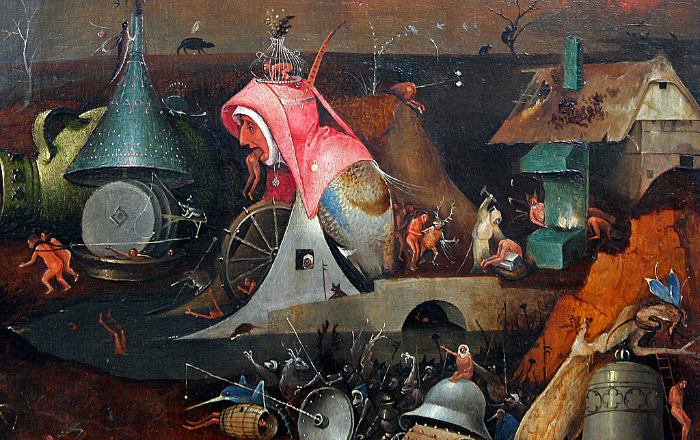 And it is this center panel that Ray quietly examines before whispering to Ken, “I quite like this one. All the rest are rubbish by sp*stics, but this one’s quite good. What’s it all about, then?” As Ken describes the religious concept of final judgment— operating as a sort of spiritual guide, which is appropriate, as Ken is the only one who truly believes in the possibility of Ray’s redemption, enough so that he ultimately dies for it—Ray begins to wonder aloud at the nature of judgment, both earthly and beyond:

“Do you believe in all that stuff, Ken?”
“About Tottenham?”
“The Last Judgment and the afterlife. Guilt and sins and…Hell, and all that?
“Um…Well…I don’t know, Ray. I don’t know what I believe. The things you’re taught as a child, they never really leave you, do they? So, like, I believe in trying to lead a good life. Like if there’s an old lady, carrying her shopping home, uh, I don’t try and help her carry her shopping, I don’t go that far, but I’ll certainly hold the door open for her and that, and let her go out before me.”
“Yeah. And anyway, if you tried to help her carry her shopping, she’d probably think you were just trying to nick her shopping.”
“Exactly.”

And although there’s a wry humor in the truthful admission that one’s good efforts often have self-imposed limitations, the stinging memory of Ray’s violent mishap is never far from his thoughts:

“But because of the choices I made and the course that I put into action, a little boy isn’t here anymore.”

And the consequences for this choice plays throughout, from Ray trying to end his own life (an attempt thwarted by Ken who, ironically enough, was only there to kill Ray himself), to the later showdown, in which Harry chases Ray through the plazas and cobblestone streets of Bruges.

McDonagh places the lens of Hieronymus Bosch and questions of judgment firmly in the third act. When Ray, recently reunited with Chloe, sees their acquaintance, actor Jimmy (a little person, a fact which plays heavily later), he proceeds to complain to the two about a scene he is on his way to film which will involve him playing a “psycho dwarf [who] turns out to just be a loveable little schoolboy” as “a Boschian nightmare.” Much like Bosch’s work, it’s difficult to know what this means, however, the visuals certainly make themselves apparent shortly thereafter.

When a now-shot Ray ambles on to this very same film set, costumed performers wander about, from mice and birds donning robes and hollow-eyed extras in medieval dress attire; the classic hybrid creatures and deliverers of torture found throughout Bosch’s work. McDonagh reminds us of the symmetry of life and personal choices, as Ray’s terrible mistake is reenacted after Harry fires at him on the film set. “The little boy,” Ray says, echoing the priest’s words, as he gestures towards a body, what Harry is only able to perceive as a now-headless boy (it is, in fact, Jimmy in the aforementioned schoolboy clothing). Harry (hastily) casts immediate judgment as he surveys the scene muttering “I see,” before taking his own life. The film comes to a close as Ray, now suffering multiple gunshot wounds, is being carried away by paramedics. As he stares heavenwards, the faces of these Boschian characters blend with the people he’s met during his time in Bruges. Knowing that his end is near, his final thoughts remain with the little boy who is no longer here because of him:

“There’s a Christmas tree in London with a bunch of presents under it that will never be opened.”

However, it is human nature to try to bargain before the final curtains close for those of us worried about what’s waiting on the other side. And despite Ray’s stated willingness to pay for his deed by death or imprisonment, what he fears most is living forever in the city he’s come to despise. And, much like the open-endedness of Ray’s fate, whether or not he deserves either the redemption or afterlife he seeks is ultimately left up to the audience.

Go here to see an utterly enchanting video of the Bosch floating parade in action (do it, it’s magical).

Kaleena Rivera is a librarian and is currently feeling very surly over In Bruges no longer being available on Netflix. You can find her on Twitter yelling about the importance of physical media here.

← Review: 'The Christmas Chronicles 2' Presents Kurt Russell, Goldie Hawn, and Julian Dennison, But The Thrill Is Gone | Transition Updates: Trump's Running in 2024, and Biden's Getting a Cat →