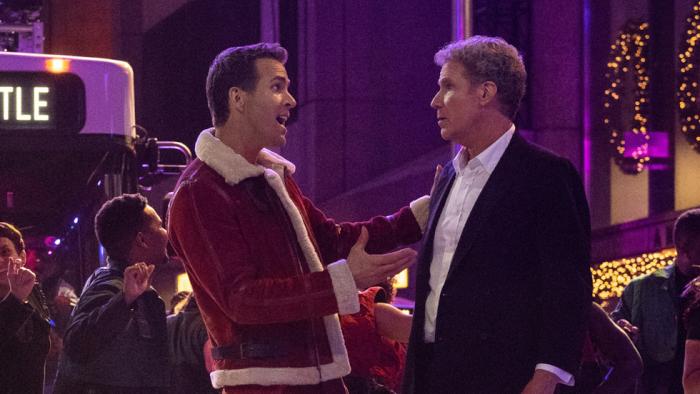 Ryan Reynolds and Will Ferrell's 'Spirited' Is a Crowd-Pleasing Blast

This site has been around since 2004, and in that time, I can name on one hand the number of truly decent live-action holiday-themed movies (I’m not talking about movies that take place during the holidays but movies that are about the holidays): Bad Santa and The Night Before, although neither could be classified as a family Christmas classic (both are Rated R). Since 2003’s Elf — the last great Christmas movie — we have collectively suffered through Christmas with the Kranks, The Santa Clause 3: The Escape Clause, Fred Claus, Four Christmases, Danny DeVito’s Deck the Halls, Ben Affleck’s Surviving Christmas, and The Family Stone. With the exception of Surviving Christmas — when the bottom dropped out of Ben Affleck’s career — these Christmas movies invariably do well because, for roughly six weeks every year, there is an audience who will watch any Christmas movie. Studios must know this because, for nearly 20 years, they have barely even tried to make a good one.

Spirited bucks that trend — clearly a lot of effort went into it — and the result is the best Christmas movie since Elf, and I’m not just saying that because I’m a recovering Ryan Reynolds fanboy. He’s good here, and suitably cast, but it’s Will Ferrell, the musical numbers, and a surprisingly clever — and at times, unpredictable — script that makes Spirited the holiday movie of the season.

Here, Will Ferrell plays The Ghost of Christmas Present, and he’s been doing it for so long that he is contemplating retirement, which in this case means returning to Earth as a human. He changes his mind, though, when he encounters the perfect subject for the next Christmas: Clint Briggs, a guy who is in … advertising (shudder). Clint brilliantly combines politics and marketing and helps companies make huge profits by creating culture wars to generate interest in products. Christmas Present believes that if he can make Clint a good person, he could turn him into a positive force for humanity. The catch? The powers that be say that Clint is “unredeemable,” and the only other “unredeemable” subject the Christmas triumvirate has ever saved was a man named Scrooge.

Christmas Present, however, insists on taking the gig, and soon finds out just how unredeemable Clint really is. He is so unredeemable that he sleeps with the Ghost of Christmas Past (played terrifically by Sunita Mani). Christmas Present has his work cut out for him, and in the process of trying to save Clint, Present also develops a big old crush on Clint’s assistant, Kimberly (Octavia Spencer), who has long felt morally conflicted working for Clint.

That’s the setup. I don’t want to say much more because I don’t want to spoil how it all unspools because there are a couple of enjoyable twists (and an uncomfortably dark moment or two), and the screenplay from writing partners John Morris and Sean Anders (the latter of whom directs) successfully subverts and builds upon the original Dickens tale. The musical numbers from Benj Pasek and Justin Paul (The Greatest Showman, La La Land) are hysterical and brilliantly choreographed, and one in particular — “Good Afternoon” — is destined to become a holiday classic.

It runs 15 minutes too long, but otherwise, it’s a blast. I loved it. My younger kids loved it. And my older kid — who hates everything — loved it, too. It’s a shame, really, that it won’t be released in theaters, because it’s the kind of crowd-pleasing musical that would do well in large audiences. Big family get-togethers over the holidays will have to suffice.


Spirited will be released on Apple TV+ on November 18th.