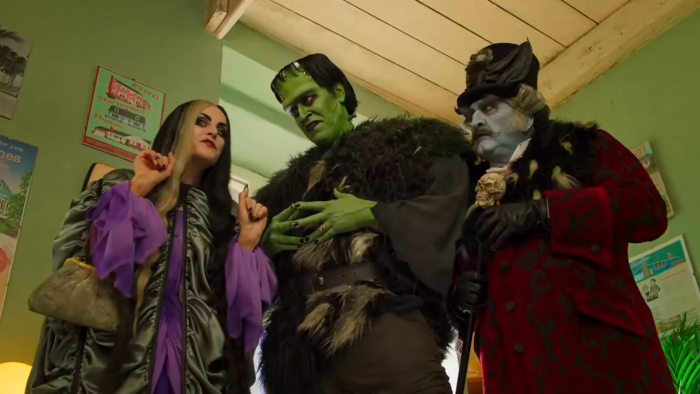 I will be the first to admit that I’m not the biggest fan of Rob Zombie’s films. I love horror movies, but I’ve never clicked with the subject matter Zombie’s movies tend to focus on. I think my breaking point was when his version of Michael Myers was awakened for a killing spree by two orderlies in an insane asylum attempting to rape a female patient. That said, I grew up in the older days of television, when you got little choice in what you wanted to watch. I saw shows that were well before my time, and one of them that I loved was The Munsters.

When I heard Rob Zombie would be making a Munsters movie, I had a similar reaction to most. I thought, “What dark, f***ed up version of America’s second-favorite spooky family is ole Rob going to give us?” It was a shocking development, to say the least. The plot thickened considerably when Zombie announced that he would be making a faithful, PG-rated movie. While I’ve never clicked with Zombie’s films, I can readily admit that he is a talented filmmaker. Suddenly the idea of him making a Munsters movie became exciting to me.

Today, a full-length trailer dropped for the film, and it is … something! To put it mildly, it is leaning in to the camp of its source material. Hard. That could be for better or for worse. Better, because to make a faithful adaptation of this particular property, camp is required. Worse, because I don’t know if Zombie’s version of camp is going to feel sincere at all. It doesn’t in the trailer.

The movie also doesn’t feel funny in the slightest. It is certainly trying to be. Even giving him the benefit of the doubt that the trailer is maybe just cut in a way that doesn’t help the jokes, I don’t think Zombie is that funny of a filmmaker. That’s fine. Comedy is hard. But that does make him an odd pick for this particular movie.

I’m still going to give this movie a chance. Mainly, because knowing that someone like Zombie wanted to make something like this is intriguing enough. I’ve loved listening to him in interviews. He seems like a nice enough guy, who loves working with his wife! Maybe this will be the movie of his I finally connect with?