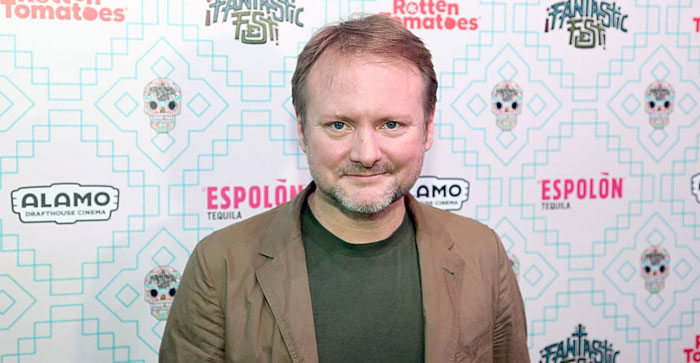 Some filmmakers might be thrown by the wild world of Fantastic Fest, where the barriers between fans, film critics, and filmmakers are demolished, so the whole lot mingle from morning until late into the night at an array of screenings, parties, and impromptu karaoke hangs. But writer/director Rian Johnson knows his way around, as he’s been bringing his original works to this funky fest since 2008’s The Brothers Bloom.

This year, his latest, the clever and crowd-pleasing whodunnit Knives Out, was chosen for the honor of Fantastic Fest’s Closing Night Film. Johnson touched down in Austin two days before this special presentation screening and could be found in the Alamo Drafthouse hub, mixing it up with attendees, and sporting the fest’s most coveted, most exclusive button. 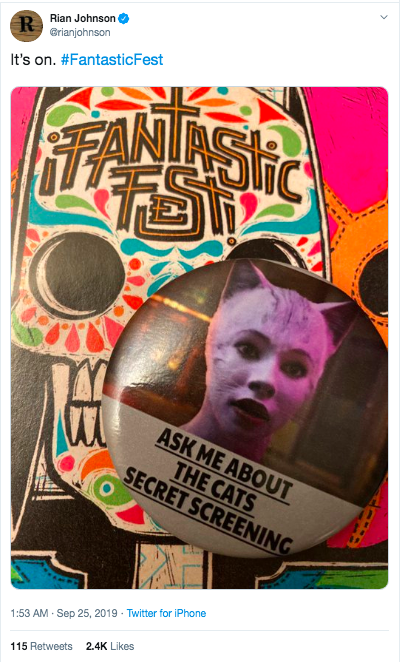 Sadly, the Cats secret screening was only a wishful joke. But it’s no joke that Johnson can’t wait to see this very daring adaptation of this polarizing Andrew Lloyd Webber musical.

In a haunted house-themed karaoke room, Pajiba sat down with Johnson to ask the important questions, like: Who is Best Chris? What he did he think of the Cats trailer? And what might a Rian Johnson musical look like?

—-
Pajiba: So, I know that you’ve talked about how you love musicals.

Pajiba: And Chris Evans has talked about how he wants to be in a musical.

Johnson: Jesus! Are you kidding? Come on!

Pajiba: One of the things the internet is obsessed with is “Get Chris Evans in a musical.” Specifically, they are talking about a remake of Little Shop of Horrors with him as the dentist.

Johnson: It’s full circle! Because the great Frank Oz, who directed Little Shop, which I think is one of the all-time great movie musicals, he very graciously did a cameo in Knives Out. So, it all comes full circle. So wait—Chris Evans as Seymour?

Pajiba: No, no, no. He wants to play the dentist.

Pajiba: Oh, a CG Audrey II would be so upsetting.

Johnson: Also, it was fun talking to Frank about that. Because when it was the massive puppet, they shot it at, like, six frames a second with the music slowed down. So, Rick Moranis in the foreground is having to move in slow motion while the massive thing could move really fast. (Waves arms for emphasis.) It’s just cool shit.

Pajiba: I’m such a nerd for that movie and I’d never heard that!

Johnson: I love that. Well, you’ll see it next time. Keep an eye on the big version of it.

Pajiba: So if you were to do a musical, would you try to do an original because that tends to be what you do (see: Brick, The Brothers Bloom, and Looper)?

Johnson: Yeah, I would want to do an original. My composer Nathan Johnson, my cousin and I, we’ve been making movies together since we were 10. And we talk about it all the time actually. It’s something that we’re actively chewing on. I mean, I love the form so much. It’s just a matter of figuring out what it would be, and how to approach it. You know what’s another one of my favorites? This might be my stealth favorite movie musical: Jesus Christ Superstar.

Johnson: It’s f*cking great. It’s alive. This is the main thing: it looks the way it sounds. It’s so of its time, but it’s so vibrant and alive.

Johnson: It’s so dated it goes beyond dated. It feels like a ’70s groove, but it just jumps off the screen. I love that movie so much.

Pajiba: So speaking of musicals and speaking of Fantastic Fest, what did you think of the Cats trailer?

Johnson: Oh my God. So, I’m a kind of an Andrew Lloyd Webber devotee. I love it. And Cats I have a history with because of my first trip to New York.

I had written a play in high school. And I was a finalist in, like, the Young Playwrights Project. They brought me out to New York. And so I literally was this wide-eyed kid. And I was in the office with all these young theater people and they were like, ‘Oh, you should go see this tonight. You should go see that tonight.’ And I’m sure it was, like, the new Christopher Durang play. It was probably, like, you know, Joe Mantegna in Glengarry Glen Ross or something outrageous. And I walked out and I looked around, I was like, ”I want to go see Cats!”

And so I went to see, like, a little late run Cats. It was just me and, like, half-a-house of nothing but out-of-town tourists. And the cats were visibly bored. I loved it. I loved it so much. So I can’t wait, man. I’m going to be there opening day—after I see The Rise of Skywalker. I will go across the hall—I’d pay for another ticket—and go across the hall and see Cats. I can’t wait.

—
We’ll have more from our Rian Johnson interview and Knives Out closer to the film’s release on November 27.