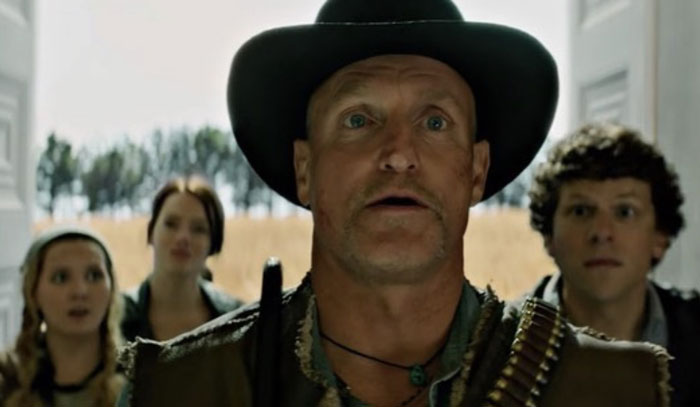 It’s been ten years since Zombieland proved a surprise hit, and a lot has changed for its behind-the-scenes team since then. Director Ruben Fleischer followed up the critically heralded zombie comedy with a string of critically panned offerings like the grimly unfunny 30 Minutes Or Less, the woefully dull Gangster Squad, and the comically terrible Venom. Screenwriter duo Rhett Reese and Paul Wernick scored success with Deadpool and Deadpool 2. Nebbish leading man Jesse Eisenberg and his kick-ass co-star Emma Stone went on to score their first Academy Award nominations, the latter chalking up three between Birdman, La La Land and The Favourite, and winning for the second. Woody Harrelson won fresh acclaim for True Detective and his second and third Oscar nods for The Messenger and Three Billboards Outside Ebbing, Missouri. Meanwhile, Abigail Breslin starred in a bunch of horror movies you probably never heard of and popped up on Scream Queens. Now—regardless of these highs and lows—they are all reunited for Zombieland: Double Tap, a sequel that suggests it’s better to let sleeper hits lie.

Zombieland: Double Tap picks up years after Columbus (Eisenberg), Tallahassee (Harrelson), Wichita (Stone), and Little Rock (Breslin) made a motley family in post-apocalyptic America. After roaming the wilds of zombie-infested plains and highways, they decided to make a home in the White House, and the first act has fun with the kind of shenanigans we’ve seen on the post-apocalyptic sitcom Last Man on Earth. If a band of bumbling goofballs had access to all the treasures the world had to offer, they might well treat historic paintings as wrapping paper and museums as shopping malls perfect for retail therapy. But amid this silliness, there’s also an attempt at creating domesticity. Nice guy Columbus springs a marriage proposal on a reluctant Wichita, and cowboy Tallahasse applies his overbearing brand of love to parenting Little Rock, who is now 18 and restless for a life to call her own. This sparks a split that pulls the whole gang out of the safety of their monumental home and back into the fray of flesh-craving undead fiends.

The script by Reese, Wernick, and Dave Callaham (The Expendables) ushers Zombieland fans back in with familiarities. Eisenberg’s quirky voiceover re-introduces us to this dangerous terrain, playing over a montage full of gore and goofiness as random humans flee three classifications of zombies. Then, there’s the exposition about why this chosen family chose the White House to make their forever home, complete with a slow-motion rampage sequence where the core foursome relish blowing zombie brains to bloody bits. There’ll also be the recurring mention of Columbus’s rules and ham-fisted efforts to work in new lingo like ZKOTY - Zombie Kill of The Year. But familiarity begins to breed contempt as the once-edgy comedy of Zombieland now feels painfully stale if not grossly problematic.

The Alpha Male/Beta Male dynamic of Tallahassee and Columbus that was once maybe not fresh but fun feels festered and phoned in. Eisenberg is on hokey cruise control while Harrison cavorts into cartoonish machismo. Making things more cringe-worthy is that both their plotlines revolve around controlling the women they love. For Tallahassee, that means getting Little Rock away from her new boyfriend, by force if necessary. For Columbus, it means coaxing Wichita into marriage, even by playing up his connection to a newly found survivor to inspire jealousy.

Deutch brings a much-needed life to Zombieland: Double Tap. Where all of its heroes have soured into a sarcastic and smug clique, her chipper and unlikely survivor is endlessly exuberant, which brings a sharp and refreshing contrast. While the sisters wear dark colors and scowls, Madison wears vibrant pinks, mini-skirts, and UGGs. Having spent her years on her own hidden away in a mall, her inexperience with the wider dangers of Zombieland gives Columbus fresh cause to preach his rules and allows for solid slapstick as she makes some hilarious and horrific missteps. But there’s a ferociously misogynistic thread to the Madison stuff because she’s roundly regarded by every other character as a bimbo. (Another tiresome archetype!) She’s blonde, bubbly, unapologetically sexual, and not-so-bright, offering up malapropisms like “acropolis” instead of “apocalypse.” By introducing Rosario Dawson as another badass broad who favors pants, dark colors, and a snarl, the film suggests being girly is for loathsome morons, while blithely ignoring that it’s pretty damn incredible that Madison survived alone for all these years and on her own terms! Still, the film treats her as little more than an easy punchline or a prop to make Wichita sulk or side-eye.

Far from the subversive fun of Deadpool, Zombieland: Double Tap dives back into the comedy tropes that played better a decade ago. The jokes feel lazy, like a segment where Luke Wilson and Thomas Middleditch pop in to play doppelgangers of Harrison and Eisenberg’s odd couple. They’re the same but ever so slightly different! Then, there are set-ups that offer no payoff, like the introduction of “Ninja” zombies who are limber, silent, and therefore presumably deadlier than their groaning bumbling brethren. Yet our heroes will never come across one. Or there’s the awkward oversight that Tallahassee spits with fury when he finds out his Little Rock has hooked up with “a musician!” Then he spends a hefty chunk of act two geeking out over Elvis, “the king of kings.”

In the end, Zombieland: Double Tap feels ill-conceived and crudely executed. It doesn’t give its cast anything very interesting to do. Its plot is meandering, snarled with set pieces that run out of steam before they have the decency to end and studded with callbacks that are more sloppy than satisfying. Still, props to Deutch, its clear MVP. She is a breath of fresh air in a film that reeks of self-satisfaction and half-assedness. She almost makes this mess worth watching.

← Meghan McCain Doesn't Want Any Democratic Candidate Beating Trump, Not Even Biden | 'Treadstone' Review: What the Hell Is Going On In This 'Bourne' Television Spin-Off? →