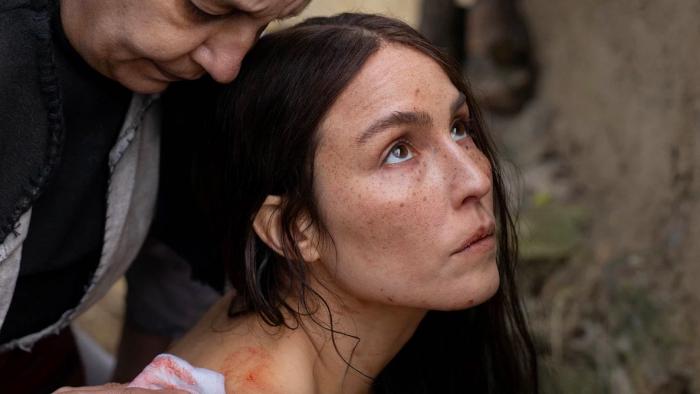 Sundance Review: 'You Won't Be Alone' Is A Fine Folk-Horror 'Orlando' Made For Poetry Majors And Gore-Hounds Alike

What it means to be human as glimpsed from those who are not that has been an intriguing thread running through several films that have premiered at Sundance this year. From Jim Archer’s lo-fi British robot comedy Brian and Charles, to Kogonada’s After Yang which digs through the sad and lovely memories of an A.I., to Riley Stearns’ Dual which focuses on the attack of a personality-imprinted clone, humanity’s been dissected and chewed on even when there weren’t handsome cannibals who look like Sebastian Stan on the screen. And then there’s the Australian-Macedonian filmmaker Goran Stolevski’s poetical feature-film debut You Won’t Be Alone, which comes at the theme from a Folk Horror angle and feels like what would happen if Terrence Malick remade The Witch. Which is thankfully as intriguing in execution as it is in sales pitch.

The film, set in 19th century Macedonia, actually starts off quite similarly to Robert Eggers’ 2015 “Elevated Horror” (yes I hate that term too) classic, in that there is a switch, and she’s come to eat your baby. The witch (Anamaria Marinca), who is here called “Old Maid Maria” by the local folk and has the broiled skin of Freddy Krueger, is immediately recognized by the mother of said baby when she finds the crone bent over the child prepared to feast—I guess you’d probably know who this was and what was happening too, if you lived in a rural village in 19th century Macedonia where everybody knew about a burned up witch named “Old Maria” who feeds on babies; it’s not a gigantic leap of the imagination made by Mom here. It seems the mother’s even prepared for this situation because she’s able to quickly strike a crafty deal—let her love and raise her child to young adult age, and then the witch can have her, no questions asked.

It strikes me as an odd bargain—isn’t the big benefit of child-rearing that you’ve got somebody down the road to take care of you in old age?—but I guess it’s not too far off from simply marrying off your child when the time comes. Me, I’d bargain with the witch that she takes the kid for the messy diaper-changing years and then bring her back when she can go milk some cows, but what do I know? Anyway the witch agrees to the arrangement with one stipulation, and immediately slices open the baby’s neck, stealing its voice—yes, très Little Mermaid. And off the witch goes, to return in sixteen or so years. Mom, thinking herself wily then, carries the infant over to the local sacred cave where the witch supposedly cannot enter, and we flash-forward through time as the baby, from its cave, is raised into a semi-feral weirdo (played with virtuoso feral weirdness by Sara Klimoska) called Nevena.

But of course when enough time has passed the witch Maria has no trouble sneaking in and getting her prize from this so-called sacred cave—somebody should try turning it off and turning it back on again, as I think the cave’s sacred is broken—and she snatches the girl off. And via some enthusiastic blood magic—this is a fairly gory film, be forewarned—Maria turns Nevena from regular ol’ semi-feral-weirdo into an official witch, with the long black fingernails and the thirst for more blood that comes with the gig. All the perks! And now we get the buddy comedy section of You Won’t Be Alone, where Nevena proves wildly incapable of meeting Maria’s lofty nightmare lifestyle expectations—I mean how many times to you have to smash a girl’s face into a cat’s mutilated corpse before she’ll learn, am I right Mothers?

I goof but this is all dealt with in mostly straight-faced and poetic solemnity—Maria has a bit of camp devilry behind her eyes, sure, but the whispered Malickian voiceover from Nevena, who becomes the film’s main character at this point, quietly intones lyricisms such as, “To woman you are glass, to man you are water” and, “Me the bees buzzing in my bowels.” And as such it’s actually rather lovely. Most especially in the film’s Orlando-esque second half as Nevena discovers her ability to shape-shift into other forms so she can experience life from their vantage. As “lovely’ as something that involves tearing out the original owner’s organs can be anyway, but the metaphysical-ness of it, which Stolevski leans hard into, strangely manages the feat.

And so Nevena becomes a middle-aged woman (in the shape of Noomi Rapace) for awhile, and then she becomes a hunky dude (played Carloto Cotta) for awhile after that, transferring her essence into their bodies and seeing what it means to be human—to be a woman, to be a man, to be a child and a mother too. Old Maid Maria follows her around from the sidelines, always knowing exactly who she is even under the skin of others, never too keen on letting her protege get too comfortable anywhere. The townspeople too seem to know this junior witch is moving silently among their midst, especially since she marks each new vessel with the tell-tale sign of speechlessness. In 19th century Macedonia superstition casts evil onto every Othered, and so the disabled are already met with fear and distrust—Navena sees the best and the worst of what humanity has to offer on her journey behind these people’s eyes; from the inside of their homes and fields and families.

And across this endless saga, this trial-and-error by a low-key string of murders committed on the same patch of countryside amid the same people year after year after year, Navena grows. At some brutal expense, sure, but who doesn’t leave a wake when they move through the world? Her experiences, a Folk Horror mirror version of our own, take on true poetry as she spins and dances and stumbles into happiness, sadness, all the things. You Won’t Be Alone definitely demands patience but it rewards it as well, with well-earned lessons forged in blood and bee-buzzing-bowels, ones scratched straight onto its characters’ skins, mortal and immortal alike. Maria, with her burn scars that she fiercely clings to, has been around long enough to know what of it—how even if you might slough skin easy, the marks of time and experience, no matter, those will always remain somewhere upon us.


← Stephen Colbert Reveals The Movies Besides 'Fight Club' That Were Altered By China | Mark Ruffalo: Foot Guy, Gentlemanly Subway Photographer, or Both? →