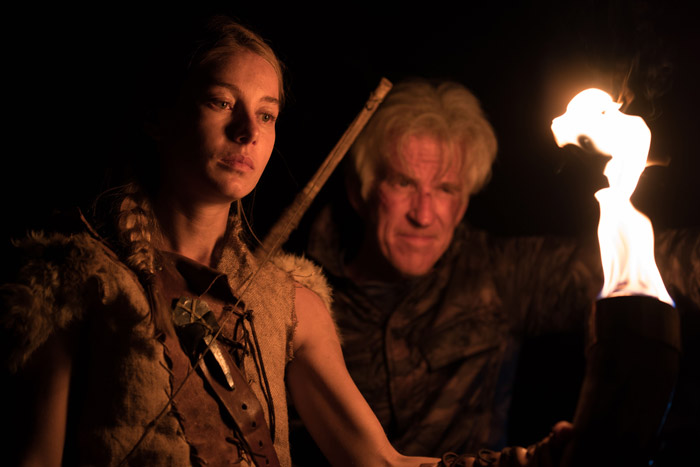 Review: ‘Wrong Turn’ Should Have Kept to the Main Trail

In the continuing trend of reboots and sequels of stale franchises comes 2021’s Wrong Turn, a new take on the hillbilly horror movie that most of us saw the first two-thirds of on cable. For the horror fans who stuck the sequels out, or the ones willing to give a new one a shot, this is a welcome chance for the franchise to grab our attention. It boasts bloody kills and terrifying traps that will convince anyone to stay inside. But as the runtime of this newest reboot treads on and it seems like Three Finger and the gang might not appear, you might ask “who is this movie for?” Then, as the film seems to accidentally indict every age group and political affiliation, you have to ask “Who is this directed at? Who is this movie talking to?”

In this Wrong Turn, Jen (Charlotte Vega), her boyfriend, Darius (Adain Bradley), and their friends are tripping around the country taking on their choice of hiking trails. The recent grads are looking to find themselves before starting their careers. When they arrive in Virginia to hike Appalachia, the crew is met with warnings from locals, suggesting the group of Gen Z archetypes don’t belong and need to be wary of veering off the main trail. Unable to help themselves, the group wanders off the beaten path and ends up prey to The Foundation, a primitive society that staked claim to the woods before the Civil War. Struggling to pinpoint their level of danger, the hikers find their safety at the whims of The Foundation. Their only hope might be Jen’s father, Scott (Matthew Modine), who sets out to rescue his missing daughter.

Where this movie gets more lost than its hikers is on its journey towards depth. The original Wrong Turn (2003), also penned by Alan B. McElroy, took on the story of city folk storming into “hick” territory. The villains were thinly veiled stand-ins for American rednecks that wanted to protect their way of life (as inbreeding cannibals). Adapting his own film’s lore, McElroy elevates the “hicks” to a backwoods cult wanting to protect their pre-Civil War way of life. In doing so, his story gets lost in allegory and metaphor and feels confused about which group is a stand-in for which real life counterpart. It is hard to know exactly what the movie is trying to say when white liberals team up with confederates to defeat colonizers who fancy themselves indigenous. What’s left in this otherwise well-crafted horror flick is a messy “all sides” story that doesn’t feel intentionally so.

When the hikers land in small-town America, they know they’re not invited in but want to kick the door open for themselves. Their clique made up of women, men of color, and a gay couple spoof Millennial and Gen-Z culture wearing “Black Owned” tee-shirts and shouting “Girl Power!” Aside from a brief quip about white feminism, the film doesn’t much engage with these identities beyond using them to signal “you don’t belong here.” When approached at the local bar by the confederate flag nodding townspeople, the friends cower just slightly before defending themselves from the white Boomers throwing shotgun glares at them. Standing up for her friends, Jen insists they have “real jobs.” This sentiment of worth flows through the rest of the film as the characters’ real-world skills are tested by both the unforgiving woods and The Foundation. The film wants to engage with themes of job skills as a marker of worth, of younger generations pushing back at being labeled entitled, of nepotism and parental expectations, of white liberals having a narrow world view, of progress as a threat to traditional people, and of youth changing what it looks like to be American. It goes so far as to set up bait-and-switch scenarios where the audience is unsure who to root for; the hollow young protagonists, the helpful salt-of-the-earth locals, or the land respecting woodspeople, but it’s much less clever than it is confusing to decipher. It loses itself in the unresolved motifs which amounts to a story that would have been safer if it stayed on the main trail.

The main trail, as it were, in this “stand-your-ground” horror movie is a story about a primitive culture using hunting skills to thwart an invasion from outsiders. In that way, it’s incredibly effective and point-blank frightening. The kills are jarring, the gore and effects are well placed, and the baddies are menacing. In its simplest moments, it feels like fresher scenes shot in the tradition of its predecessor that work better than most of its sequels. There is a bit too much movie crammed into the already overlong runtime, but it uses color to effectively denote what feels like a trilogy. It begins as a fresh blue-toned story of hikers, morphing into a green-toned scary story of them being hunted, then into its eventual dark tale of a cult-like colony that is awash in browns and reds. In this last third, fire is used as a light source in a way that produces beautiful tableaus that weaponize blackened space to create tension over what’s unseen and focus on what is. Director Mike P. Nelson, working alongside frequent collaborator, cinematographer, Nick Junkersfeld, successfully put together a great-looking movie that punches well above its weight class.

Wrong Turn is an otherwise scary and beautiful take on a hillbilly horror that does so much right. If it hadn’t jammed in complicated story threads that it had no intention of engaging with, it might have been a quick favourite. But instead, it made a wrong turn (forgive me) and threw away the franchise’s opening credits gags in favor of an “all sides” culture lampoon without any (Saw-)Teeth.

← How Casey Affleck is Trying to Make a Quiet Comeback | 'Losing Alice' on Apple TV+ is a Sexy, Psychological Chore →