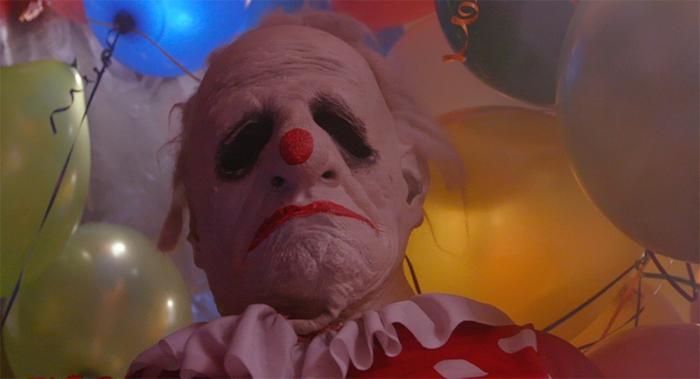 Fantastic Fest Review: 'Wrinkles The Clown' Seeks The Man Behind The Mask Of This Florida Bogeyman

Wrinkles is like something out of a nightmare. He’s a clown, far from the jovial festivities of a carnival or the welcoming lights of a circus, who spies through your window, trudges through your garden, or climbs out from under your bed. This is not a cheerful joker with a painted-on smile and a colorful wig. His face is completely obscured by a rubber mask that looks like Halloween’s Michael Myers has aged terribly. Sickly white skin holds broad unsmiling lips that are painted the same blood red as the circle on its bulbous nose. Hair protrudes in matted grey spikes from the back of a deeply receding hairline. Eyes, dark and vacant like two black holes, stare coldly, drawing you into the unsettling terror of it all. In a polka-dot suit and jarringly black rubber gloves, he lumbers around Naples, Florida, a real-life bogeyman used to scare children into behaving. This is the story of Wrinkles The Clown.

With this documentary, director Michael Beach Nichols sets out to understand the man behind the mask. But before all that, he begins with what the public knows about Wrinkles. The clown’s claim to fame are some scary videos of Wrinkles on the prowl. Then there’s his signature sticker emblazoned with his eyeless face and a phone number, daring the intrepid to call. Nichols offers montages of headlines, reaction videos, and memes to quickly summarize Wrinkles’ internet celebrity. Clips from The Late Late Show with James Corden and The Tonight Show with Jimmy Fallon show how he went from a local curiosity to a national conversation. Major outlets like GQ reached out for interviews, and news programs breathlessly covered the rise in creepy clown sightings across the US.

Nichols then digs into the allure of Wrinkles by interviewing a handful of kids who are fascinated by the infamous clown. They giddily share the wild stories that have sprawled online and out of control, like how Wrinkles kidnaps and kills children, and uses their blood to paint cryptic pictures. One kid excitedly explains the thrill of calling Wrinkles’ number, which leads to a voicemail box with a gruff voice and a solidly spooky message. Some kids speculate about Wrinkles’ motives and state of mind, while a towheaded Texas boy pulls out his own scary clown mask—along with a plastic knife—to show off to the camera crew what he would do if he was Wrinkles invading a child’s bedroom as they slept.

Giving cultural context, an expert on digital folklore ties Wrinkles to frightening figures like Slenderman and Charlie Charlie, delivering a brief lesson on these campfire tales for a tech-savvy generation. But it’s not just kids who are into Wrinkles. As unsettling as it is to watch a child mimick the clown’s most chilling video, Wrinkles The Clown offers much more disturbing content when it unfurls a flood of voicemails left for the infamous clown by fed-up parents.

You can hear snippets of these messages in the film’s trailer. One parent after another calls this number they saw on a sticker or online, and they ask a stranger in a clown mask to come scare their kids. They offer cash. And in the background of their calls, behind the voice of angry, weary grown-ups, you can hear small children positively screaming in terror. You hear kids cry that they’ll be good, and plead for their parents to hang up. You’ll hear from one of these parents.

A Georgia father who regularly calls Wrinkles to discipline his young daughter told Nichols’crew that he prefers this method, noting “spanking leaves a mark.” After he shrugs of the psychological damage this tactic might do, the crew interviews his daughter, who is so young she still speaks with a toddler’s lisp. Perched on a swingset, the young girl tells what she knows about Wrinkles: if she’s bad, he will come into her home and eat her alive.

Like Stephen King’s Pennywise, but real, and just a phone call away.

But what does Wrinkles have to say about all this? What does he make of his fame? How does he feel about his fans, who leave messages of adoration, and his haters, who leave threats? What does he think about parents using his voicemail box to terrorize their children into behaving?

Wrinkles The Clown is initially very sheepish to reveal the man behind the mask. Much time is spent with a grizzled, pot-bellied, and unidentified retiree, whom the film’s crew follows into a cramped trailer, down dirt roads, and too crowded beaches. However, the cameras are careful to keep his face out of frame. This old man’s voice grumbles raggedly as if it’s been dragged through a mile-long trail of ashtrays. Or, if you’d imagine Nick Nolte’s notorious mug shot would sound if it could sound off. This mystery man spits out brash justifications for Wrinkles, declaring, “When I was a kid you’d get the f*cking belt,” then adding children have it easy when their punishment is just “psychological warfare.” His answers are bold, brusque, yet increasingly underwhelming. They’re blustering rhetoric with little insight. It’s the kind of stuff that plays well in soundbites, but feels shallow in a film.

Then, finally in the third act, Wrinkles The Clown cracks the veneer of the real Wrinkles. Regrettably, this too proves more frustrating than satisfying, so much so that this final section fouled my opinion of just about all that came before. I was patient through mediocre montages, through 101 lessons on urban legends and bad clowns, through staged sequences that bring to life the sick fantasies the public has conjured for Wrinkles, and through meandering interviews with attention-hungry children and a reckless redneck. Admittedly, around a particularly ponderous section, I wondered if Nichols was short on content, and so was leaving in lesser scraps to reach a respectable (enough) 78-minute cut. Still, I was eager to see where Nichols was going with all this and what the mystery of Wrinkles might reveal. But, in the end, Wrinkles The Clown doesn’t deliver a eureka moment as much as sucker-punch. Or maybe a pie in the face. But make no mistake, Nichols and Wrinkles make sure the joke is on us, their audience.

Wrinkles The Clown made its World Premiere at Fantastic Fest.

← 'Law and Order SVU' is 20: Let's Talk Highlights (Mariska Hargitay) and Lowlights (Pablo Schreiber) | Why Can't I Watch 'Near Dark'? The Streaming Wars Are Boning Us →