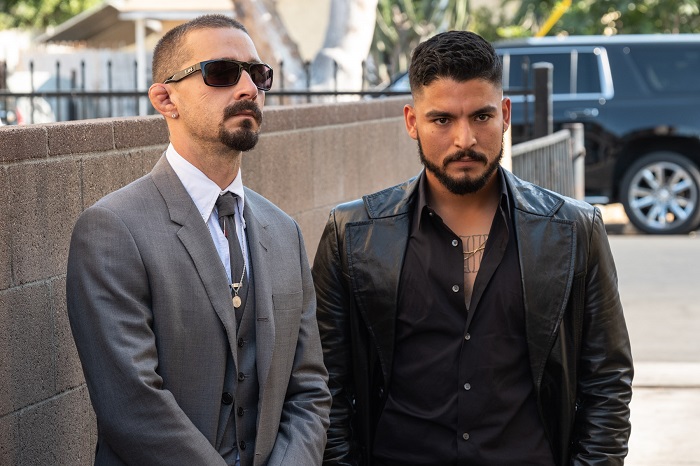 Review, with Spoilers: ‘The Tax Collector’ is the Exact Type of Embarrassingly Derivative Machismo You'd Expect from David Ayer

The Tax Collector is the kind of movie that makes me think David Ayer heard about the plot elements of Sicario 2: Day of the Soldado and Bad Boys for Life and tumbled off a cliff of existential despair upon realizing that other people in Hollywood were relying on the same awful stereotypes of Latin Americans that Ayer has built his entire career on. “But that’s MY whole thing!” Ayer complained, and then someone sympathized and gave him money, and Ayer sat down to write the most creatively bankrupt work of his career yet, and that’s how we got The Tax Collector. That’s the backstory I’ve imagined in my mind for this film, and you cannot dissuade me. Ayer has been recycling the same eye-rollingly obnoxious themes of masculinity and family and honor for so long that I’m amazed he’s not bored with himself. I definitely am. 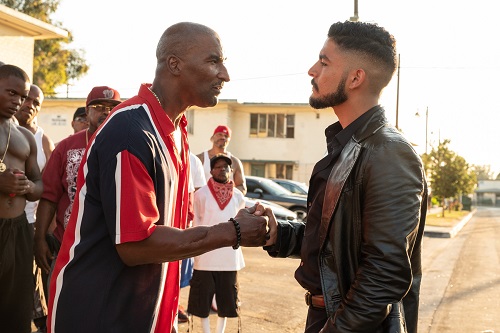 The Tax Collector, which Ayer wrote and directed, follows childhood friends turned co-enforcers David (Bobby Soto) and Creeper (Shia LaBeouf), who now work for the crime lord Wizard. Wizard is in prison, but his word still rules the neighborhood, and David and Creeper are responsible for collecting from Los Angeles gangs their “taxes” to Wizard. There is a whole system of which they are a part: Notes from Wizard in prison get smuggled out and hidden in chocolate bars a young girl sells on the street, David buys the chocolate to find the note and see how much people owe, his younger female cousin works at the store they use as their front, his uncle runs a garage that is also a front. Everything is in service of Wizard, and it is David and Creeper’s job to get their hands on those gigantic stacks of cash rubber-banded together and wrapped in newspaper or in Ziploc bags, tens of thousands of dollars at a time. And if someone is short their 30 percent, they have to face Creeper. (I know LaBeouf is supposed to be threatening, and most of the time, I adore him as an actor, but when he growled in a raggedy cholo accent “I might be” in response to someone’s fear that he’s “the Devil,” I just laughed and laughed.)

Flashbacks show us what Creeper does to these people—bodies skinned alive or dipped in acid or hacked apart into various limbs. Long story short, they end up murdered! Creeper is the wild card and David is the one with the familial connections to Wizard, and the two of them shoot the shit as they drive around from business to business: David mostly praising his devoted wife and his beautiful children and his faith in a Christian God, and Creeper boasting about the women he’s dating, who put carrots in their asses and send him pictures; extolling at length about his fish-heavy keto diet; and gently rebuffing David’s attempts at leading him to Jesus. The men are a mismatch, but they have history, and Creeper is ride or die for David in a way that possibly no one else in the organization is. (Ayer is leaning into his established brand of buddies trapped in a vehicle together and driving around; the same thing he had going in Training Day, The Fast and the Furious, Street Kings, Fury, Bright, and End of Watch). 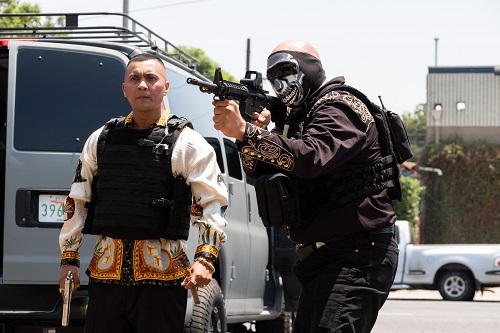 But one after another, things start going wrong. The count is $20,000 short, and David shows weakness by letting the man who shorted them go since he swiped the money to pay for his child’s cancer treatment. (Amazing to me how many filmmakers use the “these poor people don’t have health insurance” plot point; are those same writers and directors also publicly advocating for Medicare for All, or nah?) Rumors come out that Wizard is tangled up with the Mexican Cartel, and has maybe gotten in over his head. And suddenly there’s a new guy in the neighborhood, Conejo (Jose “Conejo” Martin), who has returned from exile in Mexico and offers Creeper and David better pay and more responsibility to leave Wizard. When they say no, Conejo starts a war—and no one is safe. 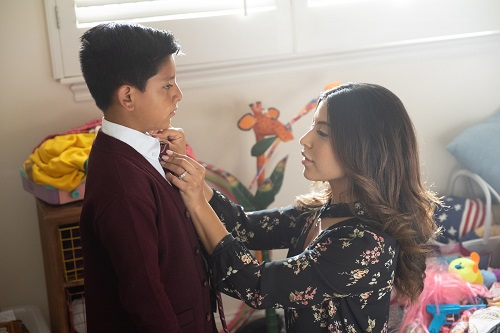 What happens next is what makes me think Ayer is positioning The Tax Collector specifically in response to Sicario 2 and Bad Boys for Life, since Conejo ends up being a follower of Santa Muerte, or Our Lady of the Holy Death (also a plot point in those other two films). Unlike David, who we know is good because he prays to Jesus before meals and tolerates his judgmental sister in law, we know Conejo is bad because he prays to Santa Muerta and does spooky rituals and murders a woman before his altar, letting her blood drip over his body and allegedly give him power. Over and over again, we’re told David is worth rooting for because he’s a family man—Creeper praises his marriage, and for some reason the entire Bloods gang decides to help Creeper fight against Conejo because they call David a “candle in the darkness.” And also over and over again, the women here are angels or whores. It’s funny that Ayer writes in a random insult toward the Kardashians but styles David’s wife Alexis, played by Cinthya Carmona and described as a “Mexican American princess,” exactly like Kim. She loves David, she takes good care of their children, and she’s brutally murdered so that David can find the gumption to take on Conejo. Meanwhile, Conejo’s female partner in crime, Gata (Cheyenne Rae Hernandez), is a psychopathic maniac who takes part in his death rituals and murders on command. We’re supposed to think of her as evil, but think of Creeper—who does the same sort of killing for David and Wizard—as worthy of our sympathy and our sadness. It’s the same old, same old Ayer thing, and what’s most offensive about it is how horrendously boring and utterly expected it all is. I wrote in my notes “What is good about David, exactly?” and there’s no real answer given. He’s another Ayer creation, which is to say a man we should respect for being good to his family, and forgive for all the crimes and violence he commits against others. I’m tired of this. How is Ayer himself not tired of this?

When the trailer for The Tax Collector dropped, so much of the initial criticism focused on Shia for taking the role of Creeper, who seems like every single stereotype of a gang banger combined into one figure. Creeper is all posturing and threats and tattoos; LaBeouf added to his ink in real life with a big chest piece inspired by the movie. But what’s most infuriating about Shia here is that he’s so charismatic, he almost pulls off the absurd dialogue (David, looking a picture of Creeper’s latest conquest: “Why’s she dressed like a fucking security guard?”; Creeper: “Because she’s a security guard, fool!”), and when he’s killed off with 30 minutes to go, the film noticeably slows down in his absence. Understandably, though, as soon as The Tax Collector trailer premiered, accusations of brownface flew around the Internet. Were those assuaged by Ayer clarifying on Twitter that Shia’s Creeper is a Jewish guy who just happened to grow up in South Central around the Mexican community? (This is never clarified in the movie, by the way).

Really important answer - Shia is playing a whiteboy who grew up in the hood. This is a Jewish dude playing a white character. Also the only white dude in the movie 💁‍♂‍ https://t.co/PS6foJwQXV

Or by Ayer sharing in an interview that he, in some ways, modeled Creeper after himself? From a story in the Los Angeles Times by Daniel Hernandez:

Case closed? Over the course of two interviews with The Times, during which the director sometimes switched between English and Spanish, Ayer described “The Tax Collector” as a family crime drama about love and loyalty. LaBeouf plays a supporting role to lead Bobby Soto as David, in a cast that is otherwise entirely Latino or Black.

“He’s a white guy playing a white guy. He’s not taking anyone’s work away,” said the director. Though it should be added that the film doesn’t expressly establish the ethnic identity of LaBeouf’s character.

As it turns out, the controversy he is facing is not unlike the questions that Ayer himself has faced over the course of his life for being “the only white boy” around people of color.

Though he holds back many of the details, Ayer said he’s always been around barrio culture. He moved to Los Angeles as a teenager, and fell into the life of the West Adams and South-Central sections of South L.A.

“I’m used to being the only white boy,” Ayer said. “Con la gente que cuenta [with the people that count], I’m good. … I’ve always kept this to myself. It’s my private life.”

I’m not sure that explanation makes anything better! It brings us, again, to the question of who gets to make films about specific communities of which they are not a part. Yes, Ayer spent formative time in South Central. Does that allow him to use a certain set of stereotypes over and over again in his filmography? Does his status as a white man provide him with a certain amount of privilege that would never make this sort of cultural tourism OK? And on the flip side of that, say that Creeper weren’t played by Shia LaBeouf, but by a Latinx or Afro Latinx actor. Would that make the character better? Would that make this film, which traffics in a menagerie of problematic portrayals outside of Creeper alone, better?

This is where the question of “representation” hits a sort of barrier, one that demonstrates the shortcoming of representation when divorced from identity politics. Ayer noted in interviews about The Tax Collector that LaBeouf is the film’s only white actor, and that’s true. But does the diversity of this cast inherently make The Tax Collector a film that pushes forward socio-political goals for the Latinx and Black and brown communities who are depicted within it? I don’t necessarily think yet another film from David Ayer that presents people of color as exclusively criminals or gangsters does that. Which isn’t to say that films should only portray people of color as inherently better than white people—that is tokenizing in its own way, and suggests that a flat “goodness” is enough for non-white characters. But Ayer’s particular approach, which relies so often on unwavering Christianity and heterosexual stability as the only means of demonstrating moral worth, is showing its narrative limitations in The Tax Collector. All the cross pendants and muscle cars and quinceañera gowns and cigars and machine guns and black magic and daddy issues don’t add up to much that is enlightening or entertaining in The Tax Collector, and that’s because Ayer is telling us a story he’s already told too many times before—and that might not be his to tell.

The Tax Collector has been in theaters, available on video on demand, and available for digital rental since August 7, 2020.

← 'British People of Reddit, What is the Most British Insult You Can Think Of?' | Watch Out, Stephenie Meyer Says She Has Ideas for Two More 'Twilight' Books →