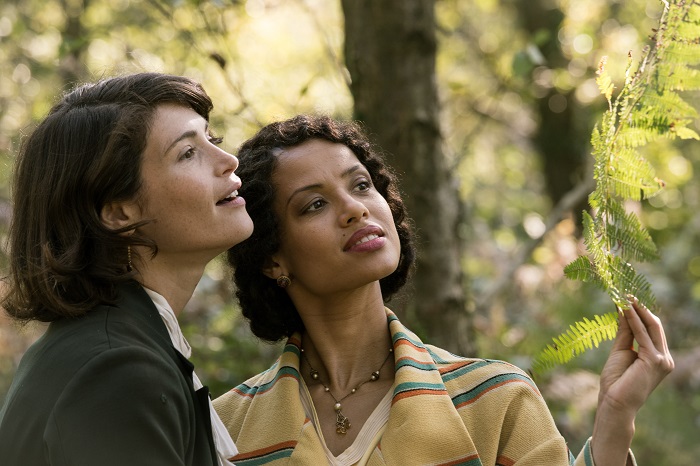 Review, with Spoilers: The Lesbian Love Story ‘Summerland’ Has Some Charm, But, Well, About That Twist …

Summerland might be the kind of escapist movie we all need right now, the cinematic equivalent of one of those paperbacks you bought for your college girlfriends’ book club but never read, so you bring it along with you to the beach. This is all back in the Before Times, when we had vacations, and I know we are all nostalgic for that. In our current reality, Summerland—despite some narrative shortcomings, including one we will discuss in terms of spoilers—has increased aesthetic appeal.

The film is set during World War II in Kent, on the seaside cliffs of southern England; the location is blustery but quaint. The cottage in which our writer protagonist lives is picturesque and has its own vegetable patch and a beautiful view of the water. Our protagonist herself is a writer, a little bohemian (long hair, long skirts, androgynous style) and a little kooky (obsessed with researching the myth of “Summerland,” or Pagan Heaven), and rumored to be a Nazi spy by her unfriendly neighbors. Flashbacks hint at a fraught romance with a beautiful woman, an affair that was equally passionate and unresolved, gauzy and gilded. It’s the kind of story that you could get lost in, and Summerland really tries to hook you. But this twist! I cannot get over this twist. I groaned out loud at the twist, and I must share it with you. 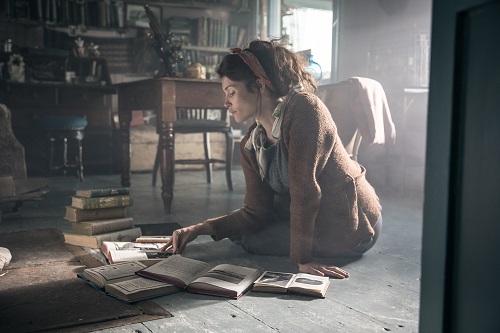 Summerland focuses on the reclusive writer Alice Lamb (Gemma Arterton), a 30something woman living by herself in Kent. It’s unclear whether she was rude to her neighbors first, or whether they were always cruel because she’s a woman daring to be unmarried and childless, but she’s clearly an outsider. Men see her approaching, whisper “Oh lord,” and get out of her way. Other women, especially those supporting the war effort, are aghast at her disinterest in helping out. And she has absolutely no patience for children, practically recoiling when school lets out and children flood the village’s streets. In a scene delightful for how deliciously Arterton plays a villain, she observes a young girl crying in a grocery store, unable to buy a bar of chocolate because her family isn’t allotted one that week. You think Alice, who asks for the candy, will gift it to the child—but instead, she flounces out of the store, treat in hand, biting into it with relish while the girl sobs. It’s very mean, and it is great.

Alice, who has written numerous books (“stories,” the male school principal dismisses them as, whereas Alice insists they are “academic theses”), is interested in everything about the world around her. She watches the waves, she sketches flowers and plants, a gigantic nautilus decorates her work space. And she is most interested in studying the science behind myths and folklore using physics and other scientific methods (in a classic lesbian move, Alice expresses passionate admiration for the historically misunderstood Morgan le Fay). In particular, Alice wonders, what did people see years ago that made them imagine castles in the sky? Heaven isn’t real, she’s convinced of it—so how did so many people have the same visions at once? “Stories have to come from somewhere,” Alice says, and she’s trying to find that somewhere. 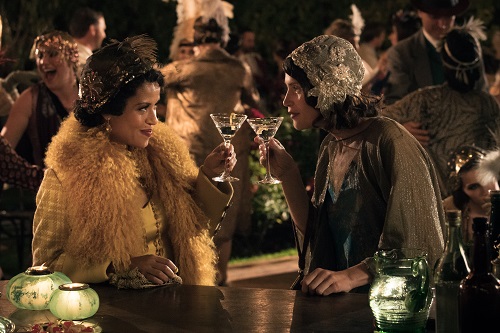 The routine of Alice’s days is full of work, chasing off children, driving along the countryside to track those illusive castle visions, and, every so often, remembering her life before all this—to her university days, when Alice wore jazzy sequined gowns, visited nightclubs, and was lighter, freer. In those days, Alice was in love with another beautiful young woman, Vera (Gugu Mbatha-Raw), who was studying modern languages and dreamt of writing novels, while Alice was studying history. Their sapphic affair is gentle and whimsical—clasped hands, caressed hair, swimming in lakes, whispering under the stars, and only one damn kiss, because this is a PG movie—but comes to an end when Vera insists on motherhood, and Alice wholly refuses. The reasoning here is scant: Vera believes that without a child, they’ll just be two spinsters living together; Alice is vehemently against having a child, but doesn’t say why. So Vera leaves, breaking Alice’s heart, and Alice is still mourning the death of her father, and feeling abandoned by the world, she moved to Kent, began writing, and hasn’t looked back.

This is the monotony that is interrupted when Frank (Lucas Bond), a young boy in too-big clothes and clutching a suitcase, arrives on Alice’s doorstep. The tween Frank is an evacuee from London who has mysteriously been assigned to live with the writer for a while. His father is a pilot, and his mother is busy in some connection to the war, and Frank somehow ends up here—with a woman who gives him raw meat when he asks for dinner, warns him of using the bathroom “Don’t touch my creams,” and tells him, “Do you believe in Heaven? Well, you shouldn’t.” 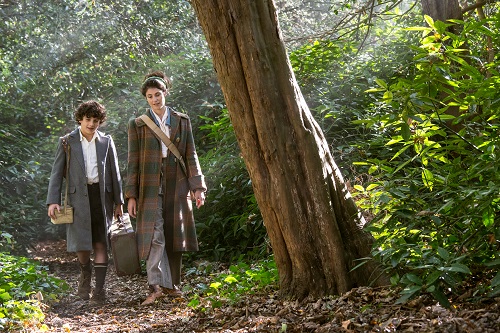 Still, Frank likes Alice—he does the chores she asks him to, and he accompanies her on the trips to find the Pagan Heaven called “Summerland,” and he guesses at her lesbianism, and it doesn’t bother him at all. Arterton’s face, and how it collapses into relieved tears, when he replies “No” to her “Would you think it was strange? If a woman loved another woman?” is one of the film’s best moments. The two have very nice chemistry! But also …

You can totally guess who Frank is, right?

You can totally tell?

BECAUSE YES. FRANK IS VERA’S SON. This is what I actually wrote in my notes: “If he is Vera’s son, I will scream!” Well, I didn’t scream, because I was watching this movie late at night and my boyfriend was asleep. BUT COME ON, Y’ALL. THE PREDICTABILITY OF THIS TWIST!

And then Frank’s father dies, and Frank’s family home is bombed, and everything is tragic. BUT THEN VERA ENDS UP BEING ALIVE AND COMING BACK. And the three of them all live together! Everyone is happy! It’s all joyous! More sapphic frolicking ensues, I assume!

That’s nice and everything. On the one hand, give me more LGBTQ love stories! Ones that end well! Please do not kill your gays! This community does not need more tragedies! But on the other hand, women not wanting kids is a totally normal thing! Alice didn’t need to be saved by Frank because not all women automatically or biologically want to be parents, and we shouldn’t force that upon them! This is a woman who earlier in the film says to a mother of four kids who complains about her brood, “You should have been more careful!” Just spending a couple of weeks with one cute kid would have undone her years-old convictions so thoroughly? I do not necessarily think so! And also, on Vera’s part, sending your child unannounced to live with a woman who told you years ago she didn’t want kids, told you so vehemently that you ended the relationship because of it, seems like an absurd gamble! I know it’s a war and everything, but come on! So no, I will not begrudge Summerland its happy ending, but that twist? That twist deserves my side eye!

Summerland is available for VOD and for rental on digital platforms beginning on Friday, July 31.