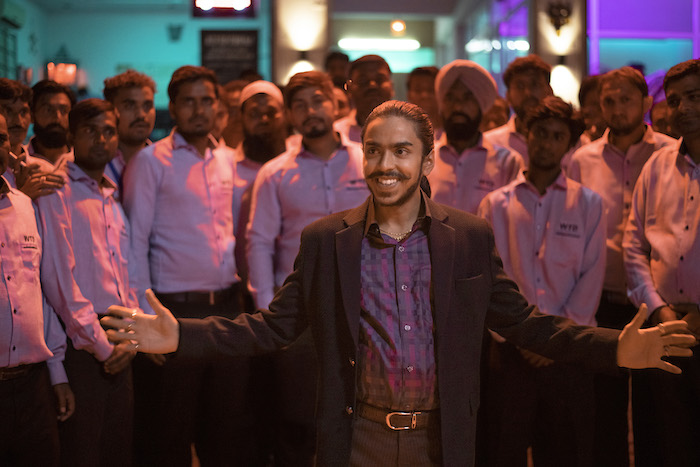 “I was trapped in the rooster coop, and don’t believe for a second there’s a million-rupee game show you can win to get out of it.” For everyone who rolled their eyes at the tacky saccharine sheen of Slumdog Millionaire, I come bearing good news: The White Tiger is now a film that exists. Adapted from Aravind Adiga’s Booker Prize-winning novel of the same name, the new film from Iranian-American writer-director Ramin Bahrani (Man Push Cart, 99 Homes) dismantles the twee fantasies most commonly seen in rags-to-riches tales. There are no squeaky-clean lucky breaks, no convenient windfalls via unexpected inheritance money or any other means, no climbing up the ladder through sheer hard work and gumption alone. Because, as White Tiger points out in its blithely scathing way, hard work, drive, and aptitude don’t count for diddly-squat if you’re not born with the means to build on this potential.

The man of the hour is Balram (a mesmerizing Adarsh Gourav). It’s 2010, and we know he’s made it against all odds—he’s got a taxi company of his own in Bangalore, a thriving hub of outsourced work. He sits down at his desk and types up an email to the Chinese premier Wen Jiabao, due to visit India. Balram seeks to convince the premier to take a meeting with him, and feels that sharing his life story will be the best way to charm the politician. Thus begins the film, and also what is presumably the longest email in the history of computing.

Much as in Parasite, the class commentary film par excellence of our age, young Balram is introduced as being the sort of poor that doesn’t even qualify the subservient end of the master/servant dynamic, barely scraping by with the rest of his extended family in a rural village wrung dry by its landlords, the Laxmangarhs. But when the Laxmangarhs’ US-educated, Americanized son Ashok (Rajkummar Rao) returns to India with his American-born wife Pinky (Priyanka Chopra Jonas), Balram sees a way in—Ashok will need a driver, and Balram will make himself the man for the job. While the rest of the family sneers at Balram, the Americanized Ashok is charmed by Balram’s initiative, and willing to look past his dingy clothes and bad teeth.

Ashok and Pinky are the sorts of people who would definitely identify themselves as progressive, and spend a lot of time telling off Ashok’s family for how they treat the servants, but the truth is far more complicated. White Tiger has both incredible strengths and significant shortcomings, and one aspect where it really shines—a strength prevalent through Bahrani’s entire filmography, in truth—is showing the limits of this progressivism, and how Ashok and Pinky, for all their lip service, aren’t so different after all. When presented with an opportunity to make a difficult choice that would involve putting their money where their mouth is, they repeatedly fail to do so, ultimately still taking full advantage of their power and privileges when it suits them.

While voice-over narration is often a target of easy criticism, the fact of the matter is that sometimes the technique actually works pretty great. White Tiger is one of those times. The best uses of first-person narration are those that use it as an opportunity to get inside the protagonist’s head in the kind of way usually reserved for novels, which is precisely what this film does. Adarsh Gourav gives a truly incredible performance as Balram, boiling rage buried beneath a placid mask he has few opportunities to remove. Balram’s personal journey is in many regards an internal war that defies any true resolution, a battle where the only options are the constant struggle of living in what he calls the “rooster coop” and making terrible choices in order to become that which he envies but also despises. It’s a big ask for an actor; Gourav does a remarkable job of conveying all these complexities through his performance. If there’s any justice in the world, we should be seeing plenty more from him soon.

While Priyanka Chopra Jonas brings a commendable depth to Pinky, some of her paradoxes feel less like an intentional commentary on the hypocrisies of the ruling class and more like mild symptoms of Written By A Man Syndrome, because we women, of course, are mysterious and mystical creatures. It’s more a case of carelessly leaning into annoying stereotypes—the one time a woman drives, for instance, it ends terribly—than anything more nefarious. In the grand scheme of things, these are minor qualms, but I am tired and crabby and buttons have been pushed. Can’t we try just a little harder? Is that too much to ask?

Anyway, for its many strengths, White Tiger also has its fair share of rough edges. Although maintaining consistently high energy, the film has definite pacing issues. On one hand, the middle features several tangents that feel like vestigial structures from either the novel or earlier drafts—excursions that feel like they served significant functions at one point, but in their final form mostly just occupy space. On the other hand, the third act oversteps from being fast-paced into the realm of flat-out rushed; the major confrontation that is technically the climax of the film speeds by in an underwhelmingly blurred fashion.

Overall a provocative, wonderfully energetic tale of class, corruption, and people being terrible in a deeply watchable way, White Tiger is well worth your time despite some unfortunate pacing issues. A much-needed revisionist take on the feel-good fantastical nonsense that is the standard rags-to-riches story, it’s the sort of bold, razor-sharp commentary that asks the tough questions while still being hugely entertaining—a winning combination.

The White Tiger is available on Netflix.

← Review: 'Everyone is Doing Great' is a 'One Tree Hill' Reunion Doing Its Best 'Party Down' Imitation | 5 Shows After Dark: 'Bridge and Tunnel' Premiere Epix, 'Euphoria' Special on HBO →