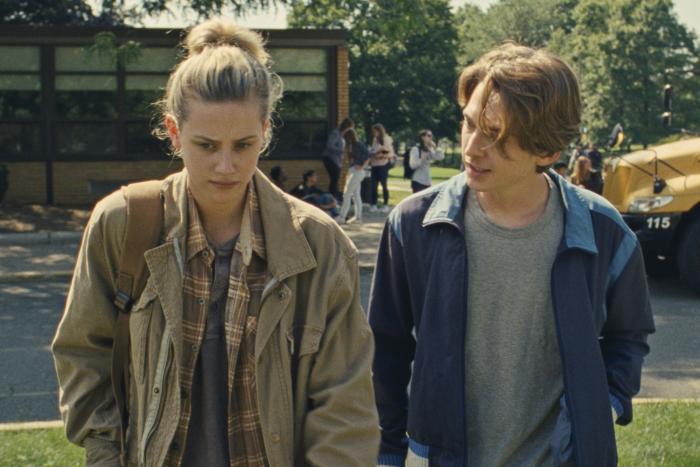 Review: 'Chemical Hearts' Is a Standard Teen Romantic Drama But The Book It's Based On Offered Much More

Henry Page (Austin Abrams from Euphoria) is a quiet high schooler with a strong romantic streak despite never having been in a relationship. His biggest ambition in life is to edit the school newspaper, an opportunity to show off his writing prowess. He lands the top job but ends up sharing it with Grace (Riverdale’s Lili Reinhart), a new girl who walks with a cane, avoids discussing her personal life, and seems haunted by something from her past. Of course, he soon falls for her, but his fantastical ideas of the power of love are tested by the cold grip of reality.

The moment the hero of Chemical Hearts falls dreamfully onto his bed while reading a collection of Pablo Neruda’s poems less than ten minutes into the movie’s running time, you know exactly what this movie is going to be and how it’s going to accomplish it. Shockingly, this isn’t a Netflix movie despite having all the trappings of a romantic drama that would fit right in among the platform’s growing roster of teen titles. The movie comes to us courtesy of AwesomenessTV, a ViacomCBS-owned studio that initially focused on YouTube content before moving into shows like PEN15 and a whole lot of movies starring Noah Centineo. The self-styled ‘studio of Gen-Z’ has very clear aims with movies like Chemical Hearts.

While the movie is adapted from a YA novel by Krystal Sutherland, its most obvious influence is the work of John Green. Best known for the wildly popular The Fault in Our Stars, Green’s novels are most often criticized for its utilizing of the Manic Pixie Dream Girl trope, and the assumption that showing self-awareness about one’s usage of a cliché is the same as subverting or deconstructing it. Chemical Hearts falls into this trap numerous times.

Really, there’s not much interesting to talk about with this film. It’s a solid but unspectacular teen romantic drama that takes itself very seriously yet skips over the abrasive edges of its passionate core. There are some clear-eyed moments and director Richard Tanne, who previously made Southside With You, injects the aesthetic with some solid Sundance indie favorite flair, but is that enough? What made it more intriguing for me was my experience of watching the film then contrasting it with Sutherland’s book, which is a better piece of work while still having some narrative and emotional kinks that the adaptation tries to iron out.

Chemical Hearts is a very somber affair, a story of grief and trauma that strips its central characters of the layers that would allow them to be more fully developed human beings. It’s as if the film is worried that the sincerity of its concept will be punctured if the heroine is allowed to be happy or make jokes about her injuries. This is a sharp contrast from the book which, while heavily reliant on the kind of precocious scamp jokes that seem ill-suited to real-life adolescent banter, allows its protagonists to live their lives in ways that aren’t exclusively defined by misery. Grace gets to be sardonic, witty, even silly. She and Henry share memes, they try way too hard to make one another laugh via text messages, and they get drunk at parties. While the book may have its issues in depicting a troubled young woman battling her demons, there was a refreshing warmth in Sutherland’s refusal to have Grace be someone whose only characteristic was ‘sad weird girl.’

The Manic Pixie Dream Girl lie is much more prominent in the novel than the movie, to the point where the characters even debate whether or not Grace fits the MPDG mold. The heart of the book is its intriguingly dense exploration of the ways that people, but especially young men, are blinded by their own desires and perceptions of those around them. To Henry, Grace’s grief is an inconvenience, a burden he is neither emotionally nor intellectually prepared to deal with. It’s even something he resents, because he’s still a 17-year-old kid who craves the fairy-tale neatness of love and not its prickly reality.

The movie lacks the deft touch and running time to dig into this topic further. It touches on it with vague platitudes and a few hackneyed metaphors (which, in fairness, are in the book) but thinks that Lili Reinhart’s cry-face is a satisfactory substitute for depth. It’s a shame because all the things that must have made this book so alluring to its producers aren’t present on the screen. Grace is sad and that’s it. Henry mopes and that’s it. His friends, who are such key supporting characters in the book, are relegated to bit-parts and stripped of their thematic importance. This last part is particularly sad because so much of the novel’s themes of love as an abstract versus its reality are given greater room to breathe through his friends. Murray, for instance, is a self-styled lothario whose obsession with his ex-girlfriend veers into unsettling territory, while Lola is an out gay woman who is sick of dealing with her male friends’ emotional baggage and inability to understand girls. Even Henry’s family, who turn out to be an unexpectedly tricky study of relationships, are shafted, except for his older sister, now poorly redefined as yet another mope, who gets to explain the meaning of the film’s title.

The big problem with Chemical Hearts, which is notable whether you’ve read the book or not, is that it doesn’t seem to take its audience seriously enough to allow them an opportunity to explore the emotional range of this material. It’s like they think we don’t understand how people experiencing anguish and distress can also occasionally be happy and make friends and want to see silly movies with cute boys without that undermining their pain. Instead, what the film leaves us with is a competently executed sad story that, while admirable, falls short of its own goals. For YA movie fans, it may offer a nice change of pace from the recent glut of cheerier rom coms, but the best of those titles capture the prickliness of adolescence far more effectively than Chemical Hearts.

Chemical Hearts is available on Amazon Prime from August 21.

← Steve Buscemi Narrates What is Essentially the Honest Trailers Version of the Biden Campaign | Are Trump's Efforts to Sabotage Mail-In Voting Backfiring Spectacularly? →