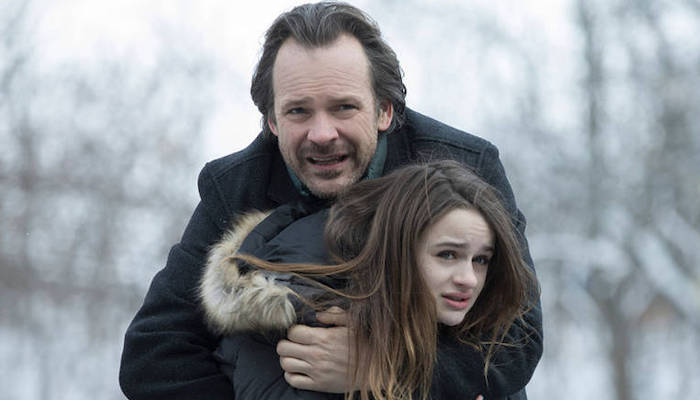 Review: 'Welcome To The Blumhouse: The Lie' Unravels A Parenting Nightmare

Somewhere between studio releases and direct to streaming indie darlings lies the four-film horror anthology, Welcome to the Blumhouse. Audiences are being gifted four features, dropped in successive pairs to stream alongside spooky October watchlists. Among them comes The Lie, a gut-wrenching tale of the committed parents willing to do anything to protect their daughter.

Kayla (Joey King) is your seemingly average pissed off teenager. Her divorced parents have eyes for people she doesn’t deem worthy and she feels like an inconvenience to their burgeoning social lives. Her father, Jay (Peter Sarsgaard), is on parenting duty, set to drive her to a dance retreat. En route, the two come across Kayla’s friend, Brittany (Devery Jacobs), waiting at a bus stop and Kayla insists on giving her a ride. After some uncomfortable flirting with Jay, Brittany insists he stop the car so she can relieve herself in the woods. As the girls skip out of view, Jay hears a scream and runs through the woods to find his daughter alone on a bridge over rushing water. “I pushed her.”

Jay rushes the panicked Kayla to her mother, Rebecca (Mireille Enos), who is too busy reprimanding Jay’s parenting style to initially hear his laments. After some short time agonizing over their dilemma, the parents decide it’s best to protect their daughter by telling a lie, no matter how badly Kayla seems to want to get caught.

The setup is simple enough: parents willing to do anything to protect their child, even if it means covering up murder. “You let her get away with anything,” Rebecca says, blaming Jay. The Lie wants to do everything but keep Rebecca and Jay’s decision simple. Rebecca struggles facing down Brittany’s father, takes it upon herself to make allegations to powerful law enforcement connections, and quivers like an autumn leaf while Kayla casually serves breakfast to the family. How far does one go to protect their flesh and blood? How far can one go?

What’s unfortunate about the twists and turns crammed into the hour and thirty-seven run time is that the film has no interest in exploring them. In a conversation with her father around the pool, Kayla exposes cuts on her arm and confesses that she feels pain because the boys at school pay more attention to Brittany. When the officers investigate Brittany’s father, a quip drenched in racial profiling is chucked at him by a wannabe commando with a badge. These quick hits could have made for a thicker story about women valuing themselves via male attention, about mental illness and its dance with psychosis, about the proposition of believing women sometimes being at odds with white women falsely accusing men of color. By grazing past these themes, not only does it not mine them for delicious text, but also it diminishes them by peppering them around an otherwise paint-by-numbers noir.

Veena Sud directed the film and wrote the script as an adaptation of the 2015 German film Wir Monster (We Monsters). Where Sud shines is in style. The film takes place during a brisk east coast winter (Toronto standing in for New York) and it exploits that to keep everything cold. It’s drenched in a layer of blue, and the family home is sharp, angular and looks like it was dressed for a catalog that might appeal to Patrick Bateman. The parents never look settled or comfortable, which makes it all the more creepy when Kayla lounges or laughs. Joey King (The Act, The Kissing Booth) is a stellar performer who sells her role as an unnerving teenager. She, unfortunately, doesn’t get a ton to do, but when she does, she excels. But it’s really not Kayla’s story, it’s Rebecca’s, and Enos does an excellent job nervously stumbling through managing her feelings about her duplicitous teen.

There is so much potential in the creepy story of parents covering up a murder at all costs, but The Lie leans far too heavily into craft workshop scriptwriting to feel genuine. An asthma puffer is used early in the film that might as well have “Chekov’s Gun” written on it in big bold letters, the whole plot relies on stakes raising dramatic irony, a teen exudes “I learned it from you, dad,” energy, and a dream sequence ends in a cheap jump scare. The transparent uses of these tropes leave the whole film feeling frustratingly clichéd.

Sud’s twisted tale of a family against the wall brims with potential. It could tackle themes of family dynamics, intersectionality, and the dangers of wealth and privilege. It throws some shallow bits of theme at the thriller, but they never stick. It’s a dart chucked directly at the Hitchcock target that never picks up any speed.

The Lie is now on Amazon Prime Video.