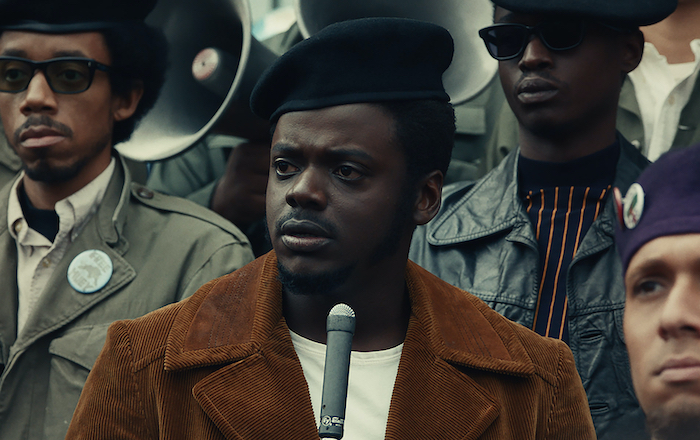 Review: Visually Stunning 'Judas and the Black Messiah' Will Educate or Exasperate You

The Black Panther Party might have been originally called the Black Panther Party for Self-Defense, but in truth, they spent a lot more time talking about education than guns. This is certainly not something I learned in school, but from my father. He wasn’t a full-fledged member but attended some BPP community education events back in the day. “They ran a free breakfast program for kids,” he told me. My textbook had definitely skipped that bit.

Judas and the Black Messiah is certainly the first time I have seen a film depict the Black Panther Party and their values in a way that echoes what my father taught me, not the brief dismissive comments I recall from textbooks. That really does matter, and it’s exciting to see. However, that does not make the film beyond reproach, and while the fundamental approach of Judas and the Black Messiah and the technical execution are both stellar, there are some other elements that get rather lost along the way.

The choice to center FBI mole Bill O’Neal (LaKeith Stanfield) in telling the story of Fred Hampton (Daniel Kaluuya) story is a smart one narratively speaking, building in a certain complexity that takes the film away from your standard cut-and-dry “great man” biopic. However, the film makes oddly little effort to capitalize on the potential of this approach, giving little insight or attention to his internal struggles or the incredible guilt he was left with.

We meet Bill impersonating an FBI agent to rob cars and promptly getting caught. When he’s brought in, he’s given a choice between jail and becoming an informant; he picks the latter. While Bill is obviously deeply conflicted about his duplicity, the script oddly fails to create many opportunities for empathy. The whole of his character is his duplicity; in terms of wants or motivations, the script doesn’t feel the need to give Bill more to work with besides the fear of jail time. In his scenes with Fred, he’s mostly a bystander, watching the action from the periphery. When we get a more extended dialogue it’s primarily with his FBI agent handler Roy Mitchell (Jesse Plemons, cornering the market in soft-spoken monsters with good table manners). In terms of furthering the story, these scenes exist to highlight the heinous attitude of the powers that be in ways that echo none-too-subtly to the present (i.e. “the Pathers and the Klan are one and the same,” a clear both-siderism shout-out), any light they shed on Bill as a person feels more like a lucky coincidence. The film smartly chooses a tragic villain of history as its viewpoint into Fred Hampton’s world, and then not only fails to really tap into the fascinating complexity there, but also doesn’t even really seem to try.

Director Shaka King shares writing credits with Will Berson (Scrubs) and the Lucas brothers, also known primarily as a comedy duo. Overall, the screenplay really is the weakest link here—it’s polished in a way that makes it clear these are capable writers, but the understanding of dramatic principles feels questionable. The true story of Fred Hampton’s life is so compelling that the experience on the whole still works, but the film often works in spite of the storytelling choices made instead of because of them. It’s the sort of situation where the surface has an impressively glossy sheen, but the moment you start poking around and pulling at seams it unravels disappointingly fast.

Overall, Judas and the Black Messiah is so preoccupied with Fred Hampton’s death that it somewhat neglects his life, glossing over the specifics of his character and his brilliance that undermines the tragedy of his loss and the depths of the evil that lead to his murder. For instance, the formation of the Rainbow Coalition, a movement that managed to get a racially diverse collection of leftist groups to work together—a truly brilliant strategy and incredible achievement—is allotted one measly montage that makes it easy to overlook just what a Big F*cking Deal that was. In not taking the time to explore Fred Hampton’s particular brilliance as an organizer, the film ironically undersells its own main argument. It hits on the foreshadowing so hard he gets a bit of a Joan of Arc-like prophetic martyr quality as if an early death was part of his master plan and not a horrifically effective way for the state to stamp out the particular threat he posed to the status quo.

While the film’s most radical quality is the way in which it unapologetically depicts law enforcement on every level as an oppressive force dedicated first and foremost to keeping power structures, not people, safe, its most egregiously Hollywoodized aspect is the way it tries to push “you can kill revolutionaries, but not a revolution” messaging in a way that feels rather disconnected from the actual history at hand. It’s true, the fight goes on, but murdering a movement’s leaders is a very effective way of cutting it off at the knees, which is precisely why it was done. The idea that the potential of the movement was not severely undermined by the murder of Fred Hampton is foolish; it’s not true to the history and it doesn’t help the drama of the story either.

At the end of the day, it can be incredibly difficult to critique the movie that is and not the movie that could be—and in all truth, while it’s an effort that’s worth consciously making when it comes to film reviews, it’s not entirely possible. Taste is ultimately too subjective a thing, and that’s what makes great moviemaking an art, not a science. Judas and the Black Messiah is a film that really highlights this challenge because while it’s superbly executed and effective filmmaking, it’s also very hard not to feel frustrated thinking about what it could have been. In truth, this film barely skims the surface of how remarkable Hampton was; everything he achieved and everything he wanted to but didn’t get enough time to even try.

But for all the questionable choices the script makes, the technical execution goes above and beyond; Shaka King’s visual storytelling prowess is undeniable, and his team also brings their A-game. Best known for his collaborations with Steve McQueen (Hunger, Shame, 12 Years a Slave), cinematographer Sean Bobbitt is a true master of visual storytelling and his streak continues here. The “show don’t tell” game is off the charts in this one, and many of the most effective character moments involve no dialogue, using clever cinematography and editing that allows the incredible performances on display to communicate multitudes without saying anything at all.

The cast assembled here is remarkable. Daniel Kaluuya has proven himself to be not just an actor with mesmerizing screen presence, but a remarkable intensity that adapts to any role, from romantic lead to terrifying villain to charismatic revolutionary. He’s one of those rare performers who has the presence of a leading man and the chameleon-like adaptability of a character actor at once. Dominique Fishback is also a real standout as Fred’s girlfriend Deborah Johnson, managing to add depth and nuance to what is otherwise an unfortunately run-of-the-mill biopic love interest role—i.e., she’s there to humanize Fred as the emotional backbone of the movie because this film does seem to operate under the outdated “feelings are women’s work” school of thought (the one other big “feelings” scene with Fred features a motherly older woman).

There is one shortcoming of the casting that really must be mentioned, though, and that is age. With the way the industry works and the role of star power in financing and development, it’s easy to understand why established players like Kaluuya and Stanfield were brought in, but in terms of telling Fred Hampton’s story, it really is a shame this story wasn’t told with younger actors. Bill was 17 when he was caught by the FBI and roped into becoming an informant and 20 when Fred Hampton died, while Fred himself was only 21. No matter how talented this cast may be, they definitely look like they’re in the ballpark of 30, not 20, and it definitely hits different.

Judas and the Black Messiah is somewhere between a baby step and a giant leap—shining a spotlight on a great American sin of the not-all-that-distant past in a way that’s been desperately lacking from the conversation, although it regularly stops short of major insights. For those not familiar with Fred Hampton, the Black Panther Party, and the indefensible efforts made by law enforcement, the government, and the mainstream media to destroy them, the film is an enlightening tour-de-force. For those who are more familiar with Hampton’s story, however, there are definitely some frustrating storytelling decisions here that leave a lot left unsaid for reasons that feel very unclear. But with any luck, this film marks the beginning, not the end of the line. Hollywood has never shied away from repeating itself, so hopefully, Judas and the Black Messiah opens the door for many more explorations of radical lives to come because there are certainly more incredible stories out there that could use a cinematic telling.

Judas and the Black Messiah is now streaming on HBO Max.