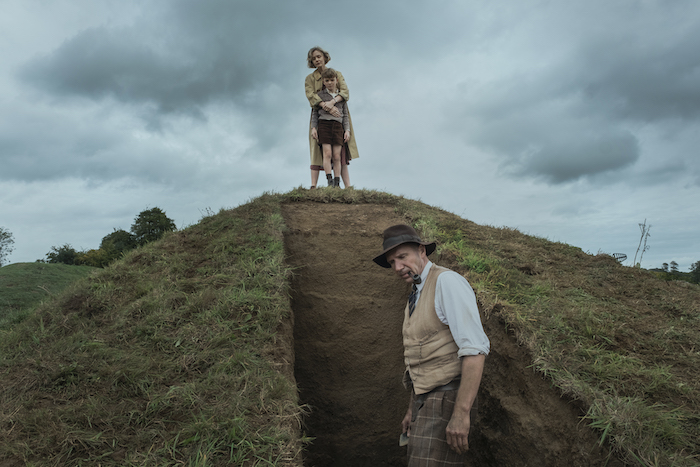 As an American, my understanding of England is that you cannot dig up a parking lot without stumbling across the remains of Richard III. So when widowed landowner Edith Pretty (Carey Mulligan) hires local excavator Basil Brown (Ralph Fiennes) to dig up a series of large dirt mounds on her property in 1939, as the UK inches closer and closer to WWII, the question is not if they will find something so much as what.

The sophomore feature from director Simon Stone (The Daughter), The Dig is an example of both remarkably elegant filmmaking and rather ineffective storytelling. Based on the true story of the excavation of an Anglo-Saxon burial ground in Sutton Hoo and adapted from John Preston’s novel of the same name, it dabbles in a lot of ideas but ultimately fails to dig deep enough to leave a lasting impression.

Moira Buffini’s script is just fine. The story focuses on the quiet connection between Brown, a whip-smart self-taught excavator in an unending quest to have his worth acknowledged by the establishment that sneers down at him for his lack of formal training, and Edith, fighting a losing battle of her own with regards to her dwindling health as she attempts to protect young son Robert (Archie Barnes) from the realities of her condition. The efforts to elevate the tensions around what is ultimately a rather quiet story about digging up a field and twist it into the beats of a three-act structure are somewhat scattershot. The Dig runs into the trouble of wanting high-stakes tensions throughout while also having a cast of characters overwhelmingly devoted to a “stiff upper lip” mentality—in other words, no one ever wants to bother anybody else or cause trouble. On the one hand, the script rather liberally throws in plot points to raise stakes, and on the other, it displays a commendable dedication to that particularly British brand of emotional repression.

Unfortunately, these two elements are most effective at undermining each other. The story touches on everything from classism to sexism, sexuality, grief, and legacy—yet the film often feels like it’s scrambling to fill space. Around the midway point as Edith and Basil run out of things to say and do, and as the significance of the find reaches government officials who promptly take the excavation into their own hands, the film interjects a pseudo-love triangle between newly married archeologists Stuart (Ben Chaplin) and Peggy Piggott (Lily James) and Edith’s cousin Rory Lomax (Johnny Flynn). Stuart, you see, is deeply in the closet, so Peggy’s unsatisfied desires look elsewhere, which is particularly understandable considering “elsewhere” looks like Johnny Flynn. How the Piggotts managed to get to their honeymoon without Peggy developing any suspicions about her husband being deeply perturbed by the prospect of so much as seeing a woman naked is left an utter mystery, as no one involved is willing to do things like, you know, talk about feelings or anything like that. So instead there are lots of longing stares and discontented gazes with minimal context. There are ways of depicting repressed characters without giving the audience an equally repressed viewing experience, but it’s a challenge this particular script chooses not to take on.

All that being said, the overall experience of watching The Dig is ultimately saved by solid performances across the board and stellar visual storytelling. Mike Eley’s cinematography is the hands-down MVP here. Favoring longer shots throughout utilizes the full potential of Suffolk landscapes in all their overcast bucolic majesty, and interesting, aesthetically pleasing framing turns many otherwise snooze-worthy sequences into something far more engaging. Sometimes this strategy goes a little too far—for example, a pan shot that awkwardly doesn’t really go anywhere, framing choices in subsequent moments that prioritize interesting visual composition at the expense of maintaining shot-to-shot continuity in a rather jarring way—but it succeeds far more often than it stumbles. This film shot more generically, all other things being equal, would rank on the snooze-inducing side of meh.

On the whole, The Dig is 90 minutes worth of content over-extended to fill two hours that still manages to make for decent viewing thanks to stunning execution. It’s a good film that feels like it could have been something great if it dug a little deeper into its characters, but instead, it peaks at being the cinematic equivalent of a skillfully painted placid landscape—pleasing but forgettable viewing.

The Dig is now on Netflix.


← The February 2021 Streaming Guide: The 21 Movies and TV Shows to Watch This Month | Who is Rita Ora, Why is She Everywhere, and Why is Britain Mad at Her? →