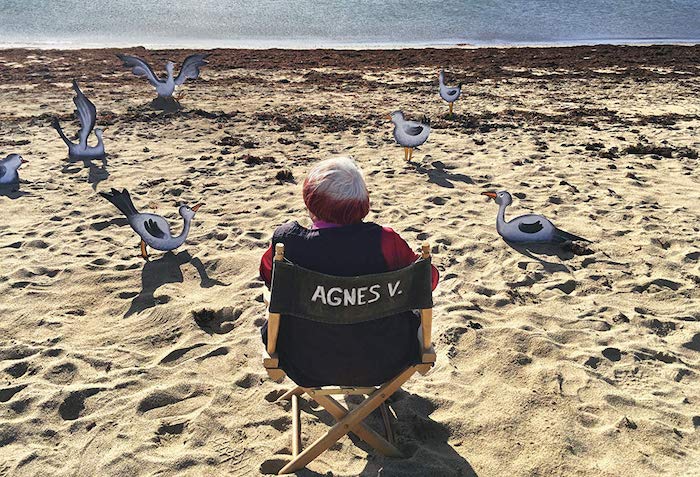 NYFF Review: 'Varda by Agnès' is a Heartfelt Farewell from a Cinematic Icon

I want to be Agnès Varda when I grow up.

By all legal and cultural standards, I am already technically an adult and have been for several years. That said, ever since I first encountered the work of the sometimes-called “Grandmother of the New Wave” in a freshman year college course (perhaps unsurprisingly, the iconic Cléo from 5 to 7) and beheld her trademark, inexplicably stylish bowl cut in a taped interview, Varda has inspired me with the sort of starry-eyed near-worship usually reserved for childhood. I wish I was as cool as she was. Not in that slightly patronizing, “Oh I hope I’m still hip and relevant at age 90” sort of way, but in the bona fide, I wish I could be as cool as she was at age 90 right now at 22 (I’m not, but fingers still crossed for someday).

Varda by Agnès, Varda’s last work and second autobiographical documentary after 2008’s Beaches of Agnès, debuted this past February at the Berlin International Film Festival just a month before the filmmaker died and is currently playing as part of the official selection at the 57th New York Film Festival, this year dedicated to Varda’s memory. Those who have seen Beaches will find the filmmaker’s final farewell a familiar experience, but no less enjoyable for that. Indeed, a true Varda connoisseur will find the documentary largely a film-by-film recap (lovely recap though it may be) of her career, with significant screen time also dedicated to her work as a still photographer and the various multimedia instillations she put together later in life. That said, this veritable highlight reel is accompanied by enough new commentary to make it worth a watch for even the most well-versed Varda fans as she shares her creative tenets of “inspiration, creation, and sharing” and proceeds to unpack her filmography a little bit like a magician sharing all her secrets on the eve of retirement.

Varda by Agnès is both a heartfelt farewell and an excellent Varda primer. Those familiar with her work will find the film a wonderful trip down memory lane while those just getting their feet wet will find plenty of motivation to explore her filmography further. Overall, Varda by Agnès feels quite similar to Beaches of Agnès in a way that suggests that if Varda’s last decade had not been quite so eventful — including an honorary Oscar and a Best Documentary Oscar nomination for Faces Places, her 2017 collaboration with the enigmatic street artist JR — Varda by Agnès would not exist at all.

Still, while the two films might bear significant resemblances to each other, their particular autobiographical flavor is quite distinctive. Plenty of filmmakers have gotten the biographical documentary treatment, and a number have been heavily involved in the making of said films, but one almost gets the sense that part of what inspired Varda to take charge in crafting her own retrospective was to evade the typical laudatory narratives. While Varda’s incredibly distinctive personality is one of the things that endears her to so many, she had a marked lack of interest in herself that echoes clearly throughout Varda by Agnès. On a trip to her childhood home, for instance, intending to film something in her childhood bedroom, she gets sidetracked and ends up instead profiling a local couple who are self-proclaimed “trainopaths” with an extensive toy train collection — an anecdote that the filmmaker herself identifies as a prime example of her life-long interest in others before herself, a quietly profound observation with a decidedly somber tint.

Varda was something of a beautiful paradox as an artist — at once the sort of formally-minded auteur who name-drops philosophers and media theorist and also the sort of scrappy DIY-er who enthusiastically gets up close and personal with garbage pickers. There’s a playful vivacity to her work that bestows it with a certain joy, and yet there’s so often there’s a melancholic tint to her work that only makes it all the more intriguing.

Varda by Agnès, much like Varda herself, is by turns effervescent and somber, a beautiful journey that had a full auditorium laughing at her antics and then brought to tears minutes later by a poignant comment about recycling. On one hand, the filmmaker’s final work clearly reads like a goodbye, but on the other hand, it reminds you that the films she created will always be here for old fans to revisit, and new fans to discover. And that’s a marvelous thing indeed.

← Hey, Joaquin Phoenix? What You're Describing Is an Eating Disorder | For Some Reason, Len Wiseman Will Direct 'John Wick' Spinoff 'Ballerina' →