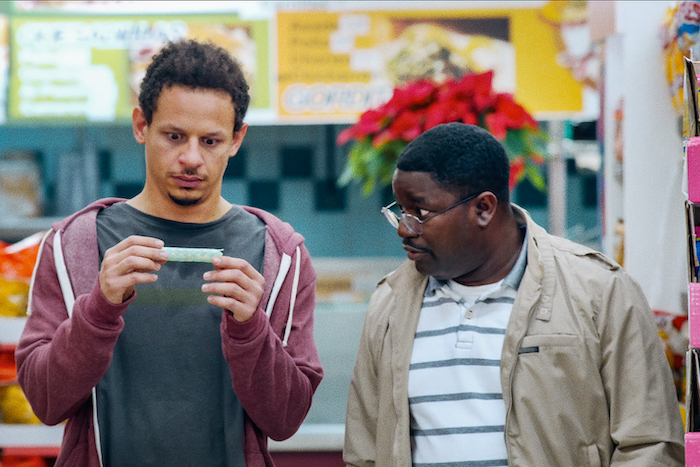 Within the realm of hidden camera prank comedies, there are two basic flavors: those where an outlandish character or set of characters is unleashed upon the unsuspecting public (Borat), and those where the series of elaborately staged pranks revolves entirely around a specific target (Windy City Heat). Bad Trip, the latest entry in the genre, follows the former school of thought as it details the misadventures of best buddies Chris (Eric André) and Bud (Lil Rel Howery) as they road trip from Florida to New York so that Chris can profess his undying love to his former high school crush Maria (Michaela Conlin) who runs a Manhattan art gallery. However, as neither have a car, they decide to borrow Bad B*tch, a ride belonging to Bud’s sister Trina (Tiffany Haddish). They don’t exactly ask, but they figure they don’t need to since Trina’s in prison. But then Trina breaks out of prison. And wants her car.

On the one hand, there’s something entertaining about having real bystanders react to seeing rather cliché movie tropes play out live before their very eyes, but on the other hand, it’s an approach that dooms the narrative sequences between the pranks that form the backbone of the movie to tepid mediocrity. Guy on a trip to confess his love to a beautiful woman he’s barely even spoken to, but simply knows he’s destined to be with. Never heard that one before. For being such a generic, and therefore relatively bland framework, it takes up too much screen time, especially in the third act.

Hidden camera films definitely present unique challenges from a filmmaking standpoint, and even in the prank sections, a lot of the framing is so aesthetically pleasing you can’t help but wonder where the hell they’re hiding the camera. Director Kitao Sakurai, a frequent Eric André collaborator, clearly has a knack for this sort of thing. There are some impressively outrageous and genuinely funny bits here, even as someone too susceptible to the cringe part to draw much joy from most cringe humor. That said, when it comes to hidden camera films, the real stand-outs separate themselves from the rest through the distinctive characters featured. This is where Bad Trip stumbles.

While Rudy Giuliani scenes are great for generating social media buzz, at the end of the day, the central appeal of Borat Subsequent Moviefilm is Borat, in all his piggish, jaw-dropping glory. Chris and Buddy are just hapless, overwhelmingly inept, overall rather nondescript dudes hanging out.

Tiffany Haddish as Bud’s convict older sister Trina is a gem, as always, and easily the most entertaining character in the film. While the Chris and Buddy sequences just feel like bits enabled by the duo being rather impulsive and not especially bright, Trina’s storyline is really much more about the unsuspecting public dealing with the chaotic storm that is Trina herself, and are easily the most entertaining parts of the film for it. While she portrays the most outlandish character, she’s also the most compelling. She strikes up a conversation with a random stranger in a shop about her car and its specific shade of pink, the same as Pepto Bismol, because Bad B*tch “also fixes anything.” She quickly follows up that line with another gem, “You know, I like to drink Pepto Bismol with a little bit of Hennessy in it.” Watching the bystander she’s talking to grow increasingly flustered as the situation continues to escalate is hilarious, and entirely reliant on Haddish’s ability to be utterly convincing at Trina.

Though they’re the focus of the movie, Bud and Chris are far less developed characters. Bad Trip’s main storyline really feels primarily like a series of skits trying to answer the question “What is the most awkward and/or outrageous situation we can put bystanders in?” (The answers include a libidinous gorilla, a particularly scandalous use of a Chinese finger trap, and projectile vomit). Beyond Chris’s renewed obsession with his high school crush Maria after crossing paths one day, the two friends’ journeys feel less like arcs and more like Eric André and Lil Rel Howery just ad-libbing as they go, a loose context that allows for each increasingly outrageous bit, rather than coming across as especially distinctive individuals.

For lovers of hidden camera comedies, Bad Trip is a solid entry in the genre worth a watch. It’s also worth checking out for fans of Tiffany Haddish, who gets to shine here in a way she hasn’t in a movie since perhaps her breakout Girls Trip.