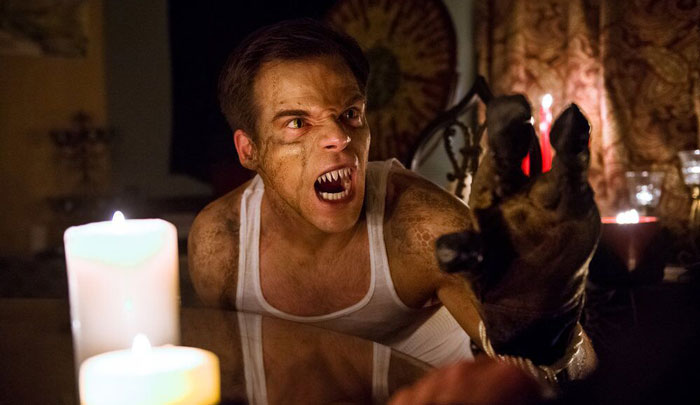 With a premise as willfully stupid as The VelociPastor, it doesn’t really matter if the movie is “good.” As the name suggests, it’s about a priest who is a sort-of were-raptor that uses his dino-powers to fight injustice and sin. Also, there are ninjas. Sold, right? Why bother with reading my review at all, right? Well, because The VelociPastor is far better than it needs to be.

Don’t get me wrong, the premise is just as dumb as advertised. Writer/director Brendan Steere centers his movie on Doug Jones (Greg Cohan), a freshly minted man of the cloth whose faith is shattered when his supportive parents are blown to smithereens right before his wide-eyes. His mentor, Father Stewart (Daniel Steere), urges Doug to go on a retreat to rediscover his faith. So, he goes to China, which we know because the title cards says “CHINA,” and then Doug says, “China!” There’s some mysterious/magic business involving a mythic raptor claw and a woman in a karate gi (which yes is Japanese, not Chinese) who speaks no English except the phrase “Dragon warrior.” Yadda yadda yadda, Doug returns home and has an unexpected and fateful meet-cute with sex worker Carol (Alyssa Kempinski) when his raptor-transformation kicks in instinctively to rescue her from a violent creep. She’s an archetypal hooker with a heart of gold. He’s a velociPastor. Their love is forbidden, but their attraction is undeniable. And that is bad news for her pimp, Frankie Mermaid, so called because he’s “swimming in bitches.” So, Doug must do whatever it takes to protect Carol and then his whole neighborhood from the vicious organized crime ring that has it under siege! And this is just into the second act. We haven’t even gotten to the ninjas with a scheme of cocaine and Christian ministry.

The VelociPastor feels like a loving tribute to the trashy B-movies kid-me would sneak-watch on late night TV. The plot centering on a good, pious man sets up for him to be affronted by an onslaught shocking debauchery. Naturally, he’ll encounter horrid foes, engage in gruesome battles, have a steamy sex scene, and plenty of horrendous dialogue. And in the end, we expect him to either get the girl or watch her die, which thrusts him into his final climactic rage-fueled showdown! It’s plenty of the cheap, juicy ploys that made those late night movies tons of fun. And on top of all that: a raptor fights ninjas. And yes, it looks exactly as hilarious and cheap as you’d expect for a movie made for (checks notes) $35,000. Yes. $35,000.

You know those inflatable T-Rex costumes so popular and so inexpensive that inspire a wide-array of viral videos? The raptor here looks more expensive and yet worse. For most of the movie, you see it in snatches, a clawed (rubbery) hand here, a chomping (rubbery) mouth there. But in the finale, his final form is revealed and comically underwhelming. And that’s not a glitch. It’s a feature. The VelociPastor knows exactly what B-movie audiences expect, and pushes each element a bit further to a delightfully daffy extreme.

Sometimes, it’s something small, like the sacrilege of showings priests getting drunk on communion wine. Sometimes it’s dialogue that is both so wrong and so right, like this bit of wisdom from Father Stewart, “Your parents died, Doug. It’s what parents do.”

Early on, such elements reveal that Steere isn’t making just another B-movie. He’s making a shrewd but loving parody of them. The jokes are in seeing the seams, sometimes literally, like in the raptor costume, or the string-tie at the back of the priest’s clearly-bought-at-a-Halloween-store robes. Some are in the edit, which includes montages that are almost criminally long, like a sex scene overwhelmed with red and green lighting and swarmed with wipes and insert shots all while aggressive pop-rock music blares. That this scene is still pretty sexy is either a brilliant joke or something I should maybe talk to a therapist about. Of course, there’s a training montage bit. But Reid’s got subtler jabs too, like close-up shots that linger so long on an actor’s face that you can almost hear the director say “cut” in the distance. But my favorite might be a running gag of a tilt gone awry.

At the end of a scene, the camera might tilt up (or pan sideways) and away from the characters. Typically, the benign footage of a building or tree might be cross-faded to the next scene, so you barely notice this transition technique. But here, Steere draws attention. He not only picks takes where the tilt’s motion is clumsy, but also has the shot last far too long. It gets snared haphazardly in trees and lingers amusingly, urging us to see the humor in this awkwardness. These elements blend beautifully with the cast’s performances that range from wooden to over-earnest to cringingly theatrical. All of this also suggests that the Chinese “ninjas” aren’t woefully ignorant conflation of Asian heritages, but a winking barb about Orientalism in American movies. And while the lead female role is a sex worker who is repeatedly shamed by the priests, the movie doesn’t use her as an excuse for T&A. Actually, the sex scene shows more of his skin than hers, and her costumes are very tame, not just in the world of B-movies but even compared to Julia Roberts in Pretty Woman.

Watching The VelociPastor, I was reminded of Will Ferrell and Kristen Wiig’s controversial Lifetime movie A Deadly Adoption, which leaned so keenly into the tropes of that subgenre that audiences unfamiliar were totally baffled by it. Meanwhile, those of us who can’t get enough of that kind of so-called “trash” got to revel in how that wacky made-for-TV movie prodded at the best and worst bits of those fear-prodding, tear-jerking thrillers. Part of what made that movie so much fun was it played on both levels. You could watch it as just another hyperbolic cautionary tale that involves envy, deception, and death. Or you could see it as two wickedly clever comedians tangoing along the line of tragedy and comedy, simultaneously relishing and mocking Lifetime’s cliches. Steere succeeds here too. If you’re looking for a ludicrous movie for a fun time, The VelociPastor delivers with plenty of violence, action, and bonkers bits. But this dumb movie has a surprisingly sly sophistication that also makes it a tribute and commentary of B-movies, cheekily mocking their sloppiness while celebrating their wild creativity and bonkers ambitions.

Admittedly, I set out to laugh at The VelociPastor. But Steere instead made a clever (girl?) movie that invites us to laugh along with him.

The VelociPastor is now on digital and DVD. 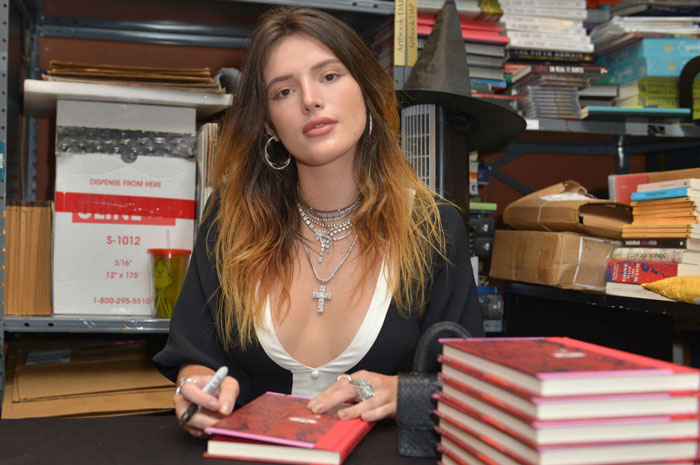 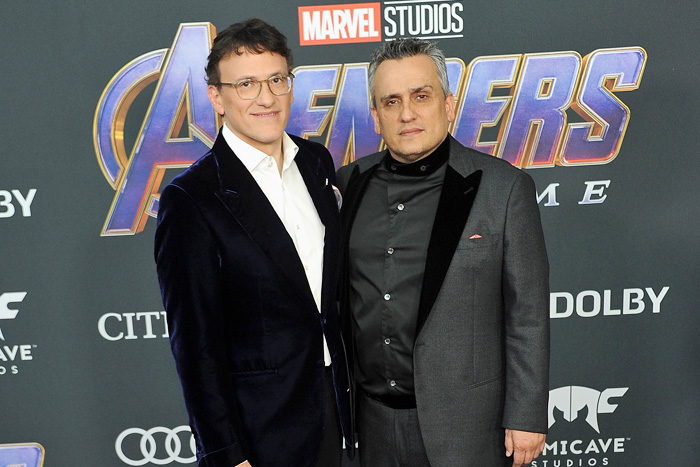 The Russo Brothers Seem Very Obsessed with Wolverine Lately, Let's Read into That