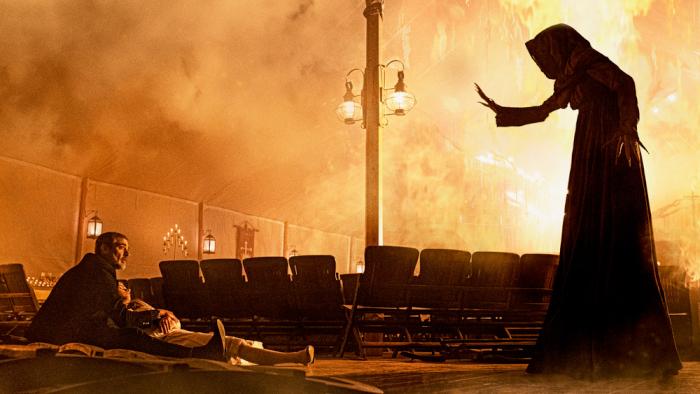 Review: 'The Unholy' Couldn't Get Me To Kneel

Corruption of faith is a beautiful place to start for scary stories. Though we all remember The Exorcist for throwing crosses into haunts, floods of media have tackled religious demon lore that often plays with widely held beliefs. Coming in a year where 30 Coins added new lore to Catholic horror stories is The Unholy, another attempt at slipping fresh demonology into the Christian horror lexicon.

Gerry (Jeffrey Dean Morgan) is a huckster reporter for a horror website. He would sell his soul for a story, which means he is willing to stage events in order to drag a supernatural story out of a cow’s butt. When he takes a drive to a sleepy small town to chase the next big spooky piece, he smashes his way into the center of something much bigger than what he could ever fabricate. Alice (Cricket Brown), a local girl held fondly in the hearts of the town, is hearing impaired and doesn’t vocalize. The night Gerry visits, she can suddenly hear and speak. Alice claims her change is as a result of being spoken to by The Virgin Mary. Mary has given her the ability to heal, and Alice stuns her entire town with newfound miraculous capabilities. Skeptics line up to confirm whether the miracles are real, but the town priest, Father Hagan (William Sadler) fears that the reality of them serves as a warning. Hagan, convinced these happenings are both divine and genuine, warns that when miracles are present, the unholy is not far behind.

Alice continues to heal townspeople and soon starts to demand faith in return. Faith that’s granted by townspeople. Faith that’s also tested by doctors examining the healed, by the diocese applying a test for the miracles, and by Hagan who remains doubtful, even after his recovery from a lung disease by Alice’s hand. As doubt starts to swirl around Alice, people start dying, and Gerry and those he trusts try their best to identify what dark forces are afoot in order to thwart them before any more blood is shed.

There’s a lot of story stuffed into this “false god” horror movie, much of which is inconsequential to the primary narrative. Writer/director Evan Spiliotopoulos adapted the story from James Herbert’s book, Shrine, and it’s possible too many plot points were brought over from the denser text. There are forgettable threads that stop the main story in its tracks, detracting from the otherwise haunting story of a bastardized Virgin Mary. Buried in a convoluted tale about tested skeptics, the power of the church, and a disavowed journalist is a compelling horror about the exploitation of faith by darker forces.

Visually, Spiliotopoulos has styled a stunning universe upon which to lay this story. The ornate church is commanding in the sleepy town, and it engulfs you immediately in a world where the people would all look to the clergy for the ultimate truth. Where the direction gets lost is the timing of the scares. There are a few jump scares that don’t hit, and some outdated screen-based camera gags. The film does better when it doesn’t focus on the quick scares, and instead focuses on its creation of a haunting vibe in the shooting of its setting.

The core casts performances are mostly stale, save for the standout work of Brown. She expertly plays the unquestioned faith of a sun-shiny girl who loves the church in a way that is simultaneously inspiring and haunting. It works in the few scenes where she is center stage, but feels juxtaposed to the mostly wooden delivery from Morgan.

There is a lot of fright to be derived from the profanity of faith, and The Unholy is at its best when it’s exploring that. Where it is rendered lifeless is in its exploration of back story, uninteresting plot threads, and its impulse to exhaustively explain every detail of the overly complex lore. It takes an indelicate approach in representing disabilities and suicide. Plus, it can’t pin down exactly what it’s saying about the church, which renders much of the movie difficult to digest. Religion is excellent fodder for horror. While it’s not stale to explore religion for scares, to do a standout job of it, a film has to bring something new. The Unholy tries to add something to the story of corruptible faith, but by throwing too much at the wall and never bringing it together, it whiffs it.

The Unholy comes to theaters on April 2.