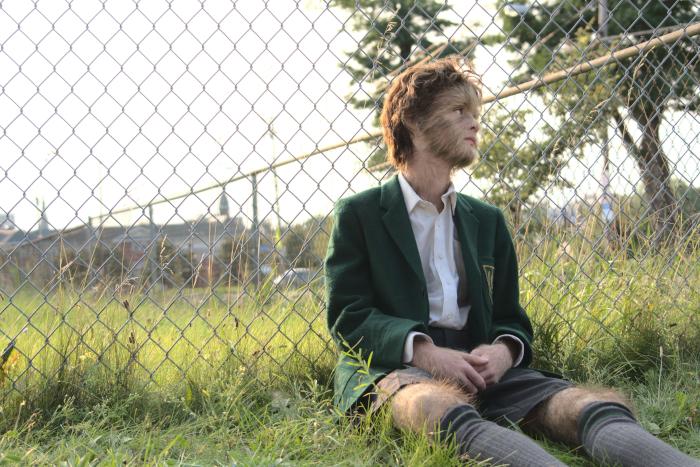 Now On Demand: 'The True Adventures of Wolfboy' Is A Must-See Coming-Of-Age Fantasy

This review was originally posted for Fantastic Fest 2019.

A fairytale set amidst a grimy backdrop of burlesque clubs, carnival freak shows, and abandoned lighthouses, The True Adventures of Wolfboy is a dark yet darling gem, discovered at Fantastic Fest.

The directorial debut of Polish filmmaker Martin Krejcí, The True Adventures of Wolfboy follows 13-year-old Paul (Jaeden Martell), who has trouble facing the world because his face is covered in fur. See, Paul has hypertrichosis, a condition that causes hair to grow thickly all over his body, including his face. As you might imagine, this makes him an object of ridicule by merciless bullies who tease that the absentee-mom Paul has never known must have been a literal bitch. The boy’s father (a warm Chris Messina) does his best to teach his son dignity and self-love, but every move he makes just makes things worse. So, Paul runs away. On a quest to find his missing mom, he bumbles into a life-changing adventure.

His adventure is regarded as a storybook, with chapters being announced through gorgeously illustrated title cards that like “Wolfboy Deals With The Devil,” “Wolfboy Meets A Mermaid,” and “Wolfboy and the Pirate Queen!” Then, each section offers a clever modern twist on these fairytale archetypes. A pink-haired punk (a spunky Eve Hewson) with an eyepatch and a penchant for robbing convenience stores for cash and snack-cakes is the pirate queen. The devil (executive producer John Turturro) is a carnie with a silver tongue that matches his long ponytail, which dangles over slickly tight, tight leather pants. (Which makes perfect sense because silver-fox carnie John Turturro is hot as hell.) And the mermaid in question is a spirited aspiring siren named Aristiana (the sparkling Sophie Giannamore), who practices her bubble-blowing ballad number in her backyard’s baby pool before belting it out on stage to an audience of misfits and drag queens.

Blending urban decay with whimsical fantasy, the script by Olivia Dufault is exhilaratingly imaginative. And in this way it feels like a fresh update on the kid-centered adventure movies of the ’80s, like E.T., The Goonies or The NeverEnding Story. And it’s easy fall for its charms alone, bolstered by Krejcí’s production design that makes the mundane extraordinary with a punch of color or a pop of bubbles. His thoughtful visuals also scratch texture and subtext into every frame. For instance, in Paul’s room, his full-length mirror is covered in stickers and paint at the top, obscuring the face he can’t stand to see. The rough concrete blocks of a graffiti-slicked bar exterior play sharp contrast to the soft, hyper-feminine dresses that Aristiana wears before them. These details ground the fantasy into a gritty reality, but also set up the heartwarming message at the center of The True Adventures of Wolfboy.

This is a film for any kid who’s ever felt like a freak. Its first frame is Paul, looking into a mirror reciting, “I’m normal. I’m a regular kid. I’m just like everybody else,” a mantra his trembling eyes tells us he does not believe. We’ll see him mocked, bullied, battered, prodded, and chased, and our hearts will ache for him. But also, we will see him face the world, learn to fight back, and find his tribe. And he’s not the only one. While Paul’s story speaks directly to those who feel ostracized because of physical differences or conditions they cannot control, Aristiana’s arc has a proudly LGBTQA+ context as she is a trans character, played by a trans actress, written by a trans writer. She and Paul’s journey begins at different points, as Aristiana already loves herself, and is forced to wait for the world—specifically her mother—to catch up. But together they create a chosen family that can give solace where their blood relatives have failed. And in this way, this coming-of-age story speaks for queer kids too, proudly and clearly. But for all those who’ve felt outcast and alone, The True Adventures of Wolfboy offers words to live by: “The world is going to be mean to us no matter what we do,” says a third-act sage. “So at least we can not be mean to ourselves.”

In the end, The True Adventures of Wolfboy is an enchanting exploration of adolescence and finding your path. It’s alive with color and imagination and roughed up with reality to ground its coming-of-age story in a place of breathtaking truth. It’s joyous and tragic, thrilling and poignant. In short, it’s a bit of magic and an absolute must-see.

The True Adventures of Wolfboy is now On Demand and on digital.