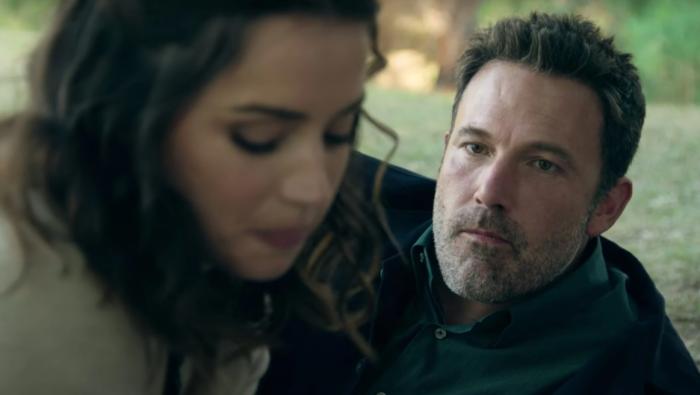 Vic and Melinda Van Allen are beautiful, have the perfect home, and a beautiful daughter they dote on, but their marriage is loveless. What holds them together is a precarious arrangement: Melinda is allowed to take lovers, as many as she so chooses, as long as she doesn’t desert their daughter Trixie. The tension between the pair is palpable, a mixture of loathing and lust that seems to drive Vic to ruin. At an awkward party the pair attend, Vic tells Melinda’s latest paramour that he killed her last lover. He claims he’s joking at first but soon this claim seems to come true in ways that few could have predicted.

While the most striking moments of the film focus on the Van Allen marriage and its tangled mind games, the thrust of the plot comes in the form of a frustrated and deeply nosey writer (the ever-reliable Tracy Letts) who becomes convinced that Vic is a murderer and needs to be investigated. It’s a narrative focus that makes structural sense, but one can’t help but wonder why this guy cares so dang much about things.

Lyne is a director whose career is often described, albeit positively, with the word ‘trashy.’ This is, after all, the man who gave us 9½ Weeks, Fatal Attraction, and Indecent Proposal (and one seriously misguided adaptation of Lolita.) His films are populated by beautiful people engaged in scandalous relations that push the boundaries of their audiences’ self-awareness. If there is a line between art and trash, Lyne has never cared to acknowledge it, not when there’s so much fun and substance to be mined from the ways that humanity wields sex like a weapon. Extra-marital affairs are a big part of his work and they seldom end well, which makes Highsmith’s novel perfect for his approach. Whether you find Deep Water to be art or trash will depend on your patience for Lyne’s bag of tricks. Here, at least, they are very effective ones.

This is classic erotic thriller stuff, right down to the glossy cinematography and obscenely expensive houses populated by hot rich layabouts who seem to only think about decadence and deceit. There’s actually not that much f**king here but Lyne is incredibly adept at giving the illusion that there’s just constant sex going on, creating this mood of almost stifling sensuality. Melinda has affairs for pleasure, sure, but the real tension comes with how much they drive Vic, something she takes as much glee in as the indiscretions themselves. Vic is frequently the voyeur, peeking at Melinda through windows or the rails of the banister to see what his wife is up to.

If you only need one reason to see it, see it for Ben Affleck, who’s giving one of his most striking performances as a bitter user who’s used to being the most manipulative man in the room. There are echoes of his turn as the smarmy wronged man in Gone Girl but Vic knows exactly what he’s doing at every turn. He seems to have a lackadaisical attitude towards life itself, with the exception of his sassy daughter and his pet snails (yes, there’s a lot of weird snail stuff in here, which our lovely Roxana wrote about for Vulture!) When Melinda returns home from various liaisons, Vic glowers at her in a way that you could easily read as lust or fury. Does it really matter that they’re indecipherable? We see the simmering resentment and intellect at play that’s peak Highsmith: gorgeous people doing despicable things. De Armas is no slouch either, sensually callous and with chemistry to burn with Affleck (isn’t it sad that it feels weirdly rare to see two genuine movie star sex symbols have this sort of heat on-screen?)

It’s easy to dismiss a film like Deep Water in that Lyne-esque way as trash, a film knowing enough in its machinations to be ahead of such accusations. Of course, it takes real skill to make good trash, as any expert in the genre will tell you. Lyne knows what he’s doing and the striking mood of the film helps to carry it over some of the discrepancies in the script (you do get the feeling that this film was originally longer, which would explain some of the pacing bumps.) Highsmith’s work is a tightrope of tension and transgressions, and the script here flattens some of her best features, but with Affleck and de Armas being on fire like this, you almost don’t care. There is a problem with a Patricia Highsmith adaptation of all things having a ‘don’t think too much and just vibe’ approach given that her work is so proudly brainy. Still, I couldn’t help but be won over by this almost nostalgic offering. We truly do deserve more sexy movies.

Deep Water is now available to watch on Hulu in the US and Amazon Prime in the UK.