Review: The Russo Brothers Embarrass Themselves with the Abysmal Opioid Addiction Drama ‘Cherry’

I’ve been rewatching Freaks and Geeks lately, and in the episode “Noshing and Moshing,” de facto freaks leader Daniel Desario (James Franco) decides that he wants to switch up his look. He’s tired of being who he is. So he buys a Black Flag album, and he cuts holes in his T-shirts and jeans, and he loops together chains of safety pins on his leather jacket, and he whips up eggs and fashions his hair into gigantic silver spikes. When he gets to the Armpit club, Daniel is overjoyed. He can yell here, he can scream here, he can shove people around here. He can finally vent out the rage and frustration and discomfort he’s been feeling for, well, years.

That high lasts for a little while, until he’s in the bathroom, checking on the blood leaking from his head after he got kicked by a crowd surfer. Another guy approaches him, and complains about all the “posers” in the club that night. Daniel is immediately defensive, and offended. He’s not a poser! He’s the real deal! But eventually, of course, Daniel admits that this isn’t him at all. He’s not really a punk. He’s still just a kid, and he hasn’t figured out who he wants to be yet. That indecision is forgivable in the long run. For that night, though? For that night, Daniel was indeed a poser, and he wrapped himself in a kind of disguise that positively reeked of insincerity.

I say all this because all I could think about while watching the Russo Brothers’ latest film, Cherry, was, “Holy shit, these posers.” And I understand that is not nuanced film criticism! I too expect more from myself! But jeez, what an absolute mess of superficially explored themes about addiction and America. The Russos think they have crafted Hell or High Water by way of Scorsese or Trainspotting by way of Taylor Sheridan, but those films felt genuine. The casting was right, the script was right, the character motivations were right, the characters themselves were economically developed and convincingly rendered. I cannot say any of those things for Cherry, which is adapted from Nico Walker’s semiautobiographical book, written while the U.S. Army veteran was serving time in prison for robbing banks.

Although this storyline comes from Walker’s own life, it is rendered here without any sense of believability. This movie is an unconscionable 140 minutes and goes from Ohio to Iraq and back, but you won’t feel like Cherry is an actual journey. It is a slog. It is grueling. It is a drab menagerie, a washed-out palette, a riot of misery. This movie is being advertised as the conversation starter about the opioid addiction crisis in the United States, and I suppose that in a bleak way that makes sense. Two boring, white, barely out of their teens college students start taking drugs, and then jump to Oxy, and then jump to heroin. “Oh, I’ve seen this movie,” you might say. “It was called Requiem for a Dream.” Yes, reader! And that was a better movie, in practically every way, than this one! 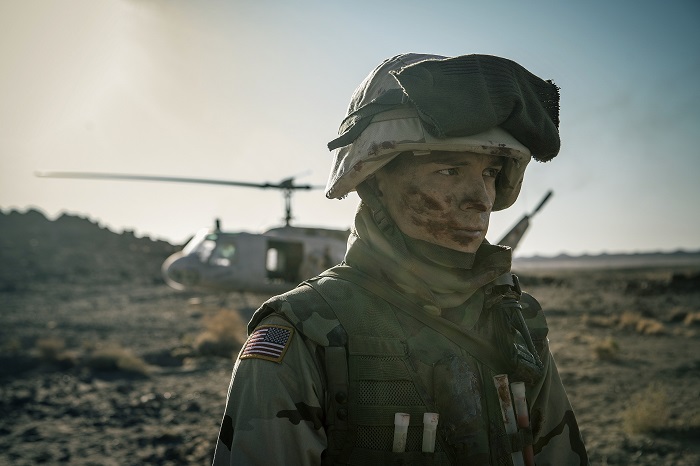 Darren Aronofsky now makes me want to eyeroll my eyes so hard that I give myself a headache, but he charted how addiction is nefarious and insidious, how it affects people of all ages and genders and races, and how devastating its effects can be on those people because of their different lives. You might end up in prison. You might end up losing your mind. You might end up turning to sex work to support your addiction. Requiem for a Dream is a movie I never want to see again because of how excruciatingly soul-crushing it was, but goddamn, it had style. Cherry, meanwhile, is a movie I never want to see again because it is inexcusably boring, because Holland is so miscast, because its sole female character is a goddamn joke, and because this movie has nothing to actually say about how America treats its young people, its soldiers, its veterans, its addicts. Instead, the Russos prefer to flex their technical skills throughout, which makes for such a jarring combination with this narrative that the result is almost garish. Battle scenes in Iraq use drones and extreme angles to capture an exceptional amount of post-Sept. 11, 2001 violence; fish-eye lenses and random black and white sequences tell us when these characters are high; a prolonged dolly shot charts a character’s road to recovery. Remember that opening scene from Uncut Gems, where we traveled through Adam Sandler’s rectum? The Russos put their own spin on that, too, and let me tell you with my whole heart that no one asked for this.

It’s all made worse by how toothless, broad, and utterly without nuance this plot is. Did you know that war is bad? Did you know that doctors were overprescribing opioids? Did you know that young people make really dumb, stupid, selfish decisions? (What I actually can’t figure out, though, is if these characters’ utterly ludicrous actions and unbelievably stupid choices are purposefully so, as a way of showing the characters’ youth or naivete, or if this approach is a flaw of Angela Russo-Otstot and Jessica Goldberg’s screenplay.) Anyway, the Russos think they’re being edgy when they have Holland’s strung-out character break the fourth wall, or walk us through his terrible life through elongated voiceover, or imagine the name of banks as “Shitty Bank” and “Bank Fucks America,” and that’s the extent of their analytical approach. Real cogent commentary, guys! Truly sticking it to the man with this embarrassing shit! 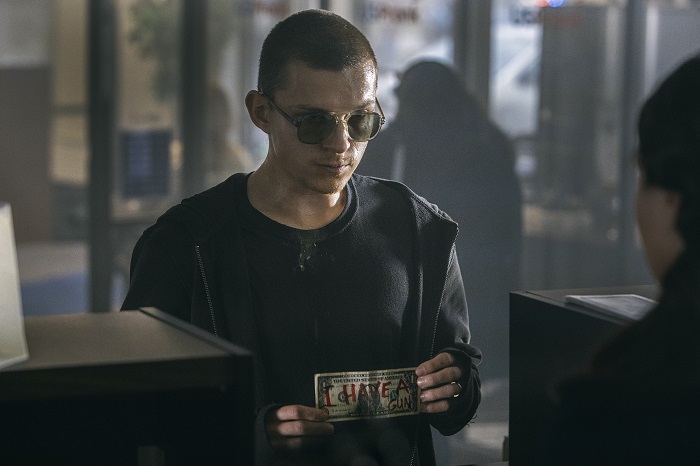 Cherry follows a nameless young man (Holland, who did far more interesting work in the weirder, more singular The Devil All the Time) who is already an addict when we meet him, robbing banks to support his and his wife Emily’s (Ciara Bravo) habit; we then travel back in time to “Part One” (yes, of course this film is divided into chapters for maximum faux-pretentiousness), when the two college students met in 2002. They fell in love fast. She threatens to leave because he means too much to her. He impetuously joins the U.S. Army because she means too much to him. He’s sent to Iraq for two years, sees a bunch of friends blown up in front of him, returns to Ohio, can barely get a job making $8 an hour doing construction, and starts popping Oxy to feel better about his shitty life. For some reason, Emily starts taking drugs too, because she’s so torn up about his addiction, or something? And then all of a sudden they’ve graduated to shooting heroin into each other and shitting their pants when they don’t get a fix and getting involved with a local scumbag drug dealer who is literally given the character name Pills & Coke, and is played by Jack Reynor in double polo shirts with popped collars. Better or worse than the bear suit in Midsommar? Hard to say!

It is all so predictable, and yet Cherry really thinks it’s saying something, and it is absolutely not. That’s not to say that a movie shouldn’t be made about America’s opioid crisis, or that a real examination of the ongoing PTSD suffered by the young soldiers sent to fight in Afghanistan and Iraq in immoral wars isn’t a valid use of our cinematic time. Give me those movies with an actor who can really sell this listlessness and resentment—not Holland, who always looks like he’s playing grownup. Give me these movies with a director or directors who can actually immerse us in a recognizably downtrodden America—not the Russos, who are more interested in trying out nifty camera tricks than in giving this material the thoughtful treatment it requires. Give me these movies with a female character who is more than just a lingerie-wearing Lolita type, and with dialogue more nuanced than “I’m a fucking war veteran and you’re treating me like an undesirable.” Give me anything but Cherry.

Cherry is playing in limited theaters as of February 26, 2021, and hits streaming on Apple TV+ on March 12.

← #MyFamilyIsWeird On 'The Tonight Show' Is The Delightful Distraction I Needed Today | Trailer Round-Up: 'The Barbarian And The Troll,' 'Oxygen,' 'Monday,' And More →