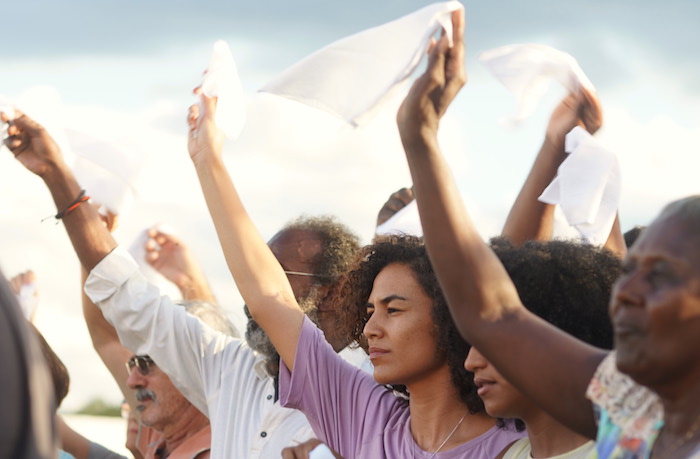 Shortly after the death of their beloved matriarch, the eponymous rural village of Bacurau discovers that they have been wiped off the map. As far as satellites seem to be concerned, they’re not even there at all. The reasons for this, the villagers soon discover, are far stranger and more sinister than they could have initially imagined.

Despite the basic premise sounding a tiny bit familiar, the latest work of filmmaker Kleber Mendonça Filho (Neighboring Sounds, Aquarius)—this time sharing the director’s seat long-time production designer Juliano Dornelles—is no Brazilian Brigadoon. Instead, Bacurau is a refreshingly sharp-witted, sci-fi adjacent neo-Western with daring social commentary that feels almost along the lines of what Westworld could be if it wasn’t so singularly focused on proving its own cleverness.

As a critic, the experience of seeing a film that feels like something new and original becomes rarer and rarer with time, and all the more precious for it. For all of its strengths and weaknesses—as Bacurau has both in spades—originality is definitely among the film’s virtues, a trait that puts me in a frame of mind to be perhaps more forgiving about aforementioned weaknesses than I might be under different circumstances.

Overall, Bacurau is a good movie that feels one edit away from being great—a handful of loose plot threads left hanging, maybe 10 minutes’ worth of superfluous stuff that could use a good trimming. For instance, while its sense of humor in spite of its frequently heavy subject matter is delightfully refreshing, it sometimes goes just a little too far out of the way of anything narratively relevant in search of a laugh. Importantly, though, even if it can sometimes go too silly for its own best interests (e.g. a running gag involving a flying saucer-shaped drone), when Bacurau gets serious and tackles heavy subjects, it does so with intent and thoughtful points to make.

It takes a little bit of time for the film to build up steam in ways that make it feel a little like a first draft, like Filho and Dornelles only really figured out where the story was going about 30 pages in. Not only does the beginning of the film seem a little aimless, but in retrospect almost feels like it belongs to a different story entirely. The first act follows Bacurau native Teresa (Barbara Colen) quite closely as she returns home for her grandmother’s funeral, but the narrative soon swerves into an ensemble affair, which it remains for the rest of its run time, revealing the most accurate description of the film’s protagonist to be the collective community of Bacurau, of which Teresa is only one of many members, and by the end, not even the most prominent figure by a mile.

Once Bacurau hits its stride, it’s truly something special—pointed, uncompromising social commentary with a delightfully devilish sense of humor. In subject matter, it’s a fascinating blend of personal and political, local and global, universal and highly specific. The film has a clear vision, a distinct voice, and important things to say. So rarely do all these stars align, and the film’s strength in this regard is more than enough to compensate for its considerably rough edges. It’s two hours of thought-provoking entertainment that are well worth your time, even if it is tragically easy to imagine an alternate universe where a more polished version of this film exists, something truly great instead of just remarkably good.

← Let's Talk About THAT Jennifer Lopez Dress | Review: CBS's 'All Rise' Is Well Intentioned But Mediocre →