Now On Netflix: ‘The Outpost’ Thrusts You Into the War in Afghanistan, and Then Tells You Exactly the American-Heroism Story You Expected

There were a viral Twitter prompt going around this past weekend, one that posited Lin-Manuel Miranda’s Hamilton as the defining work of the Obama presidency and asked which piece of pop culture captured our current and most-recent years under Trump. We had this conversation in the Pajiba Slack, too, and suggestions included Get Out and Succession and Space Force. I thought of Joker, Todd Phillips’s blustering and meaningless ode to revolution, or whatever. And even though I had just finished The Outpost, an action film about the 2009 Battle of Kamdesh in Afghanistan—even though this movie very clearly does the whole “Amurrica!” thing—I didn’t suggest it as an example. Because a movie like The Outpost exists outside of Trump time, even outside of Obama time. This is the kind of American war movie Hollywood has made for decades, and will continue to make for decades to come. Imperialism operates through Trump, but he’s not the only one.

From director Rod Lurie, The Outpost follows Bravo Troop 3-61 CAV, 50 or so men who are stationed at the incredibly remote Combat Outpost Keating. In 2006, the film informs us, “the U.S. Army established a series of outposts in northern Afghanistan to promote counterinsurgency.” The soldiers were responsible for building connections with local Afghans (mostly village elders), promising to provide them cash for various projects (like building schools or other community resources), and essentially discouraging them from aiding and abetting the Taliban. (The film introduces them as PRT Kamdesh, with “PRT” standing for “Provincial Reconstruction Team,” but the film spends its first hour denigrating the collaboration effort.) Lurie’s roving camera makes clear to us the impossible-to-defend position of this outpost, at the bottom of a valley in the Nuristan Province, surrounded on all sides by the staggeringly high granite walls of the Hindu Kush Mountains; American soldiers and their allies are basically fish in a barrel. “Everyone at the outpost was going to die,” Lurie’s intertitles inform us, and then we’re thrust into the pitch-black night, arriving at Combat Outpost Keating like it’s an alien world.

Because this is “based on a true story,” Lurie identifies practically every soldier and every location in this outpost with bright yellow, all-caps text: guys like Romesha (Scott Eastwood), Gallegos (Jacob Scipio), Yunger (Alfie Stewart), Scusa (Scott Alda Coffey), and Kirk (Jack Kesy). They’re all young, but many of them have seen combat before, having served in Iraq or elsewhere in Afghanistan; Romesha, as a staff sergeant, is particularly trusted by his men for his take-no-shit attitude and acute combat sense. And the men also all respect their captain, Keating (Orlando Bloom), who has a deft hand with the locals. When he calls a meeting with the village elders, Keating is patient but authoritative, promising money and peace, Inshallah, and the Afghans lay their rifles at his feet. 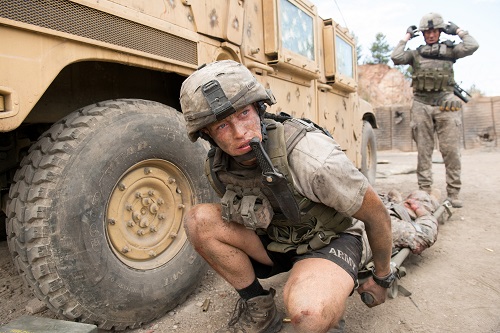 But The Outpost has already informed us that these men are going to die, and the film measures time by camp commanders; a new section of the film begins each time one of those leaders is replaced with someone else. So there is a focus not just on who is in charge, but on the daily lives of these soldiers, too: On the bullied Carter (Caleb Landry Jones), who dropped out of the Marines, who is annoyed by the other soldiers’ “frat-boy bullshit,” and who doesn’t consider himself friends with any of these men. On Scusa and his dog, who is beloved by all the American soldiers. Meanwhile, the first time we see an Afghan soldier in this film, the man isn’t presented as an ally putting himself in danger for aligning with American invaders, but as some overzealous Muslim who wants to kill Scusa’s dog because of his barbaric religious beliefs. It’s not very evenhanded! Practically every Afghan soldier or interpreter here is mocked by the Americans for one reason or another! Here’s a reminder of how the U.S. military has just abandoned these Afghans to the Taliban, instead of bringing them over to the U.S., as they had promised! And the other ways these soldiers are characterized will be recognizable to you from watching any other war movie: a lot of boys-will-be-boys joking around, guys missing their wives and their kids and their moms, some vague but not very insightful musing about why “they hate us.” The screenplay by Eric Johnson and Paul Tamasy, adapting the nonfiction work The Outpost: An Untold Story of American Valor by CNN’s Jake Tapper, is so respectful that it very nearly tiptoes into blandness.

Then the second hour of the film starts—a coordinated attack by the Taliban on the outpost, with hundreds of fighters streaming down the mountain walls toward the front gates, with their snipers and their missiles—and Lurie thrusts us into Hell. Explosions going off everywhere. Men missing limbs. Men trapped in tanks. Men running out of ammo. Men dying. The Outpost is technically fine: Handheld and drone cameras do a lot of work here showing us the simultaneous expansiveness and claustrophobic nature of the outpost while it’s under attack. But the film loses a certain visceral quality because there’s an imbalance here between that earlier intertitle, the one that stated everyone at PRT Kamdesh was going to die, and how Lurie films the battle sequences, with a focus in particular on the heroic actions of Sgt. Romesha. Eastwood has one facial expression this whole movie, a look of intensity that suggests he’s just smelled his own fart, and his performance is too wooden to suggest any real fear, or the bravery that rises up to quench it.

He’s out-acted consistently by Jones, who plays the misfit Carter—twitchy, loose-limbed, prone to talking back to orders he doesn’t like. The other soldiers see Carter as a wild card, but Jones well captures the recklessness needed for a man whose job it is to deliver ammo to gunners during an attack, and his narrative during that final hour of the film—when he makes it his mission to recover a fellow soldier and bring him to safety—is the most engaging.

But honestly, I’m tired of writing reviews like this: of movies that apply a false “both sides” approach to the wars in Afghanistan and Iraq, and that refuse to contextualize the devastating effects of these post-Sept. 11 conflicts on the Middle East in general. “Like they say, freedom ain’t free,” the soldiers say to each other, and that’s true. Eight American soldiers died in the Battle of Kamdesh, and 27 were injured. Those men had families and friends and loved ones; those losses are deeply felt. According to the U.S. Department of Defense, from October 2001 to December 2014, in Afghanistan only, 2,219 American soldiers died, with 1,833 killed in action. The Outpost makes all these men heroes, and Afghans all villains. The elders are traitors and liars; they bring a dead girl to the Americans, claim that the soldiers killed her, and demand a $3,500 payment. When the American commander agrees to pay, Lurie focuses on Romesha’s face—on the disgust and resentment there, like $3,500 is a huge amount, and not a laughable total in exchange for a human life. Consider that since the United Nations began tallying Afghan civilian deaths in 2009, more than 100,000 civilians have died, according to a report released in February 2020. But The Outpost is more interested in mocking the Muslim call to prayer than giving any real attention to the fact that the U.S. military stayed engaged in a losing war for far longer than they cared to admit; there are sporadic moments that speak to soldiers’ trauma, but they’re the exception to the overall narrative. And when The Outpost ends, it doesn’t tell you this reality, either: that thousands of American soldiers are still stationed in Afghanistan to this day.

So, like I said: I’m tired. The Outpost is exactly the kind of movie you can guess it will be. Indicative of the Trump era? Not so much. But emblematic of America’s continued mythologizing about the War on Terror? Absolutely.

The Outpost has been available on VOD and for digital rental since July 3, 2020.