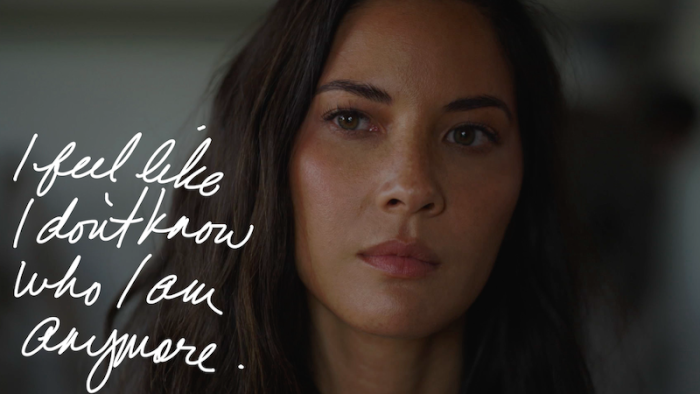 How do you externally represent an internal conflict? How do you visualize a struggle in the mind? How do you create a story where the only villain is self-doubt? Violet, Justine Bateman’s directorial debut, attempts to do just that: Tell the story of a woman at war with herself. The end result is perhaps more intellectually admirable than it is actually enjoyable, but even when the execution is tedious you can’t say the film suffers from a failure of vision.

Olivia Munn stars as the eponymous Violet, a woman who is unhappy with the direction she’s taken in her life, both personally and professionally. Where most stories would attempt to construct a scaffold of traumas and terrible circumstances as reasons for her unhappiness within the plot, Bateman (who also wrote the script) instead focuses on manifesting the internal reality of that unhappiness on screen. There’s an incessant voiceover, provided by a perfectly deployed Justin Theroux, that represents what Violet calls “The Committee in my mind.” Basically, it’s that voice of insecurity that says she isn’t good enough, then steers her toward the safest predictable outcomes. Then, there’s handwritten overlay text that writes out all of Violet’s deepest desires, her hopes and fears, on screen. “I feel like I don’t know who I am anymore,” the text says, and “Why can’t I stop this voice in my head” and “Please don’t go” when Violet’s friend Lila is angrily walking away from her. Yup, Violet’s doubts are given the voice of a domineering man while her desires are given no voice at all. Meanwhile, most of the movie features Violet standing silently while all her internal drama plays out this way. (Munn does a hell of a job face-acting her way through those moments when she is essentially set dressing). At first, this conceit is clever but goes grating as it wears on. It’s fortunate that these stylistic bells and whistles aren’t all that Violet has going for it. The real strength of the film—and the thing that makes all the other flashier stuff work—is the story it all hinges on.

A story where, frankly, nothing much happens at all.

Let me explain: Violet is a mid-career film executive, working in Hollywood and living with her very handsome childhood friend named Red (Luke Bracey). At her job, she has sacrificed her artsy passion projects for more profitable prospects. She’s done the same in her love life, opting to date bigwig studio executives as an advanced form of networking rather than dating, oh I dunno, her very handsome childhood friend who is literally right there, jeez. The inciting incident occurs when her best friend Lila (Erica Ash) reveals that, no, not everyone has a “Committee” belittling them inside their heads actually, and Violet realizes that maybe her life doesn’t have to be the way it is. Maybe it is possible to live without letting fear determine her every action.

The events of the film aren’t eventful, really, since they are purely scenarios for Violet to try, or fail, to go against The Committee and take risks. The plot is built out of small, everyday choices, long overdue apologies, or phone calls she chooses to ignore. It wisely keeps the film grounded in who Violet is now and where she’s going as opposed to getting lost in the past that shaped her. There are hints of backstory, a troubled childhood with an unsupportive family or a consensual office love affair turned toxic, but there’s no grand reveal of any singular trauma that instilled this self-doubt into her. That’s probably the best, truest thing the movie gets right: It refuses to insert some horrible experience to justify Violet’s journey, her need to reclaim herself, to the audience. Bad things have happened and she’s made plenty of mistakes in her life, but they are all somehow banal. They’re normal. Small hurts can cumulatively shape us just as much as big ones, but the point is that nobody needs an excuse to prioritize their own happiness.

That banality is at odds with the very conscious Hollywood setting, which I thought would take a #MeToo turn for Violet. Instead, the setting—aside from being a place of comfort and confidence for Bateman as a storyteller— works to assign Violet an element of privilege that is necessary to underscore the point of the enterprise. Violet is a successful, smart, beautiful woman working in a glamorous industry. “Her life can’t be THAT bad,” we’re dared to think. It puts us in the position of expecting that elusive reason, that justification for her unhappiness, that the film refuses to give. Ignore the voiceover, ignore the text — the smartest thing the movie does to manifest the internal reality of someone crippled by self-doubt is to show that externally Violet seemingly doesn’t have a reason for it. Her life isn’t “bad” but that doesn’t make it good, because happiness doesn’t come from things so easily seen from the outside.

It’s okay not to be okay, and it’s okay to take the risks necessary to help you be okay. You can stand up for yourself against even the most benign slights, and cut people out of your life just for bringing you down. The only person you owe your devotion to is yourself. That is the message that Violet successfully conveys, and while that may not make for the most exciting or even memorable moviegoing experience, I respect the fact that it had something real to say and it found a way to say it. I haven’t heard whether this film has gotten distribution yet, but I know Bateman has written more scripts in the time between when the movie was supposed to premiere at SXSW 2020 and when it did premiere this year, so I doubt this is the last we’ll hear from her. At the very least, it’s clear Bateman can leverage her own tenure in Hollywood to bring in some familiar faces, since the supporting cast for Violet features appearances by everyone from Bonnie Bedelia and Laura San Giacomo to Jason Dohring and Rob Benedict. Not huge stars, perhaps, but just the right level of “Oh hey, it’s THEM!” recognition that gave some depth to the film’s depiction of backstage Hollywood.

This film was was reviewed following its world premiere at SXSW Online 2021.


← 'Rick & Morty' Season 5 Trailer Brings the Parody | Hiring Kevin Spacey for Your New Movie is Bad for People, Bad for Art, and Beyond Justification →