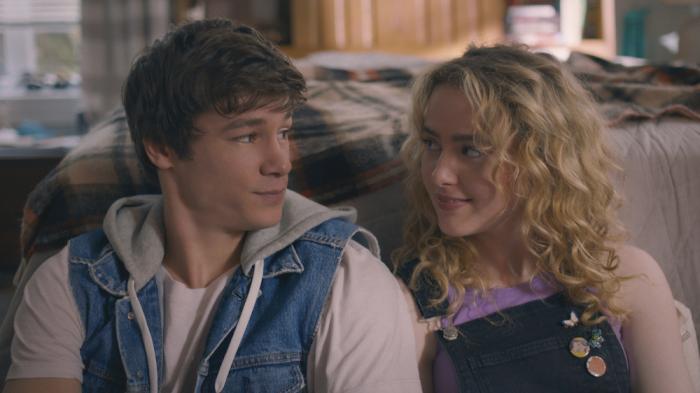 Review: 'The Map of Tiny Perfect Things' Brings Whimsy To Time Loop Romance, And Yet...

Mark is stuck in a time loop. He’s living the same day over and over again, seemingly for no reason. For now, he seems mostly OK with his plight and spends his day executing beat-perfect tricks, answering people’s questions before they ask them, and living with zero consequences. He’s seen enough movies to know that this will get boring very quickly, but he’s not sure how to fix it. Then, without warning, Margaret enters his life, an aloof young woman who, like him, is aware of the ‘temporal anomaly’ that is their new normal. Mark’s excited to have someone to share this cycle with, but she’s hesitant to let him get close. Eventually, however, she relents, and the pair decide to look on the bright side. Even the most normal days have special moments in them, so they decide to track down and document all of the ‘tiny perfect things’ that nobody else will ever remember about the day that may never end.

It’s easy to fall into the trap of comparing every single time loop movie to Groundhog Day. After all, that film executed its high concept gimmick so effectively that all that follows in its footsteps cannot help but feel like minor efforts, even at their best. Still, it’s not hard to see the attraction to this subgenre: the opportunity for showy set-pieces, the inevitable mixture of hilarity and melancholy, and a unique context for a relationship drama. The Map of Tiny Perfect Things is borrowing from the best of them. Based on a short story by Lev Grossman, author of The Magicians, the film is savvy enough to wrap its familiar aspects in charm and an infectious energy that buoys its more derivative moments. It’s no Palm Springs but it’s a solid contender for that comedy’s snarky younger sibling.

Unlike Groundhog Day, The Map of Tiny Perfect Things has a more positive view of its time loop possibilities. For Mark and Margaret, it’s a chance to revel in the silly, the minute details, and the curious optimism such freedom offers. The film opens with Mark living a perfectly timed day, the kind of scene that delights in showing off the dizzying tricks that can only be pulled off when you endlessly repeat the same day. There’s an appealing innocence to Mark’s desires, and they form a much sharper focus of the narrative than any of his personal angst. It’s a refreshing change of pace for the time loop rom-com, where we’ve become curiously accustomed to fatalism and madcap suicide attempts.

Margaret’s story is a little darker. As played by Kathryn Newton (most recently seen in Freaky and set to play Cassie Lang in Ant-Man and the Wasp: Quantumania), she’s less concerned with the fun she could be having than the security of her circumstances. There’s no greater way to escape one’s troubles than to live with the knowledge that there is truly no tomorrow. For her, the stakes of this day matter more than the potential joys that Mark’s peppier outlook offer. His biggest concern is showing the girl he likes his favorite movie (Time Bandits, for those who are interested) and trying out new haircuts. For her, the cost is far more existential.

Most of the brighter moments in The Map of Tiny Perfect Things come when Mark and Margaret just hang out and enjoy one another’s company. It’s the kind of mismatched banter that doesn’t feel especially teen-like but the appeal is strong, nonetheless. It utilizes its familiar set-up as a means to explore adolescent angst, albeit with a perkier tone. Hardened sci-fi fans may be frustrated by the blatantly silly and poorly explained logistics behind the time loop itself (Primer, this ain’t), but it’s clear that the film really isn’t interested in that aspect of its story. The people matter more.

Unfortunately, it drops the ball when it comes to its central pair. Kyle Allen and Kathryn Newton have a sweet sort of chemistry but it’s not romantic in the slightest. When the film tries to force them together, because apparently, that’s what we do in time-loop movies, it’s an ill fit that drags the story into less interesting territory. They seem to do this because it’s expected of them. Hey, you’re in a time loop together so you might as well explore the possibilities of romance, right? That’s what saved Bill Murray, after all. The story’s way of handling this is to fall back on one of our most trite tropes: the manic pixie dream girl. Yup, it’s still a thing. Granted, Margaret isn’t Kirsten Dunst in Elizabethtown or Natalie Portman in Garden State. She’s not here to fix the dude’s life. It’s more that her emotional struggles are used as an impetus for Mark to suddenly realize how mundane his own concerns are. Yet again, a young woman’s pain is just a way for some guy to realize that the universe doesn’t revolve around him. Wouldn’t that have been a great moment for him to understand that he’s not owed a woman’s love? Sure, but then we wouldn’t have the grand kiss that saves the day. It doesn’t make Mark any more interesting, but it does diminish Margaret’s story.

If you have a time loop rom-com itch in need of scratching, then the chances are that Palm Springs will get the job done more effectively than The Map of Tiny Perfect Things, but in terms of the growing pantheon of the teen film of the 2010s and onward, there are moments of pleasure here for audiences in need of a comforting distraction.

The Map of Tiny Perfect Things is available to watch on Amazon Prime on February 12.