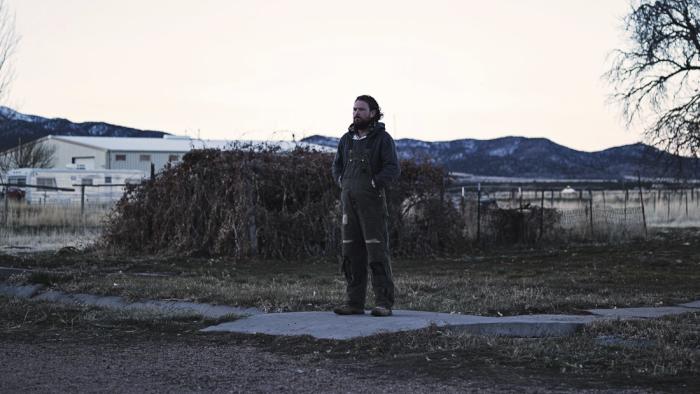 Review: 'The Killing of Two Lovers' Presents A Muddled But Riveting Portrait Of Toxic Masculinity

What does it look like when a life falls apart? From the outside, it might seem positively mundane. There goes a man in a pick-up truck, a furrow to his brow. You see his kids pile out into the park for a day of family fun. You witness his wife giving him hell while he wearily loads junk into its bed. But you’d have no idea about the gun lying under the front seat.

Written and directed by Robert Machoian, The Killing of Two Lovers delicately showcases this conflict between public display and private lives, creating a unique thriller that’s as poignant as it is perturbing.

Clayne Crawford stars as David, a family man who works odd jobs and feels adrift since his wife Nikki (Sepideh Moafi) asked for a separation. High school sweethearts who tumbled fast into kids and marriage, these lovers have lost sight of each other. So, David has moved out of their house and back in with his widowed father, who is gruffly grateful for the company. Though just down the road, David fears his wife and his life are slipping through his fingers. He humbly asks for advice from a friend. He slips over in the night to joke with his boys. He tries to win Nikki back with a song, written and sung just for her. To his family, children, and neighbors, David is a good man, caring, friendly, and not above a doofy dad joke or three. But what about that gun in his truck?

The Killing of Two Lovers is a masterful portrait of male pain and the toxic masculinity that might make it dangerous. Crawford delivers a performance that feels not just restrained but rigorously repressed. His eyes glimmer with agony as his sternly set jaw refuses to cry out. His body radiates with the tension of a man holding back and not letting go. Unspoken are the crushing gender norms of how a man is meant to behave.

With a history in documentaries, Machoian stages his scenes simply, but with a distinct point of view. He rejects the suffocating close-ups of melodrama, favoring wide shots, where the vast plains of Utah serve as an indifferent backdrop to a family in turmoil. Long takes and distanced shots create a thrilling spontaneity, especially when Crawford acts with his onscreen sons (Arri, Ezra and Jonah Graham), who crackle with chaotic energy. The camera set back and watching without drawing attention to itself gives us the viewpoint that might belong to a passerby, a looky-loo neighbor, or the friend riding shotgun in David’s truck. The tone of this thriller is defiantly hushed, creating a sense of slow-burn destined to blow up. The soundtrack is rattle of broken things, perhaps slamming car doors, dropped bottles, or bullets fired. It’s the jangle that might enrage an animal.

Thoughtful production design and location shoots paint David’s world in muted hues: patchy brown grass, grey gravel roads, steely mountains, an icy blue sky. Amid all this, his red truck nearly bleeds onscreen. Little details like the weathered paint at his father’s house, the unkempt snarl of his beard, the holes in his workman’s jumpsuit, signal that he is falling to pieces, even if he can shine it on for his kids. The boys might be fooled, but his teen daughter Jesse (Avery Pizzuto) is a mirror of his rage, sulking, spitting, and erupting over the indignity of having no control over those you love. Through visual clues, Machoian suggests a lot about his heartbroken hero. Yet, he leaves ambiguities that make the film’s opening sequence shocking and its finale frustratingly unsatisfying.

The Killing of Two Lovers begins with a scene that threatens to be titular. David, stands sad and silent, over his sleeping wife, who has a stranger snoozing on his side of the bed. A gun wriggles in David’s hand, he points it at the unaware pair, but then a sound of waking children snaps him out of this tragedy-promising trance. He’ll flee clumsily but successfully, tucking the gun into his truck’s cab, where it will sit out of sight but never out of mind. Over the rest of the film, whether he’s playing with his children, bickering with his wife, or stalking her mystery date, the threat of the gun hangs heavy. Yet it’s not Chekov’s gun we fear as much as the man who might wield it. Which makes all that follows a curious exercise. Does Machoian want us to empathize with a could-be wife-killer? Is he aiming to show us the warning signs that might lead to murder? Or is he arguing that even a good man can be pushed too far?

With much of his film is an evocative and nuanced portrait of a man one the verge of a breakdown, the opening feels crude in contrast. The revelation of a man in a sleeping woman’s bedroom and then the gun, it’s shocking, an excellent hook. But it’s the tawdry gimmick of countless true-crime shows, that make an unsavory meal of murder. The Killing of Two Lovers is not trashy like that. It’s far more sophisticated, refusing to add a sultry filter or a glamorous gloss to its characters and setting. Yet it falls short by delivering a muddled message on male rage.

It’s clear David wants to reunite with Nikki, but woefully unclear what might happen if she says no. Is his pulling out the gun proof enough that he’s a danger? Or is his inability to pull the trigger proof that his rage is impotent? There are scant suggestions that domestic violence is an issue in their marriage. Yet, Machoian’s characterization of David as a caring and devoted family man, who always had a kind word or a helping hand, feels like it could be pulled the interviews of neighbors confounded by the latest family annihilator.

There will be climatic violence in The Killing of Two Lovers, but it’s not what the title promises. Still, shot starkly and performed by a cast dedicated to rugged, ugly authenticity, it is jaw-dropping. But then, comes a resolution that feels anything but resolved. And we’re left to wonder what David’s story is supposed to mean. Is it a tragedy? A victory? A warning? Writing this now, I’m still not sure.

Immediately following the film, I wondered if this opening scene should have been abandoned before the shooting script printed. Is it an elevator pitch that’s outlived its usefulness? The threat of violence doesn’t feel lived-in the way the rest of David’s world does. Instead, it feels like a juvenile fantasy that David can’t quite grasp but can’t let go. Perhaps that’s the point. Maybe Machoian wants us to rattle in this discomfort, unsure of where to place the secret of the gun with the rest of what we learn about this man. Maybe, like the neighbors who gawk from across their lawns, we are only given scraps to understand the complicated inner life of a marriage on the brink of disaster. Perhaps The Killing of Two Lovers is purposefully a puzzle we aren’t meant to solve.

The Killing of Two Lovers opens in theaters and on-demand May 14.


← In Scotland, the Best Photo of the Year (and a Vision of a Better Society) is Born | Samantha Bee Wants To Make Guns Less Cool →