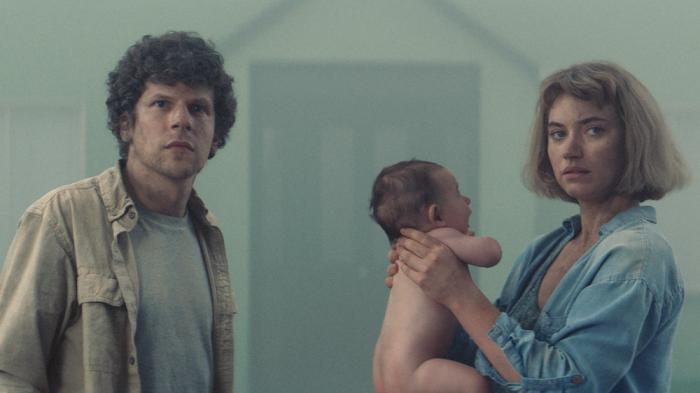 It’s not hard to see why so many people find the mere idea of life in suburbia so petrifying. Not too long ago, the patented and heavily commodified image of the ideal life, as sold to us through commercial and government propaganda, was one of endless rows of identical homes with matching lawns and smiling families. Everything is clean and neat and prepared for you to settle down for the rest of your existence in peaceful, societally mandated harmony. Nowadays, this fantasy holds less thrall for younger generations who have wearily accepted that they shall never be home-owners thanks to dwindling wages and a lack of legal protections. Still, the horror of the ‘burbs lingers for many, signifying the smothering constraints of narrow-mindedness and the chilling stranglehold that the WASP iconography has over us. If you’re one of us avocado-hoarding millennials then you’ll be all too familiar with that conversation where someone, possibly a total damn stranger, lectures you on your future, how you must settle down, and how you’ll definitely want a cookie-cutter life one day, no matter how many times you protest.

Director Lorcan Finnegan and his co-writer Garret Shanley dig into that trap with their latest film, the black comedy Vivarium, a story that wears its many influences on its beige sleeve. Imogen Poots and Jesse Eisenberg play Gemma and Tom, a young couple who seem pretty happy with their current way of life. Gemma is a nursery-school teacher who gets on great with the kids while Tom is a gardener and general odd-jobs man seemingly happy to float through life. Encouraged (read: browbeaten) by a friend into getting their first foot on the property ladder, the couple visits a deeply unsettling estate agent named Martin who looks like a Mormon missionary and has the warmth of an android. He coaxes them into visiting a new housing development named Yonder, but when they get there, he disappears and suddenly Gemma and Tom are stuck in a ceaseless sea of identikit homes with not a soul in sight.

Cinema, especially that of America, is full of stories of the barely-concealed horror of suburbia. David Lynch revealed the white-picket-fence dream to be a cesspool of deviance and hypocrisy in Blue Velvet, although he crucially also had a truly earnest love for that 1950s aesthetic. The Stepford Wives portrayed the overwhelming misogyny of the suburb fantasy, while many an ’80s comedy, most notably The ‘Burbs, mocked the decade’s growing fetish for this ideal. It’s obvious where Vivarium gets its biggest influences from. There’s a lot of The Twilight Zone here, a touch of David Lynch, a sprinkling of Kafka, and a whole bunch of Yorgos Lanthimos. The key difference with this movie is that its tone and humor are bone dry, as if Finnegan is seeking to make something as restricting and soul-sucking as Yonder itself.

Once Gemma and Tom find themselves stuck in their own personal hell, they find themselves inadvertently reverting into gender stereotypes, or perhaps just heightened versions of their true selves, the ones that Yonder demands of its residents. Gemma tries to be reasonable while Tom immediately becomes skittish, rude, and violent. He tries to burn the house down but the next morning it looks untouched. A box is left in front of the house with a baby inside and a sinister note: ‘Raise the child and be released.’ Said child grows at an exponential rate, speaks with a warped voice that sounds equal parts like Tom and Gemma’s, and screams like a banshee until he is fed. After mere days, the happy-go-lucky young couple with everything ahead of them are suddenly trapped in a conformist ideal neither of them wants, one they can’t leave until the human life forced upon them becomes an adult.

That concept is great but the movie has a difficult time sustaining it to feature-length. It works best in short bursts that don’t necessarily work together as a cohesive whole. From a purely design-based point-of-view, the film is unimpeachable, from the homes that look like the ones you find in Monopoly to the pristine clouds that seem to have been hung up in the sky by a designer. The precise blandness of Yonder is in the vacuum-packed food and straight-from-the-showroom decor (even the painting above the fireplace is just a picture of their own home.) The dryness of the entire affair makes some moments feel more like a chore to watch than anything truly substantive, which is a shame because those bursts of sheer unnerving oddness that follow are worth your time. The child provides the most heightened symbol possible for the difficulties of parenthood but where Vivarium excels is in the bluntness with which it admits that sometimes none of these things are rewarding or exciting to some. Raising a child can be the best thing you ever do with your life but for some, it’s the polar opposite, and we’re simply not supposed to talk about that. Tom immediately rejects the child, calling him ‘it’ and threatening to kill him multiple times. Gemma tries to be more empathetic and do what is required of a mother, even as she repeatedly tells the boy that she is not his mother. Her endeavors are futile: No matter how hard she tries, the boy won’t listen or learn. In the real world, this would be enough to have her labeled as a ‘bad mother’, and she seems painfully aware of that.

The undisputed star of this movie is Imogen Poots. An oft-underrated actress who has yet to secure that major breakout role she certainly deserves, Poots is tasked with bringing pure raw devastation to Gemma. Here is a woman who has lived a good life and been a good person, one who knows what she wants, left to rot in the most unbearable of circumstances. While her boyfriend retreats into himself and becomes obsessed with the most pointless of tasks, Gemma tries to cling to her inherent empathy, even as it slowly kills her. Poots strikes the perfect balance of forced optimism and weary nihilism that quickly overwhelms Gemma as their torment continues.

What causes Vivarium to stumble is its many loose ends left hanging by the time the credits roll. Lynch is famous for refusing to offer closure or basic answers to his audience but he seldom promises such things in the first place. Vivarium, by contrast, makes big hints of bigger answers then drops them almost immediately, which proves frustrating given the high stakes it has built for itself. The film certainly captures an existential sort of panic but is less successful when it delves into the more tangible. When Finnegan and Shanley are truly brave, the results are far more satisfying. This is a story, after all, that asks you to confront the notion that true happiness can never be compatible with this pre-packaged capitalist ideal. In this aspect, it’s not just the suburbs that may end up bleeding us of life: it’s everything else.

Vivarium is available to watch now on VOD.