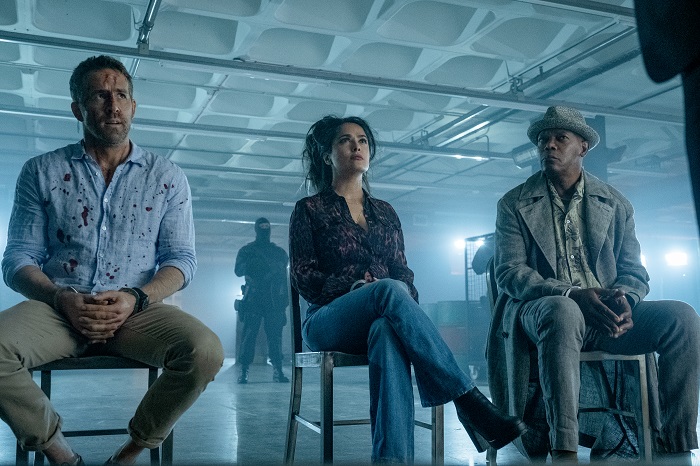 Review: Clearly I Am Being Punished for Something Because ‘The Hitman’s Wife’s Bodyguard’ Is Torture

Living under capitalism means you always have bills to pay. I do not know how else to explain The Hitman’s Wife’s Bodyguard, a movie that convinced me time had slowed to a crawl and captured me in its malevolent molasses grip, aside from quoting the illustrious Christopher George Latore Wallace: more money, more problems. Maybe Ryan Reynolds, Samuel L. Jackson, and Salma Hayek all bought their dozenth homes on an island that is sinking and they need to recoup their investments. Maybe Aviation Gin and Kering both had down quarters because people weren’t buying middle-shelf gin or luxury goods during a pandemic. Maybe Antonio Banderas was like, “You’re going to give Joaquin the Academy Award for Best Actor over me? I’ll show you a caricature of a performance, if that’s what you really want!”

I could forever dream up these imaginary scenarios for The Hitman’s Wife’s Bodyguard, because a movie so mundane and generic defies rational explanation. Kudos to screenwriter Tom O’Connor, who managed to sell a script that is about 60% the words “motherfucker,” “boobs,” and “cucaracha.” Kudos to director Patrick Hughes, who went from the third installment in The Expendables series to his own franchise built on the diminishing returns of brain splatter landing in people’s mouths, Jackson’s cackling vulgarity, and Reynolds’s “Won’t anyone be nice to me?” affect. A character gets hit by a car two different times during this movie and the sparse audience alongside me in the theater thought that was the height of comedy. Even Buster Keaton hearing this laughter from his grave is like, “Guys … chill.”

The Hitman’s Bodyguard was a movie about a hitman, Darius Kincaid (Jackson), and a bodyguard, Michael Bryce (Reynolds), who formed a sort of frenemy relationship after each saved the other’s life. They can’t stand each other: Darius thinks Michael is annoying; Michael thinks Darius is a loose cannon. The woman in the middle of their relationship, Darius’s boorish, spontaneous con-woman wife Sonia (Hayek), obviously loves Darius and takes his side on most things, but she also has some fondness for Bryce.

The Hitman’s Wife’s Bodyguard takes place a year or so after the events of the preceding film. Bryce is in a tailspin after being stripped of his bodyguard license, and his therapist, sick of listening to Bryce’s trauma about his bodyguarding failures, sends him to Europe to distract himself. When Bryce arrives, he’s tracked down by Sonia, who needs his help in recovering the abducted Darius from Italy’s organized crime families. That initial partnership sets off a continent-hopping slog during which Darius and Bryce fight, Bryce and Sonia fight, and Sonia and Darius fight, and Banderas shows up as Greek shipping tycoon Aristotle, who is planning on destabilizing Europe for the financial sanctions they keep placing on his country. There’s a big diamond drill MacGuffin, and Frank Grillo doing a Really Not Good Boston accent, and a surprise supporting actor turn that makes me worry about a certain acting legend’s agent and why they keep booking him crap, and a literal split-second cameo from Richard E. Grant that led me to look him up on IMDb and realize he’ll be on Loki.

Because that is really what The Hitman’s Wife’s Bodyguard is an advertisement for: browsing the Internet. Did you know Salma Hayek has a pet owl? I would rather learn more about it than thinking about how this role requires her to scream a lot in Spanish, be told derisively that she “sounds Mexican” and that she looks “old,” act baby-crazy, and tolerate extremely terrible low-quality pink extensions in her hair. Does she still look flat-out amazing in not just one, but two latex outfits—a deep-V jumpsuit and a bright-blue French maid’s outfit? Of course. Her body is banging. But you do not need to sit through The Hitman’s Wife’s Bodyguard to know that. Remember From Dusk ‘Till Dawn, or or like, any other minute Hayek has been onscreen in anything? Just watch that! 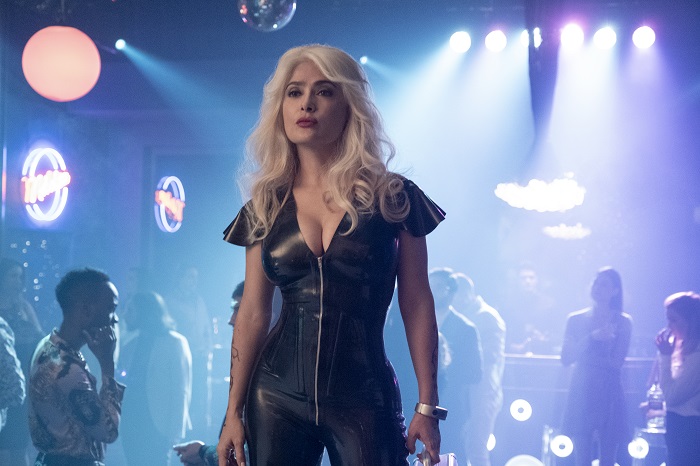 You do not need to sit through The Hitman’s Wife’s Bodyguard for anything, actually. Badly edited action scenes? You could watch Reynolds in the godawful 6 Underground. Want a different flavor of Reynolds, more along the lines of the Jason Lee-lite he does in this movie? Pokémon Detective Pikachu is actually pretty fun. Want to fall asleep to unexciting chase scenes through Europe? Probably every Adam Sandler movie on Netflix has one of those. If you’re somehow not tired of Grillo’s omnipresence, he’s been in three other movies this year and is in five others slated to come out during the remaining months of 2021; roll the dice on any of those instead. And Jackson being a bemused asshole? I hate to suggest a Marvel movie (please forgive me, Marty Scorsese), but that’s basically his whole Nick Fury vibe, or, if you wanted to see him at his nastiest, cue up Quentin Tarantino’s The Hateful Eight.

There are so many movies out there, and so many of them are more worthy of your time than The Hitman’s Wife’s Bodyguard, a punishment masquerading as entertainment.

The Hitman’s Wife’s Bodyguard opens in theaters and IMAX on June 16.

← Remember 'Westworld'? | 'Cruel Summer' Ending Explained: It Was a Simple Misunderstanding (Sort Of) →