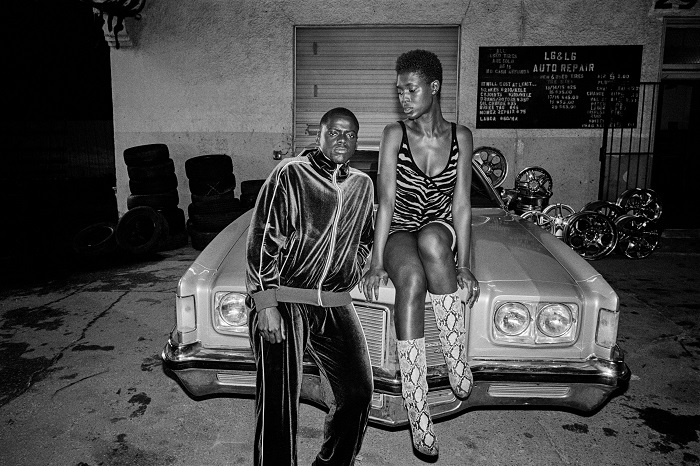 In today’s America—hell, in any version of America—Queen & Slim was always going to be a polarizing film. A dead police officer, check. The omnipresence of racism within structures meant to be protect and serve, check. Commentary on the generational trauma inflicted upon black Americans, check. Observations about the negative impact of military service on veterans, check. Lena Waithe’s script purposefully steers Queen & Slim into a myriad of hot-button issues, mostly offering nuanced observations of what it means to be black in America but sometimes grasping for objectivity that is unnecessary. Still, thanks to a strong vision from director Melina Matsoukas (of Insecure) and cinematographer Tat Radcliffe, the film is a stylish visual feast, an explosion of striking images and gorgeous frames that will sear into your memory.

The film begins with a blind date that is more antagonistic than affectionate: Defense attorney Queen (Jodie Turner-Smith, exemplary) basically tells Slim (Daniel Kaluuya, gentler here than in either Get Out or Widows) that she’s only seeing him because she had a bad day at work. She’s haughty and aloof, judging how he eats, judging his close relationship with his family, judging his belief in God. Slim is more along for the ride, taking it in stride when she incredulously questions whether he thought they would have sex on the first date, laughing it off when she mocks the playlist he made. And that dynamic—her assertiveness and aggressiveness, and his deference and wariness—continues when they’re pulled over by a white police officer on an abandoned city street.

The altercation follows the same formula we all recognize by now: White cop pulls over a black driver. White cop has an agenda. White cop is on a power trip. White cop pulls his gun. Waithe knows the tension of that moment, and our fear as an audience, and initially digs into it. But Queen & Slim flips our expectations (the first of many times in the film) by having the pair fight back. The result is a jarring burst of blood soaking Queen’s all-white outfit, Slim sliding back into the driver’s seat, and the two of them beginning a journey that will lead them simultaneously into the past and the future.

On the road, Queen and Slim try to stay one step ahead of law enforcement and one step closer to Cuba, where they hope to receive political asylum, a la the Black Liberation Army’s Assata Shakur. Their drive toward the coast takes them through recognizably black spaces, many of which Matsoukas treats with reverence and infuses with energy. Colorful shotgun-style homes in New Orleans; a red-lighted nightclub where people of all ages and genders dance together; a field full of horses, evoking the very real figure of the black cowboy in the American West. And nearly every black person they meet is, in whispers and with slyness, trying to help them stay alive. The bartender at the club refuses their money, handing them two glasses poured to the brim with bourbon. Queen’s uncle Earl (played by the scene-stealing and magnificent Bokeem Woodbine) opens up his home to them, and the sex workers who live there (including Indya Moore, who has such excellent presence) take them in. But every step forward has an element of risk, and Queen and Slim are always on the edge of danger.

The movie, like the best road-trip films, has a propulsive sense of energy that is always pushing it forward; no scene lingers too long, and Queen’s brusqueness is integral to keeping the film’s pacing on track. But Queen and Slim falters when Waithe grasps for evenhandedness that isn’t needed for this particular story. “That isn’t always a good thing,” Queen responds when Slim hopes that the people they meet during their escape are black, and the foreshadowing of that line leads to some of the film’s clunkiest moments. A black mechanic who initially refuses to help them because he thinks their killing of the cop has opened up the door for increased police brutality is the father of a son who, in the film’s most tonally discordant scene, embraces violence during a protest. The choice to intercut that scene with another of physical intimacy between Queen and Slim is the film’s strangest decision, but it’s part of a larger pattern in which Waithe tries to complicate the plot with instances of black-on-black betrayal. Her motivation to give voice to both sides, the police and Queen and Slim, manifests in certain moments that feel less authentic than the rest of the story.

That’s not to say that Queen & Slim should suggest that the black community—or any community, really—is homogeneous in its ideas and responses and beliefs, but its infrequent puncturing of that idea is awkwardly handled. The film takes for granted that we will care about Queen and Slim because of the traumatic situation in which they’re trapped, but some of its strongest scenes are when the movie goes further than assumption and lets us get to know the individuals themselves. Slim wordlessly staring at himself in a mirror, examining his face, wondering if he’s changed after taking another man’s life. Queen leaning out of a moving car’s window and into the open air, jettisoning herself into a higher plane. But the film’s attempt to simultaneously create icons out of Queen and Slim and provide enough character development to make them believable individuals and give attention to dissenters who disagree with their actions is clumsy. Those missteps will draw your attention away from the loving care Matsoukas provides to the landscapes of the American South, away from the eroticism with which Queen and Slim dance in that nightclub, away from the haunting nature of the film’s closing track, Moses Sumney’s “Doomed.” “From whence does fulfillment come?” Sumney wonders in that longing, melancholy song, and Queen & Slim is at its best when it paints portraits of black love and black resistance as answers to that question.

← 'Killing Them Softly' Captured the Rage and Resentment of Post-Recession Cinema | Impeachment Witness Called by the Democrats Stoops to Scandalous New Low! →