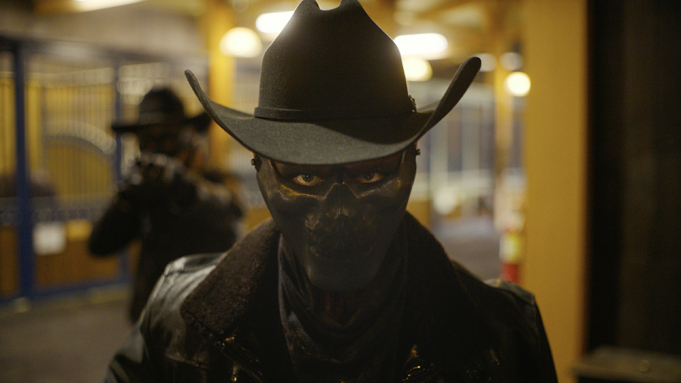 Review: 'The Forever Purge' Hits a Little Too Close to Home

Tell me if you’ve heard this one before: A group of white supremacists rise up against the very government with whom it is allying in order to purge and “purify” America and maintain their power. The rich and powerful within the government work with “working-class whites” against people of color, immigrants, and white liberals. That’s the dynamic at play in The Forever Purge, which went into development nearly two years before the January 6th insurrection and yet is weirdly evocative of that day, right down to the fact that the insurrectionists in The Forever Purge are inspired by the very racism of the very people in power.

I’ve seen all four The Purge movies and both seasons of the series. While I consider myself a “fan” of the franchise, there’s a certain sameness to the previous entries. They follow a similar template: The rich, wealthy men who implemented The Purge did so to thin the ranks of the marginalized by pitting poor people against each other while the oligarchy watches from above in the comforts of their armored homes. Typically, it backfires when the poor and downtrodden turn on the ruling class — the New Founding Fathers of America (NFFA) — and there’s some satisfying comeuppance. Politically speaking, it’s an anti-Nazi, anti-capitalist movie franchise (that’s earned more than $400 million worldwide at the box office on budgets of around twelve dollars).

The last entry, The Purge: Election Year seemed to give the franchise a happy conclusion: A new President was elected, and The Purge was abolished. The Forever Purge is what happens when you get complacent, folks (or your votes get suppressed). At some point, the NFFA reclaimed the country and reinstituted The Purge. The early scenes in Forever are familiar to those who know the franchise: We briefly get to know our central characters and then The Purge begins. Here, Adela (The Army of the Dead’s Ana de la Reguera) and Juan (Tenoch Huerta) are a year removed from crossing the Texas-Mexico border. They’re gainfully employed and making the best of their place in America. Juan is working as a ranchhand for the Tucker family, which includes Dylan (Josh Lucas), his wife Emma Kate (Cassidy Freeman), and the patriarch, Caleb Tucker (Will Patton), among others. The Tucker family is essentially a stand-in for liberal do-gooders, white feminists, and, uh, separate but equal. (Dylan at one point tells Juan that he doesn’t dislike Mexicans; he just thinks that everyone should stick with their own, and Juan — whose experiences with Dylan haven’t been great — begrudgingly agrees).

After The Purge commences, the Tucker family locks down the ranch behind armored walls, and Juan and Adela hole up in a safe house with other immigrant families. When a bus full of Nazis roll by the safe house yapping about purifying America, those familiar with the franchise probably think they know where this is heading: A long night of urban warfare. The twist, however, is that the film quickly cuts to the next morning, where everyone wakes up safe and alive and ready to get back to the business of making America great again.

They soon discover, though, that the Nazis and white supremacists have conspired to continue The Purge. It’s a “Forever Purge,” which is a horror-movie way of saying, “Civil War.” It’s at this point when The Forever Purge falls into those familiar beats, only this time they’re not trying to outlast The Purge. Juan, Adela, and the Tucker family are trying to escape back into Mexico before the borders are closed because America is done. It’s cooked. It’s fallen to the Nazis. The white supremacists are murdering people of color, and while the NFFA has sent out the military to quell the riot, I think we all know what happens when the cops are brought in to protect people of color.

All of which is to say: The Forever Purge is terrifying because it feels dangerously plausible. This is what might have happened if Mike Pence had taken a left instead of a right, or if Eugene Goodman hadn’t been around to save Mitt Romney, or if Donald Trump had ordered the National Guard to stand down and they had listened. The Forever Purge is what happens if Trump — like the NFFA — returns to power and the guardrails of our Democracy finally fall away. It’s what happens when emboldened white supremacists take up arms.

It also happens to be a solid entry in The Purge franchise.