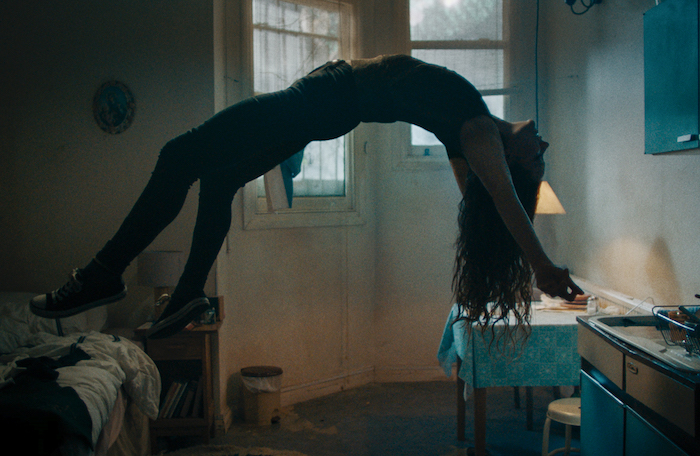 Review: The Devil is in the Details of the Divinely Creepy ‘Saint Maud’

When devout born-again Catholic Maud (Morfydd Clark), a palliative care nurse, arrives at the home of her latest patient, modern dance trailblazer turned reclusive minor celebrity Amanda Köhl (Jennifer Ehle), she thinks she’s finally found a God-given mission. After all, what could be godlier than saving the soul of a terminally ill sinner? While Amanda’s not particularly interested in being “saved,” she is amused enough by Maud’s desire to be her savior to play along—at least for a little while.

In feature debut Saint Maud, writer-director Rose Glass brings a delightfully disturbing haptic sort of horror to the table. Great movies make you “feel” in the emotional sense. Like most great horror films, Saint Maud truly understands how to utilize the tactile notion of the term “feel” to feed its emotional counterpart. It’s a horror of texture and details—the alien surface of bubbling soup, an insect crawling over a bleak expanse of ceiling—of the ordinary and unremarkable defamiliarized to the point of uncanniness. The handful of VFX and SFX moments scattered here and there are utilized superbly, an excellent reminder that instilling cinematic terror is achieved through smart creative and technical choices that cumulatively generate the desired effect and correlate little to the amount of fake blood utilized or CGI budget. The sound design really goes the extra mile here towards achieving these ends; the sharp cracking sounds of one scene involving a particularly crunchy ribcage are now embedded in my brain and show no indications of leaving any time soon.

Films in the general cat-and-mouse folie á deux wheelhouse are particularly at the mercy of their leading performances, and both Morfydd Clark and Jennifer Ehle are absolutely phenomenal here. Clark delivers a star-making performance as Maud, capturing the nuances and near-paradoxes of the young nurse whose meek effect hides a ruthlessly brutal streak. When her aggressive side comes to the fore it does so with startling, yet utterly compelling suddenness. Ehle is always a delight, whether she’s reacting to wet shirt Mr. Darcy or saving humanity from a viral outbreak in Contagion, but Saint Maud gives her a wonderful opportunity to show off a fabulously devilish side as Amanda. The sinner to Maud’s saint, Amanda’s elegant and unapologetic commitment to her vices presents the ultimate obstacle to Maud’s self-denying piety and evangelizing goals. An unstoppable force meets an immovable object with deliciously explosive results.

In a way, Saint Maud presents a fascinating counterpoint to the ongoing trend of retelling history with contemporary sensibilities, seen in such recent releases as The Great and Dickinson, by telling a modern-day story imbued with a practically medieval worldview. Maud sees everything that happens to her—every opportunity, obstacle, and stomach cramp—as a divine signal requiring decoding and compliance. When events fail to congeal into an intelligible message, she spirals down a destructive path of ever-more convoluted thinking, because even the most terrible directions from the most ruthless God are preferable to the unthinkable alternative—that we are all stuck here on this floating space rock without guidance, judgment, or purpose. It’s a crisis-of-faith film that feels at once refreshingly new and intriguingly old-fashioned.

Saint Maud is the anxiety underpinning Pascal’s wager brought to its natural extreme, a film that taps into themes with a rich history and manages to mine them in a delightfully new and intriguing way. As it dives deeper and deeper into Maud’s perspective, the line between fantasy and reality blur to the point of invisibility, but the devilish contention at the heart of the film shines all the clearer: there is no terrible direction more terrifying than the aimless void of having no direction at all.

Saint Maud opens in select theaters and drive-ins January 29, and will be available on Epix starting February 12.

← Twitter Reacts to Reddit Deciding to Crash the Stock Market | The Rise and Fall of Jared Leto, Uber-Method Actor →