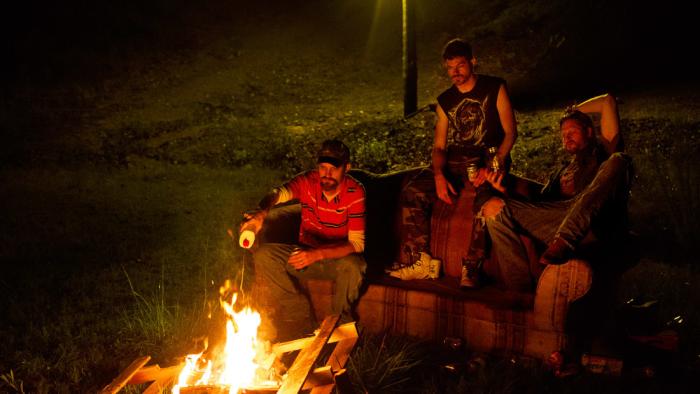 Daniel Scheinert came on to Hollywood’s radar in 2016, when after years of music video making, he and his co-directing partner Dan Kwan unveiled Swiss Army Man at Sundance. The Daniels blew audiences away with the gross but heartwarming buddy comedy that starred Daniel Radcliffe as a talking, farting corpse/jetski. After months of buzz and controversy, this weird and wonderful movie finally hit theaters and blew my mind. So it was with giddy anticipation I sat down at Fantastic Fest for the Austin premiere of Scheinert’s follow-up, The Death of Dick Long. Like its predecessor, it’s a gross but poignant tale of male friendship. But…It no Swiss Army Man.

Written by Billy Chew, The Death of Dick Long begins with a wild night, where three long-time friends decide to “get weird.” We witness rednecks Dick, Earl, and Zeke shotgun beers, smoke weed through a bong-mask, roughhouse around a campfire, and shoot off bottle rockets clutched between their thighs. Then they step off-camera and into a barn, where something deadly goes down. Cut to: Earl (Andre Hyland) and Zeke (Michael Abbott Jr.) high-tailing a bleeding Zeke to an emergency room. Rather than escorting him in, they pitch their pal onto the concrete near the entrance and run away. The next day, they learn Dick is dead. So begins a podunk whodunnit, in which a pair of cops more accustomed to missing wallets than murder investigations strive to uncover what happened to Dick Long.

Lucky for the cops, they aren’t on the hunt for master criminals. Family-man Zeke is in a frenzy trying to cover their tracks, while vape-life bachelor Earl is planning on splitting town. Both get tripped up between a bloody backseat, piss-poor planning, and Zeke’s precious young daughter. Scheinert cranks comedy out of the hijinks of these foolish could-be killers. Zeke’s anxiety leads to gruesome gags involving close calls with the chipper Officer Dudley (Sarah Baker), while Earl’s aggressively blasé attitude makes punchlines out of vape hits and declaring things “tight.” Bringing a Fargo vibe is Dudley and Sherriff Spenser (Janelle Cochrane), who share a folksy charm and a dogged dedication to justice. The former is sweet and a bit slow, while the latter keeps her cards close to her chest. Together they form an affable protégé-mentor bond as they learn unnerving details about the cause of death.

What happened to Dick is not the climax, but a second act reveal that pivots the film into more earnestly dramatic terrain. Realizing their secret will be uncovered, Zeke rushes to come clean with his wife Lydia (Virginia Newcomb). Here, the film shifts focus, from the quirky fun of male friendships to the fallout those quirks can have. This too reminded me of Swiss Army Man, where the bond between its male heroes was built around the love of a woman, who is not a lost lover but a stranger spied on and lightly stalked by a lonely man. In the final act, she discovers some trace of his obsession and looks deeply horrified, but the movie is already pushing past to its strange and strangely uplifting conclusion. Here, the woman who must deal with the troubling center of a tight male bond gets much of the second act to share the trauma of that. And here is where Newcomb snatches the movie away from her co-stars. While Hyland and Abbott are shrewdly funny as these rural f*ck-ups, Newcomb gives The Death of Dick Long depth. The fall of her lip into a stance of shock, the tremble of her big eyes as she stares at a man who went from husband to stranger is so striking that it immediately pivots the tone to something sterner. This shift in focus shows a maturing in Scheinert’s storytelling, even if its inciting incident is perverse and ludicrous (and yet based on a real event!)

In the end, The Death of Dick Long is a solidly fun and fascinating film. Scheinert tells a tale of country crime, love, and loss with irreverence and emotional intelligence. This isn’t just a laughing-at-yokels comedy. He relishes in the eccentricities and communities of this place, displaying a woman mowing a steep hill with the help of a pulling rope as well as the clutch of friends who gather in moments of crisis. Chew gives us goofball heroes who’ve done something wild and wrong, and he lets us revel in their spinning into panic. But then, rather than a simple “lesson learned” conclusion or a jaunty escape, he digs into the inner life of the women around them, making this more than how male friendship impacts men. It’s thoughtful. It’s funny. It’s good. Did it live up to what I’d hoped for a follow-up to Swiss Army Man? No. It’s not balls-to-the-walls bonkers enough for that. But that’s not a failing. It’s a difference. So, manage your expectations accordingly, and discover the joys and tragedy of The Death of Dick Long.

The Death of Dick Long made its world premiere at Fantastic Fest. It hits theaters on September 27.

← Review: 'The Whistlers' Brings Entertainment, Leaves no Lasting Impression | 'Rockula' is the Best Movie About Virgin Vampires Ever →