We are living in a time with an astonishing number of biopics. Perhaps because these are quite often Oscar bait: Green Book won the whole damn thing in 2019; The Irishman and Ford v. Ferrari and Richard Jewell and Dolemite Is My Name and Just Mercy and The Report and Bombshell and A Beautiful Day in the Neighborhood and Harriet and A Hidden Life, among many others, waged their own Academy Award campaigns to varying levels of success. There is an additional layer of import given to a film that is telling you a true story—or at least, someone’s version of the truth—and it helps that awards bodies always reward these people. Renée Zellweger for Judy. Rami Malek for Bohemian Rhapsody. Mahershala Ali for Green Book. Gary Oldman for Darkest Hour. Allison Janney for I, Tonya. It doesn’t end! You could very well make an argument that maybe it’s not acting if it’s just mimicry! I’m not saying that, but like, people do!

There’s a lot of baggage to this genre, to how it’s treated in cinema, and to how it can be ignored by audiences (more people should have seen Just Mercy or The Report, dammit!) while being heralded by awards bodies, and so given all that—I’m not sure what to say about Marjane Satrapi’s Radioactive. On the one hand, Satrapi herself has said she’s interested in working in all genres at least once, and so the French-Iranian director has done animated stuff (the exceptional Persepolis, an adaptation of her own graphic novel) and the fantastical Chicken with Plums (another self-adaptation) and the super bizarre black comedy The Voices with Ryan Reynolds, and now we’re in biopic territory with Radioactive, an adaptation of the graphic novel Radioactive: Marie & Pierre Curie: A Tale of Love and Fallout by Lauren Redniss. I can respect that desire to, as The Strokes put it, try anything once, but Radioactive lacks the passion and depth of Satrapi’s prior work. The same goes for Rosamund Pike’s lead performance. She is outspoken and principled here, playing Curie with ramrod-straight posture and a declarative tone, but extreme displays of emotion, whether grief or lust, don’t quite land. Something is slightly off in her portrayal of Marie; Pike doesn’t quite disappear into the role as she has with past work, and that distance is increasingly distracting.

We all know what intensity Pike is capable of possessing. Who is ever going to forget this Gone Girl moment?

Since then, Pike has bounced around biopics and historical dramas for a while—A United Kingdom, Hostiles, Beirut, Entebbe, A Private War—and she has been quite good in some of them. And I can understand the appeal of Radioactive: A woman directed this project, a woman wrote this project …

[Writer’s note: This is where Roxana checked the IMDb listing for this film to double check her work. “A woman wrote this film, right?” Roxana thought to herself. “The graphic novel was written by a woman. Satrapi was directing. It was an all-woman production … surely?”]

[Two minutes, and one agonized “GODDAMMIT!” yell, later, this is when Roxana realized that Radioactive was actually written by …]

NO. A WOMAN DID NOT WRITE THIS PROJECT. YOU KNOW WHO WROTE RADIOACTIVE? JACK. THORNE.

PLEASE READ THAT WITH VITRIOL AND FRUSTRATION, AND ATTRIBUTE THOSE EMOTIONS TO ME.

Jack Thorne is the worst. The worst! This explains so many of my ambivalent feelings about Radioactive. HOW DOES THIS MAN KEEP GETTING WORK FOR SUCH FLAT, BORING ADAPTATIONS? The BBC/HBO version of His Dark Materials: Snooze. Dirt Music, putting aside my Garrett Hedlund thirst: Snooze. The Aeronauts, the reunion of Felicity Jones and Eddie Redmayne that no one watched on Amazon: Snooze. Thorne came up on Shameless and Skins, and yet each subsequent project has seeped any liveliness or personality from his work. He is now just the British Guy Writing British Stuff, and Radioactive suffers profoundly as a result of his bland script and surface-level interrogation of who Marie Curie was and what she desired. 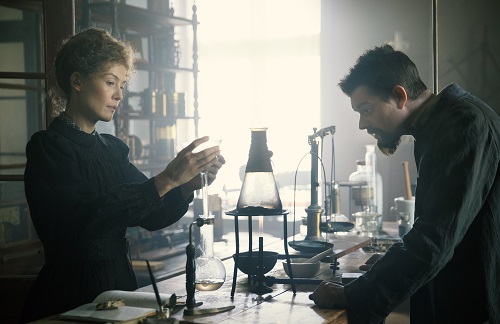 The film begins in Paris in 1934, in the last days of Curie’s life, when the woman born Maria Skłodowska says of her work, “I’m interested in all science.” We then move backward in time to the 1890s, when the male professors and administrators at the University of Paris basically kick out Skłodowska, now going by Marie, for being a woman. They’re irritated by her irritation with their patriarchal narrow-mindedness, and refuse to provide her with the suitable resources and laboratory space required for her research. “I will find my own way,” she insists, and soon she’s partnered up with Pierre Curie (Sam Riley), and they’re working together to use uranium in trying to track down what they believe is another, undiscovered element. The majority of their technical conversations include dialogue like “Your science is brilliant, but so is mine,” and more impactful is how Satrapi shows us the grueling nature of this work, and the physicality required. The Curies crush up colossal amounts of uranium, they boil gallons of solution, they’re in their lab every minute of every hour of every day. They butt heads, but yes, they fall in love, and to Pike and Riley’s credit, their chemistry has a soft familiarity about it. “I thought I was finished with women,” Pierre admits after their wedding; “From what you told me, you barely started with women,” Marie replies with a smirk. There’s a camaraderie between the pair that makes the first half of the film, the one attuned to the rhythms of their work, buzz along fairly well.

But where Radioactive stumbles is in tracking the fissure that develops between the couple, because so little interiority is given to either Marie or Pierre. I blame Thorne’s script for this, since it’s a similar issue plaguing The Aeronauts and His Dark Materials in particular. Marie wants to be respected, and she rages about feeling limited as a woman, but there’s nothing specifically personal about her characterization. We see how she’s dismissed in her time—although she wins two Nobel Prizes, she’s not invited to Stockholm to accept either of them—and how increasingly obsessive about her work she became as a result. The connections for cause and effect are there, but they’re too pat in their construction; are the complexities of a brilliant mind and a beleaguered life really so neat? At the TIFF screening I attended of the film last September, there was much giggling throughout the theater when Marie takes a little vial of glowing green uranium to bed with her, cradling it every night as a reminder of her efforts. There is something tragic in that moment—a phenomenal sadness to how Marie needed to have a physical representation of her triumphs close to her at all times—but Radioactive doesn’t have the narrative depth to make that moment anything more than snicker-inducing. 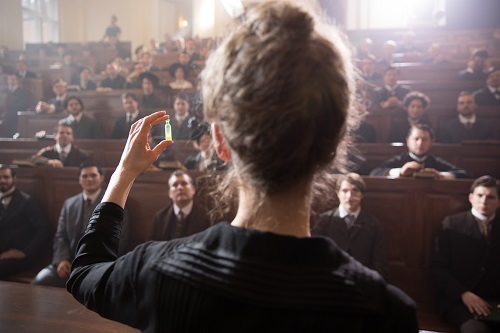 Satrapi’s strongest touches are the unexpected ones, in particular Evgueni and Sacha Galperine’s gorgeous, theremin-heavy score, and how the film jumps back and forth between Marie’s story and future scenes that demonstrate the power of her discoveries of radium and polonium. It’s a shaky choice because the returns to Marie’s toils are always abrupt, but the approach helps us grasp the real power of what Marie was doing and how deeply her discoveries would change the world. We see radiation being applied to a tumor in Cleveland in 1951; the atomic bombing of Hiroshima in 1945; how radioactive materials were used to jazz up matches and cigarettes and toothpaste; the Chernobyl meltdown of 1986; the destruction of a mock suburban town at the Nuclear Test Site in an abandoned desert corner of Nevada in 1961. (Yes, you can take that mention as your reminder to watch Twin Peaks: The Return already.) Each of these forays forward underscores the danger of Curie’s work, and how exposed she and her fellow scientists were in their research. But it’s a failure of Radioactive, and Thorne’s script, that those scenes without Curie are more memorable than the ones with her. The limitations of the biopic formula do a disservice to Satrapi and Pike both.

← Review: Made in Quarantine, 'Host' Is A Way Better Horror Movie Than It Has Any Right To Be | Trailer Trash: Teenage Bounty Hunters Vow to Exploit the Comey Rule to Break Chemical Hearts One Miami Night →