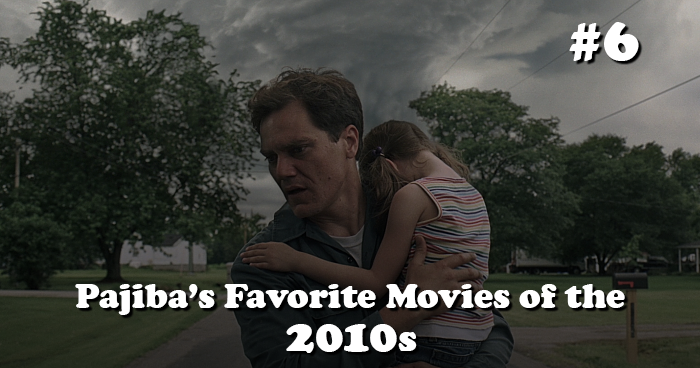 If you ever encounter a self-righteous book snob who tries to convince you books are superior to movies because movies can’t really get inside a character’s head, just tell them to watch Take Shelter and get back to you. To be fair, getting a film to a place where you truly know a character, not just like a good friend whose behavior you can (mostly) predict, but so well that a glance in a particular direction is enough to tell you exactly what they’re thinking, isn’t easy. Only a very select few get there, but those that do are nothing short of magical, and Jeff Nichols’ utterly astounding sophomore feature is there with bells on.

Take Shelter revolves around a small-town man, Curtis LaForche (Michael Shannon), tormented by visions of a cataclysmic storm that could be a family history of mental illness rearing its ugly head in the shape of paranoia — or, just maybe, they’re prophetic? The story is driven almost exclusively by internal conflict, and one of the few films in recent memory to accomplish such a feat impeccably without the use of voice over. To be clear, I’m not staunchly anti-voice over, though I do feel for every film that makes innovative use of the technique there are twenty more that use it as an easy way out. The point is that Take Shelter manages to put you utterly and completely in Curtis’s shoes and so in line with his thoughts that, by the end, just the slightest glance conveys multitudes with windowpane clarity without the use of voiceover and that is absolutely astounding.

I could write a book about all the things I love about Take Shelter, from the smallest of details to film-spanning themes, strokes of narrative genius, and impeccable craftsmanship. But if I had to pick one word to describe the sum of the film’s many virtues, it would be eloquence. Take Shelter is an eloquent portrait of fear, and that is no small achievement. As FDR so famously said, “the only thing we have to fear is fear itself,” but most evocations of this hugely popular quote scrap the rest of the sentence, where Roosevelt elaborates on how “nameless, unreasoning, unjustified terror” is the thing to be feared because it “paralyzes needed efforts to convert retreat into advance.” Fear is intoxicating; it clouds our judgment, freezes us, sabotages any efforts we might make to combat it. Fear is one of the greatest obstacles we face, and its suffocating nature makes it a singularly difficult subject to tackle, particularly with any sort of nuance or artistry.

While on one hand, it’s very hard to find the words to talk about the subject, on the other, fear is quite easy to wield as a blunt instrument, and films do so all the time. Plenty of entries in the horror genre use fear for fear’s sake; many films made with politics in mind use fear towards far more pointed ends, sometimes even with despicable real-world consequences (see: The Birth of a Nation). Uneasiness radiates from every frame of Take Shelter like a foreboding sun, but it’s not a film designed to scare. Instead, it’s a finely wrought exploration of what it means to be scared, to live in a frightening world where the only thing that’s truly certain is the continual presence of nerve-wracking uncertainty. It’s a film about a man who finds himself gripped by a paralyzing fear caused by something that is ultimately, epically, beyond his control. He tries to fix the unfixable anyway and only breaks things in the process. But he keeps doing what he can, and he learns what he can, and evolves. Learns what he can do that won’t actively destroy what he’s trying to save, even if, in the end, he can’t actually stop his fears from coming true.

Introspective journeys starring white guys have a way of being some of the whiniest navel-gazing you could ever have the misfortune to come across — hey Joker, ‘sup American Beauty — but Take Shelter avoids all the typical pitfalls and pratfalls as it’s not a film about blaming the world or expecting women to do all the emotional heavy lifting. Curtis’s wife Samantha (Jessica Chastain) loves him but also respects herself; she supports her husband by giving him an extra push to seek the help he needs, machismo be damned. She’s supportive but, contrary to what so many other films would have you believe, that doesn’t mean serving as a porter for all her husband’s emotional baggage. Curtis’ actions have consequences, for himself and others, and Take Shelter does an excellent job in depicting both his struggles and his mistakes in a way that is utterly empathetic without romanticizing his Quixotic efforts.

When I’m in a particularly low place, feeling especially afraid or uncertain, I often find myself returning to Take Shelter, not because it makes me feel “better” in a traditional sense, but because seeing the profound emotion presented so beautifully in this film makes me feel seen in ways that are deeply comforting. I honestly don’t recall how many times I’ve seen the film at this point, but the end always leaves me with the same, somewhat paradoxical feeling that no other film I’ve ever seen has managed to inspire: on a superficial level, the awesome yet eerie chill one feels at the experience of encountering something genuinely sublime and, below that, the profound calm that comes from encountering a work that utterly resonates on an emotional level. Take Shelter is movie magic of the most profound kind.